The Eagles' quarterbacks all love each other: Maybe the Birds deserve some credit 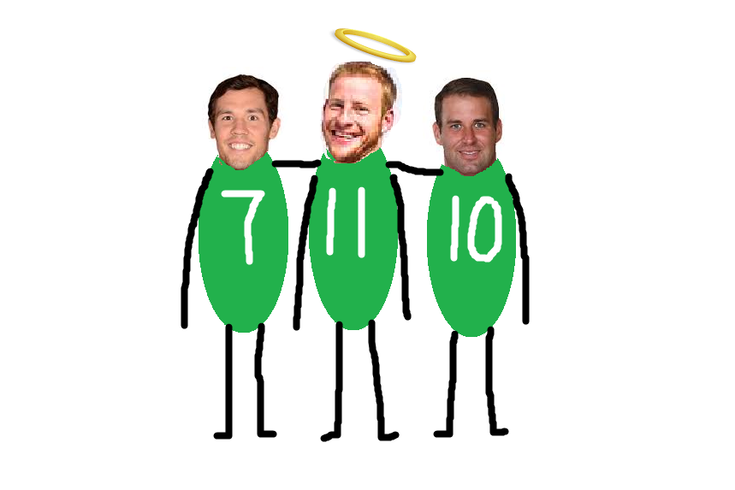 On the third day of media-attended Eagles OTAs, we witnessed the first fight during practice of the season, and no, it wasn't Sam Bradford vs. Carson Wentz, although that would have been awesome. (It was DT Mike Martin vs. OG Allen Barbre, for the record).

Instead, the Eagles' quarterbacks painted a picture of love and harmony between each other, despite the abnormal circumstances surrounding that positional group this offseason.

"They're great dudes," said Bradford. "We actually have a really good room. Having Chase (Daniel) in the room for me and Carson both has been great, just because he's been in this system for three, what, this is his fourth year in the system? So he understands some of the smaller details ... like when we watch tape he's able to point out things. Like, 'Hey, in the past this play has looked like this vs. this coverage. You can short-cut this read and get back here a little quicker vs. this coverage.' So I think that having him in the room for me and Carson has been really good.

"And then obviously Carson, he's been great. He's a great kid. He's really talented. It's been fun working with him, trying to help him, just trying to share bits of information that I've picked up along the way."

Wentz had nothing but love for his quarterback brethren as well.

"So far it's been great," he said, "working with Sam, working with Chase. We have an awesome quarterback room. Awesome discussions about the playbook, about life. It's been great. And then on the practice field, they've been great for me. We've had a really good relationship, so nothing but great things to say about both of those guys.

"The relationship we have between us three is huge. We're not out there to get each other. We're out there to make the team better. It not only uplifts the team, it makes us individually better. Being able to work together and not having to stress about that other stuff.

"With Chase and with Sam, they've both given me help with some nuances to the system, some little things, as far as some timing aspects and both have been great with helping me further understand and take it to the next level right away."

The Eagles' plans for the quarterback position may seem imperfect to some, but in an ideal realistic world, the best outcome for it this season is as follows:

When Bradford essentially went on strike after the Eagles traded up to the No. 2 overall pick, the above plan felt unrealistic. Credit the Eagles for handling that situation with the calm demeanor that they did. The Eagles maintained that Bradford was the starter and welcome him back, as they repeatedly stated, "with open arms."

With Bradford back on board (or at least doing a good enough job faking it), the Eagles have a better chance at achieving the above best-case scenario quarterback jigsaw puzzle.