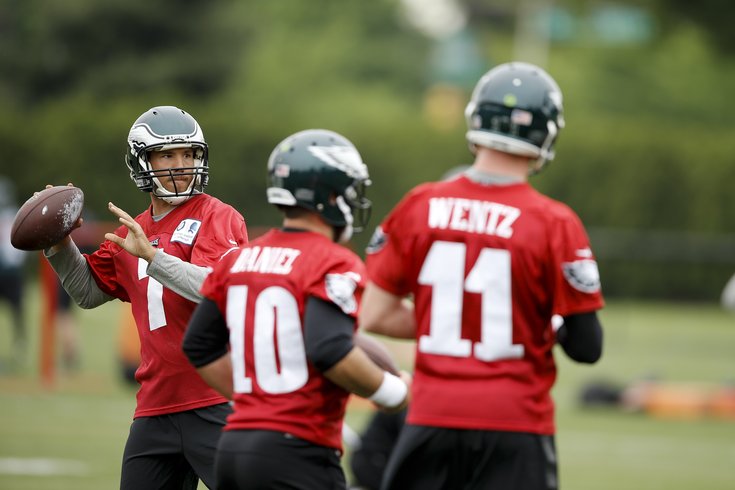 Is it way too early for a 53-man roster projection? Yes. Yes, it is. However, in an effort to enjoy my Memorial Day weekend, I needed a topic I could post about whenever (that's called evergreen journalism, for those of you in school), so I wrote this last Thursday. And you know what? You'll read it and like it!

Obviously, the Eagles' three quarterbacks will be Sam Bradford, Chase Daniel, and Carson Wentz, and probably in that order. The Eagles will (smartly) take their time with Wentz, who may not even be active on gameday.

The Eagles are kind of a mess here. Ryan Mathews has not been able to stay healthy throughout his career, Darren Sproles is not a traditional running back who can carry the load if Mathews goes down, Wendell Smallwood has a long way to go with pass protection before he can get a heavy workload, and Kenjon Barner is inconsistent. There's a decent chance the Eagles will add a stable veteran to the mix before the season begins.

I think Josh Huff takes a tumble on the depth chart, but survives cuts.

This one is easy. I'll note that Trey Burton could also get work as a fullback.

The offensive line is the toughest call on the team at this point. Allen Barbre could start... or he could get cut, and everything in between. Isaac Seumalo and Stefen Wisniewski feel like locks among the reserves, with Halapoulivaati Vaitai and Dennis Kelly not far behind. We'll stick Darrell Greene in there as well, since he was the highest paid undrafted free agent in the NFL.

Don't pay much attention to Brandon Graham not being listed here as a starter. Graham, Vinny Curry, and Connor Barwin should see a healthy rotation of snaps. This is the last chance for Marcus Smith. The Eagles redshirt Alex McCalister in this scenario.

The Eagles' starters at linebacker are set, but they severely lack depth.

To begin, I think the starting job opposite Eric Rowe is Leodis McKelvin's to lose. I also believe Jim Schwartz imported Ron Brooks for a reason. I like his chances of being the primary slot corner better than JaCorey Shepard's. Nolan Carroll will resume his 2014 role as the dime LB while Jalen Mills and Jaylen Watkins (a Howie fave) give the Eagles cornerback/safety versatility.

The starters are set with Malcolm Jenkins and Rodney McLeod, who Jim Schwartz thinks could be among the best safety tandems in the NFL. The Eagles will also keep Blake Countess, who like Jalen Mills above has cornerback/safety versatility, and special teams stud Chris Maragos.