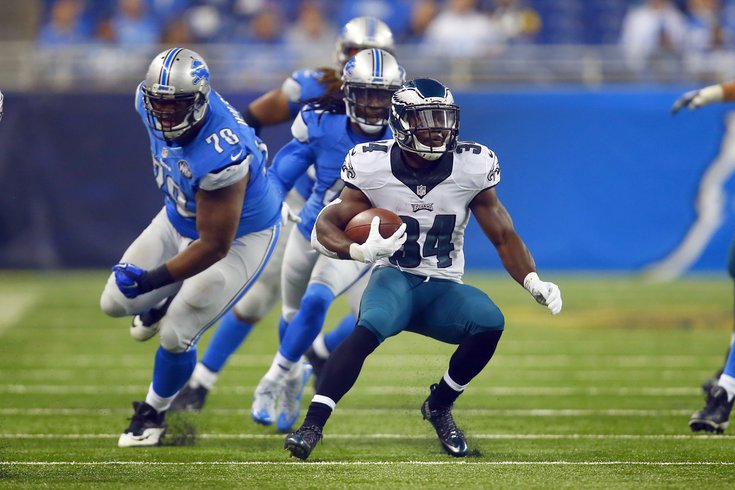 Kenjon Barner will have to convince the Eagles not to sign a veteran back off the street.

One of the Eagles' biggest concerns heading into the 2016 season is at running back, where the Birds are very thin. The starter will be Ryan Mathews, who has struggled to stay healthy his entire career. Behind Mathews is Darren Sproles, who is more "offensive weapon" than traditional running back, and rookie fifth-round pick Wendell Smallwood, who still has some nuances to learn about the position.

Mathews, Sproles (barring a surprise trade) and Smallwood are all locks to make the team, but certainly, the Eagles would love to see a player beyond those three step up and show he can provide depth. Many have earmarked third-year RB Kenjon Barner to be that guy.

When asked about how Barner looked so far this offseason, head coach Doug Pederson said that Barner is "having a good spring," but did not offer specifics on what he has liked.

Barner will head into 2016 Eagles training camp on the bubble to make the final 53-man roster as he was a year ago. In the preseason game against the Colts, Barner had a 93-yard punt return for a touchdown that unquestionably helped him secure a spot on the team.

While he showed a glimpse of playmaking ability against the Colts in August last season, Barner did not take full advantage of his opportunities in the regular season a year ago.

The biggest mistake was against the Patriots. The Eagles had a seven-point lead and the ball at the New England 28 with just over a minute to go. The Patriots had no timeouts and no hope. The one and only thing you cannot do in that situation is fumble ... and that's what Barner did.

Barner was fortunate that the Eagles defense got a stop on the ensuing Pats drive, but that is really just an unforgivable play.

As a receiver, Barner struggled. He caught nine passes on the season, and couldn't make much happen with them after the catch, gaining just 22 yards (a 2.4 YPC average) and one first down. He also had three drops on passes that are as easy as it gets in the NFL.

As a returner, Barner wasn't much of a factor. Against the Redskins, the Eagles tried to run the same trick play the Rams successfully ran against the Seahawks last season, but Barner lost three yards on the return and was flagged for an illegal substitution penalty. The Eagles were lucky it wasn't 4th and less than 5, or it would have resulted in a first down for the Redskins.

Barner's 2015 season is, of course, a small sample size, but there were far too many glaring mistakes for the amount of time he got to play.

With an injury prone starter at running back and a pair of backups in Sproles and Smallwood who are not built (or ready) to be three-down backs, the Eagles need a reserve who can be competent as a runner, as a receiver, and in pass protection. Barner must show the new coaching staff that he can do all three consistently.