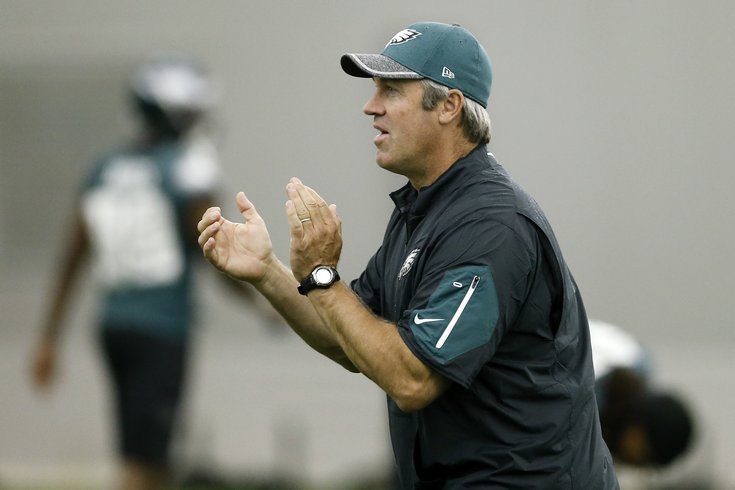 Eagles coach Doug Pederson looks on as his team puts in work during Friday's practice.

Philadelphia Eagles head coach Doug Pederson addressed the media for the final time during OTAs on Friday -- don't worry, they're back at it on Monday for mandatory minicamp before disappearing for about six weeks until training camp. And while the big stories involved the quarterback situation and the continued absence of two former Pro Bowlers, there was plenty to digest from the coach's final presser of this period of the offseason program.

Let's take a look at some things that stuck out.

This should come as no surprise, given that Pederson spent the first seven years his NFL coaching career learning under former Eagles coach Andy Reid. And when meeting with the media on Friday, he began in a way that was very familiar to those who covered the team prior to the Chip Kelly era.

"Before you guys ask questions, just wanted to update you on a couple guys that haven't been out there injury-wise," Pederson said, before going into the list of guys that have been absent from practice for injury reasons, unlike Fletcher Cox and Darren Sproles.

Here's what he had to say about the four injured Birds -- two on offense and two on defense.

•   WR Reuben Randle -- "Reuben Randle, you know, had the gallbladder surgery and he, too, will be back out there on a limited basis, but you'll see him in the warm-up individual portion of practice and then he’ll be limited in the team-rep portion."

•   CBs Nolan Carroll and JaCorey Shepherd -- "Then the two guys on defense, Nolan Carroll and JaCorey Shepherd, both of those guys have been cleared for team activities next week and we'll monitor their progress. They are doing extremely well. They are doing warm up and individual during this Phase 3 portion of practice during the offseason and they will be ready to go next week. So just wanted to update you on those four guys."

Unfortunately for Pederson, he failed to nail the dismount with a "Time's yours" that would have almost certainly sent the reporters present into a PTSD-like flashback to Reid era.

2. Pederson, not OC Frank Reich, will be calling the plays.

So far in practice, offensive coordinator Frank Reich has been calling the plays for the offense. But that's going to change according to Pederson, who had a very simple explanation for why that's the case during these offseason workouts.

"It's hard for me to call plays because you're trying to watch practice both offensively and defensively and special teams," Pederson said. "So right now, it's good that he can actually use that communicator so the quarterbacks can hear his voice in their helmets and we'll continue that through training camp."

But when game time rolls around, it will likely be the head coach and not the coordinator presumed starter Sam Bradford will be hearing in his ears. Pederson didn't rule out that changing, but much like he did under Reid in Kansas City, Pederson will be the one deciding which play the team runs next.

"Yes [I will be the one in Bradford's ear]," Pederson added. "And those are some things we have to work out with the headset and equipment and all that, but yeah, there's that possibility that they will be -- they are hearing my voice anyway because I'm continually just talking to them -- I'm standing closest to the huddle. We are still communicating that way. As long as Frank and I are saying the same things, it's just a different tone."

3. The depth chart is fluid.

A lot was made last week when both coordinators -- Reich on offense and Jim Schwartz on defense -- hinted at the idea that the starting quarterback situation wasn't quite as set in stone as Pederson would have you believe.

Since before the team drafted Carson Wentz with the No. 2 overall pick -- and even after Bradford left to clear his mind grapes -- Pederson has stood behind the former No. 1 pick. And while he was quick to hammer home that point again on Friday, he did provide some clarification as to what his coordinators meant when they said it was still an "open competition" for the role of the team's starting quarterback.

And if you're all familiar with the competitive nature of an NFL locker room, Reich and Schwartz weren't undermining their boss, just simply stating the same philosophy, one that applies to every position, in a somewhat different manner.

"It's still a competition," Pederson said. "Listen, I brought guys in here at all positions for competition. That's what makes you better. Iron sharpens iron. Don't misunderstand what we're saying. Competition at every position -- quarterback's not -- I've played the position. [In 1999] Donovan McNabb was drafted to take over my spot eventually. That's just the nature of the deal.

"But competition is great. It helped me as a quarterback. I look at what Sam's done and he's taken this thing and run with it. It's unbelievable what he's done. I'm so excited about the direction he's going, and the stuff that he's doing on the field right now are the things that I expected and what I saw at the end of the season last year from Sam Bradford. And my message has always been, ‘Don't look over your shoulder, look forward,’ and that's what he's done. He's embraced it."

Basically, Pederson wants us to slow our collective roll in freaking out over every comment made regarding "competition." And as far as the players are concerned, not only should they expect competition, but they should embrace it and use it as a motivational tool to improve their own game.

"Just understand that that's part of this business and right now, during the offseason, OTAs and even the first part of training camp, you want to see what guys are made of, and you know, give everybody the best shot to be your Day One starter come September 11."

4. He loves him some Sam Bradford.

As alluded to above, Pederson again stated that Bradford was -- as of this moment -- the team's No. 1 quarterback. And as you can see in his answer about competition, he's pretty high on his starting QB who has been doing "unbelievable" things so far this offseason.

Doug Pederson is post-Packers-preseason-game high on Sam Bradford. I wonder how long that lasts…

"One is leadership," he said." The fact that he's embraced that huddle. It's his huddle. He steps in every day when we get ready to compete and he's aggressive with the guys in the huddle and that's great to see from your leader and from your quarterback. The way he has anticipated throws, his accuracy on throws, how well he sees the field. He throws a nice ball; a nice, deep ball; Things like that have really made him the guy that I knew he was. Those are things that are exciting, finishing up our off-season and getting ready for camp."

But given Pederson's overly positive way of talking about all his players, including his other two quarterbacks, is this just coach speak that helps build confidence in his starter? Or has the 28-year-old, participating in his first full offseason program in quite some time, separated himself from the others?

"I think so. I think [he has separated himself]," Pederson added. "I think he's done an outstanding job. Again, when you're spreading reps equally, with three guys, that's what you want to see, and I think he's really done a nice job and taken that next step to be the leader of this football team and be the starter, and he's done a good job there."

5. Actually, he loves him some everybody.

Peterson's praise wasn't limited to Bradford. In fact, it was quite the opposite. Nearly every player the rookie coach was asked about has been just killing it so far during OTAs.

•   Sam Bradford -- "I feel like Samis doing exactly what I've expected of him and what he's expected to do. He's having an outstanding offseason right now. These OTAs have been great for him."

•   Chase Daniel -- "I think Chase is right there as the backup right now and he's pushing and challenging Sam from the aspect of not only on-the-field stuff, but in the classroom, as well.

•   Carson Wentz -- "He's so smart and sharp that he's really picked [the offense] up well. The retention level's there. ...  And then just his athleticism. You've seen that a couple of times in practice with the way he can either scramble or on a particular zone read, one of our RPO-type plays [run-pass option] where he has a chance to run, you're seeing that, and those are the flashes that you want to continue to see with him. It's all part of his growth, all part of the development of him and just understanding our offense."

•   Even the QBs as a whole -- "The room has a lot of great conversation, a lot of great dialogue, bouncing ideas, coming to me with ideas about plays and situations. It's been everything I've expected."

•   Kenjon Barner -- "Kenjon is having a good spring. Really been excited about him."

•   Wendell Smallwood -- "Wendell is picking it up well and having a good spring, also. I like the way he runs routes out of the backfield. He's got great hands and I think it's something that is just a gift that he has and something that we actually saw when we were scouting him this offseason."

•   Jordan Matthews -- "Jordan, again, he's been good on the outside. He's better inside because he’s got that big body and he knows how to sort of use it in space. One thing that he can do, particularly in tight areas, is separate from man-to-man type coverages. That's one thing we've seen [from him] this spring from the slot position. Again, he’s a position-versatile guy that you can move around. ... I've been excited about him and his work ethic and the way he challenges his room and his guys each and every day out there on the field."

•   Chris Givens -- "Chris has been one of those guys that added depth at the spot. I like his speed and athleticism. He's a veteran player who obviously has played in several games and has that experience there. But has really done a nice job in these nine OTAs with today being the 10th one, but I feel like he's a guy that's really going to help us down the road. With his continued growth in the offense, just expanding his role a little bit and he's a guy that you can really move around and utilize his speed in different aspects of your offense."

•   Stefan Wisniewski and Jason Kelce -- "He's really done a nice job at both positions. Kelce is definitely a solid, solid center and it would take quite a bit to knock him out of that spot."

•   Leodis McKelvin -- "The way he practices; the way he thinks the game; he's smart. He brings an edge to that position. Brings an aggression to that position. And, you know, needing depth at the time, the availability of a guy like Leodis with his experience really intrigued not only him but myself to go ahead and get another veteran guy in here with a group that's fairly young."

So there you have it. It's apparently always sunny in Doug Pederson's Philadelphia.