Eagles' Pederson: Bradford is our starting QB, and he's not going anywhere 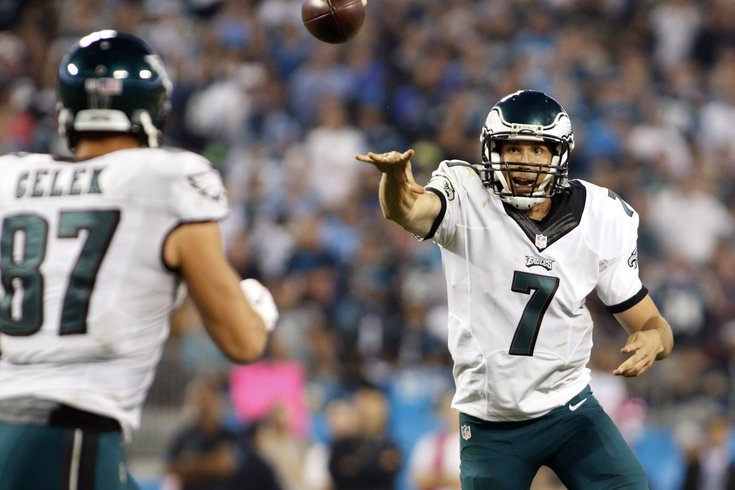 Before he even opened the floor for questions at Thursday's press conference introducing the Philadelphia Eagles' latest free agent signings, head coach Doug Pederson made his thoughts on the team's quarterback situation quite clear.

After talking briefly about the players he and GM Howie Roseman added a day earlier, the first year coach said Chase Daniel, who was Alex Smith's backup under Pederson in Kansas City, was brought in to do the same for Sam Bradford.

"Right now, going forward, Sam Bradford is the No. 1 [quarterback]," Pederson told the media at the NovaCare Complex. "Chase Daniel is the No. 2 and then we're working on a No. 3. So I just wanted to put that out there. And we feel like – and I feel like as the head coach of the Philadelphia Eagles – that we've really given ourselves a great opportunity at that position.

"It just goes without saying, being a former quarterback, being a former backup in this league, having two guys – we're always going to go out and get the best players at every position. You see what we did in free agency these last couple days. We went out and we found the best players. We signed our current guys, and then we went out and found guys that can be solid starters and/or backups on this roster."

When asked if he felt the need to clarify that up front due to media speculation following the three-year, $22 million deal ($12 million guaranteed) Daniel agreed to on Wednesday, Pederson said it had "a little bit" to do with it, but it was more than that.

"I also truly believe – and I've said this all along with Sam Bradford – with the opportunity that he has in front of him and what he did last year and where he currently is on our roster as the No. 1, I felt like that was the best thing going forward, saying that," Pederson added. "And it eliminates any distraction going forward. Now we just go out and play ball from here."

It remains to be seen whether or not that third-string quarterback will come in the draft, but for now, it appears Mark Sanchez, who started multiple games each of the last two seasons for the Eagles after the starter went down with an injury, is on his way out of town.

"Right now, [Sanchez] is still on the roster and it's part of the evaluation process," Pederson said. "He could be the No. 3, but as for right now, were still evaluating that position as we do all the positions and will continue going forward."

Pederson also shot down the notion that the Eagles would field offers for Bradford and, since his first bonus isn't due for another week, trade him without it costing them much financially.

"Sam is our No. 1," he said when asked about the idea of trading the former Heisman winner. "So we're not entertaining any offers."

As for Daniel, who also met wit the media on Thursday, he plans on competing for the starting job.

"I wouldn't be in the NFL if I didn't think I could be a starting quarterback in this league," Daniel said when asked about his coach's comments. "Now, there are certain steps you have to take to get that opportunity, and I'm looking forward to competing here."

That's not because he selfishly wants the job for himself, but because he believes that he can push Bradford to work harder and become even better, something he expects to see at every position. Not just quarterback.

"That's what makes a team special. When your backups are competing to become a starter and take that stater's job, that starter has to work even harder to hold on to his job. So competition breads excellence. I truly believe that. I go back to my time in New Orleans with Drew [Brees]. I'm a second-year pro, he's a 10-year vet and future Hall of Famer. And I'd tell him every single day when I walked past him, 'I'm coming to take your job, dude.'

"I don't care if you're Drew Brees or who you are, my mindsets not going to change. You know, we're the best of friends, still. It brought out the best in us. It made us closer. And it made the team better."

Perhaps there's a reason Pederson likes this guy so much, beyond the fact that they were/are career backups: they think alike. Here's the coach on the subject just a few moments earlier:

"Nobody makes the roster in April. The one thing we're going to continue to do as long as I'm the head football coach here in Philadelphia is we're going to continue to improve our roster. And, you know, competition [does that]. Iron sharpens iron, at every position. And I don't think the quarterback position is exempt from that, even though I was a quarterback in this league.

"You have to create opportunities for your guys to compete against one another -- OTAs, training camp, regular season -- and then you're going to put the best 11 on the field."

So it seems that there won't be an open quarterback competition -- Pederson did say multiple times that Bradford was "the No. 1 right now" -- but that won't stop Daniel from competing for the starting job.

Both player and coach seem to think that's the best path toward success.