What are the Eagles options at pick No. 8? 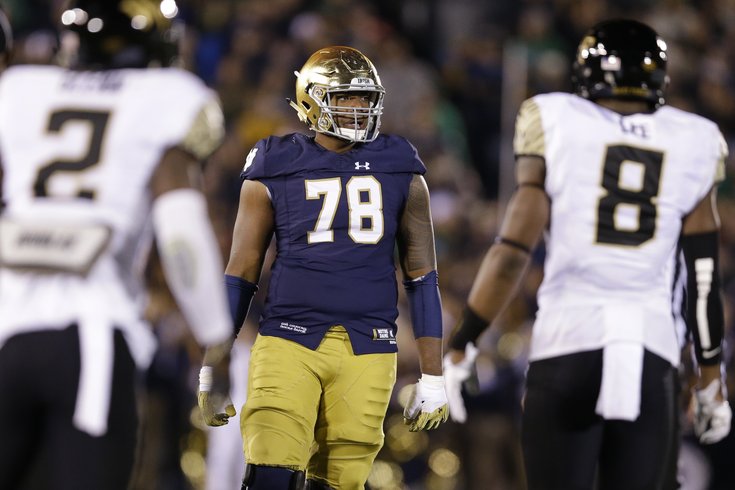 Somehow, on the first day of free agency, Howie Roseman was able to not only able trade the Eagles' way out of a bad contract given to Byron Maxwell a year ago, he was able to move up from 13th overall to 8th overall in the first round of the draft in the process.

Since the season ended a little more than two months ago, Eagles fans have looked at the draft in terms of the Eagles picking at 13th overall. While a move to 8th overall is "only" five spots in the draft order, it opens up a lot of new possibilities in terms of who the Eagles can draft. Let's take a look at a few.

Most draft folks believed that the top two quarterbacks in this draft class -- Cal's Jared Goff and North Dakota State's Carson Wentz -- would be gone by the time the Eagles picked at 13. At pick number eight, there is a far greater chance the Eagles can land one of the top two quarterbacks, if that is the direction they choose, whether they stand pat at eight, or make another modest move up the draft order.

While the Eagles just spent mega-bucks on a pair of quarterbacks in Sam Bradford and Chase Daniel, they still don't have an ideal long-term answer at the position. They are still candidates to draft a quarterback to develop for a year or two, which would put the young buck in the best position possible to succeed.

There are two really strong tackle prospects in this draft -- Ole Miss' Laremy Tunsil and Notre Dame's Ronnie Stanley. Tunsil will be gone by the time the Eagles pick at eight, and may even be the first player off the board. However, there is a decent chance that Stanley will be available at eight.

The need for a pair of good bookends in the NFL is paramount, with many teams now moving their best pass rushers over to the other side of the line to face the RT. For example, guys like J.J. Watt, Von Miller, and Justin Houston all spend most of their time rushing the passer against the RT. The Eagles could just plug Stanley right in at LT, and leave Lane Johnson right where he is at RT.

Peters turned 34 in January and is currently the third-oldest offensive lineman in the NFL. While Peters has had a tremendous career and is a borderline Hall of Fame talent, his career is clearly in decline and he experienced multiple injuries of the "nagging" variety last season. In 2016, he'll count for $9,300,000, of which the Eagles can save $6,300,000 by releasing or trading him.

If the Eagles can trade DeMarco Murray and Byron Maxwell, surely they can trade Peters, who could potentially bring back a Day 3 pick should the Eagles land Stanley.

Like the offensive tackles noted above, there are two really good cornerback prospects in this draft, one of whom is likely not going to make it to pick number eight. They are Florida State's Jalen Ramsey, who should be gone, and Florida's Vernon Hargreaves.

By trading Maxwell (which again, was the right move), the Eagles did open up a hole at CB. While they added a pair of cornerbacks in free agency already in Buffalo's Leodis McKelvin and Ron Brooks, they are probably not long-term answers at the corner spot.

If somehow Ramsey slipped to eight, the Eagles should sprint to the podium. If not, the Eagles could also look at Hargreaves as a very appealing option.

Some are going to like Clemson's Mackensie Alexander more than Hargreaves. I won't put up a big fight there, but I do like Hargreaves' playmaking ability. As a true freshman and sophomore, Hargreaves had 6 interceptions and 24 pass breakups. He made an immediate impact in the SEC in his teens. As a junior last season, even with teams staying away from him, Hargreaves had four more picks, with 152 return yards. In two years as a starter with Clemson, Alexander doesn't have a single pick. If I'm taking a corner in the top quarter of the first round, I want someone who is going to make big plays. That's Hargreaves.

Defenses that can get to the quarterback rule the NFL. Defenses that can't get picked apart with ease. While the Eagles already have plenty of pass rush talent in place, it wouldn't be a complete shock if they went that way anyway at eight.

They could do something crazy...

Like draft a running back at 8. Ohio State's Ezekiel Elliot is a beast with no obvious holes in his game. He will be a Day 1 starter, and is a potential star. However, with running backs having a short shelf life, and with running back not exactly being the hardest position to fill, can you really spend the eighth overall pick on one? I would lean toward no.

And then there's UCLA LB/RB Miles Jack, who is a top five type of talent in this draft. The Eagles are set at LB, but if Jack were to unexpectedly fall to eight, do you say "Screw it," and just take him anyway?

Wait, the Eagles just traded up. Why would they then trade right back? Personally, I wouldn't, as I think that the difference in the player the Eagles can get at eight in this draft drops off considerably to the kind of player they could get where they were back at 13, for example. Obviously, that is part of the trade-off in moving back to collect more picks.