The ink is barely dry on Bradford's new deal, but the new guy in town is also an old friend of the coach 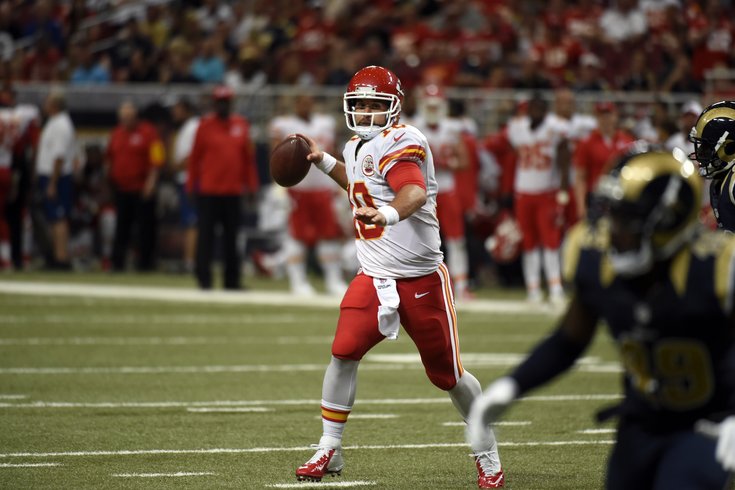 Could former Chiefs backup Chase Daniel wind up as the Eagles starting QB?

In one of several deals orchestrated by GM Howie Roseman and the Philadelphia Eagles on Wednesday, the team signed former Chiefs backup quarterback Chase Daniel, a player who new coach Doug Pederson worked with in Kansas City and has praised on multiple occasions.

One of the first things that jumps out when seeing this news is not just the potential value of the three-year deal -- up to $36 million including incentives, with $12 million guaranteed -- but also it's length. After all, it's a year longer than the contract signed by presumptive starter Sam Bradford a week earlier.

And, apparently, the $22 million the Eagles guaranteed to the former No. 1 pick doesn't come with a guarantee that he'll be the team's starting quarterback.

Schefter on #Eagles QB battle: "Chase Daniel's chances of winning this job should not be diminished or discounted."

Furthermore, Mike Florio of ProFootballTalk.com reported that Daniel will compete with Bradford for the starting job, assuming the former No. 1 overall pick is still around when training camp begins.

Although Bradford’s contract could easily be traded in the short term, since the first signing-bonus installment isn’t due until March 18, a league source tells PFT that the current plan is for Bradford and Daniel to compete for the job. [profootballtalk.com]

But what if we're looking at it wrong? What if Sam Bradford isn't part of the plan at all?

For starters, Florio reported earlier on Wednesday – and alluded to in the story referenced above – that Bradford's deal is structured in a way that would make it very easy for the team to trade him. And with team's like the Broncos, Browns, Jets and others still looking for a passer, perhaps trading Bradford and drafting a QB is actually Roseman's master plan, one that suddenly seems more realistic after the deals to acquire Daniel and move from No. 13 to No. 8 in April's draft.

Daniel, then, would essential fill the same role Pederson did when he entered the 1999 season as the Eagles starter before eventually being replaced by a rookie named Donovan McNabb. And just like they do now, the Eagles had a first-time head coach at the helm -- Andy Reid.

Perhaps this is the final piece to a puzzle that owner Jeffrey Lurie believes can recreate his franchise's greatest period of success – the one that began with Reid and McNabb and led to five NFC Championship games in less than a decade.

Even if that's not the plan, there's apparently no guarantee that Bradford will be the starter.