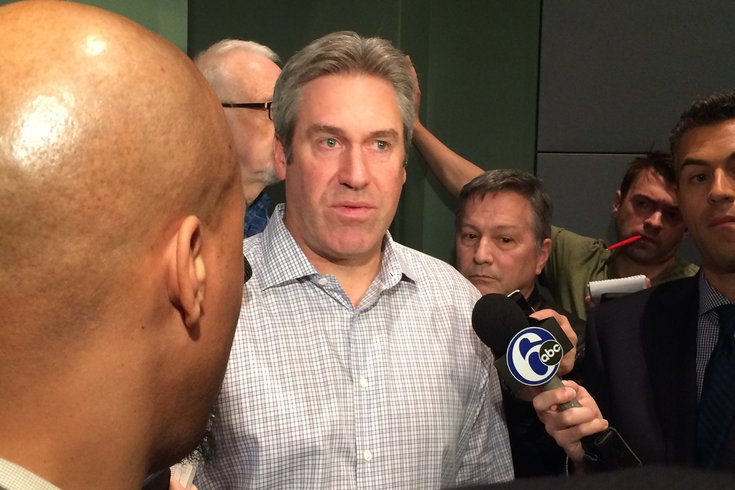 He's more likely than not going to take a quarterback at some point.

What has changed -- if only slightly -- in the two days since the two parties agreed to terms on a two-year, $36 million contract is the why. No longer does the team need to force a pick with one their top pick; if "their guy" isn't there when the Eagles are on the clock at No. 13, they don't need to take a quarterback.

But that doesn't mean Pederson still won't want to take a passer that he can develop in his own system.

"You have to continue to create depth and competition at the position so it's not out of the question. But at the same time, we have to make sure it's the right fit for us."

Now that they have Bradford under contract for the next two seasons, they'll be able to address other needs -- like offensive line or secondary -- in the first round and can wait on taking a quarterback until the third round. [Don't forget, they lost their second-round pick this year to the St. Louis Rams in the deal that brought Bradford to Philly in the first place.]

Whether or not the "right guy" is still available will largely be out of the Eagles' hands; that will depend on what the teams picking ahead of them do. But what this new deal with Bradford gives the team, more than anything, is some breathing room.

What remains to be seen is how the potential drafting of a quarterback impacts Bradford, and whether or not it leads to him looking over his shoulder, worrying that new guy is going to take his job if he hits a rough patch.

"Every year is a new year, you always have to prove yourself," Bradford said. "It doesn't matter if [the deal is] two years, five years or 10 years.''

A few minutes later, Pederson offered his own take on whether or not that would affect his quarterback's psyche.

"That doesn't mean he has to be the Day 1 starter as a rookie. So, again, if you can develop young talent, it just makes you better, especially later in the season when you need those guys."

Bradford clearly recognizes that the short-term nature of his deal already puts him in a position where he's going to need to prove himself whether or not the team drafts a quarterback.

And according to the Heisman winner and former No. 1 overall pick, he's up for that challenge.

"I think my best days are ahead of me," he added.