If anything, it suggests just the opposite... 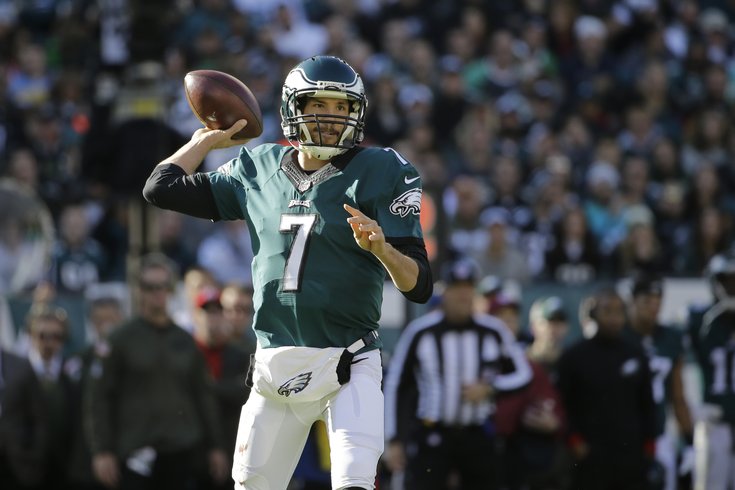 Eagles QB Sam Bradford passes during the first half against the Dolphins.

Just over a week before quarterback Sam Bradford was set to hit free agency as one of the most coveted players on the market, the former Heisman winner and the Philadelphia Eagles agreed to terms on a new deal that will keep Bradford in midnight green for the next two seasons.

But that doesn’t mean general manager Howie Roseman and rookie head coach Doug Pederson have given up on the idea of taking a quarterback in next month’s NFL Draft, perhaps as high as No. 13 overall.

If anything, this deal is an indication that they plan on doing just that.

Pederson hinted at his desire to draft and develop a quarterback last month during an interview with CSN Philly’s Derrick Gunn:

“I think the thing with going to Kansas City is we needed a quarterback. We needed one. So the immediate fix is to find the top available free agent. I think in our situation [now], you may not have to go that route. Therefore, the draft, there’s some good quarterbacks in this draft. I’d love to be able to pick one up, develop him, and eventually he becomes your guy over time. Several ways to skin a cat, but I think in our situation, I think we’ve got a quarterback that’s on our roster right now if he’s our guy that we can win with." [h/t Bleeding Green Nation]

Pederson, as he made clear with the final line of that quote, feels Bradford is good enough to be the guy, at least until something better comes along. And that was reaffirmed by the deal that was announced on Tuesday.

However, given the short-term nature of the deal — it’s still reportedly worth $26 million guaranteed (or at least something close to that) — the team could theoretically still draft a passer in the early rounds, especially if Pederson, a former NFL quarterback and quarterbacks coach, wants to hand-pick and groom the player he thinks could be the team’s future at the position.

After all, Pederson was the Eagles starter back in 1999 when first-year coach Andy Reid used the second-overall pick on Donovan McNabb, who supplanted Pederson as the starter midway through the season.

The situations aren’t identical — Bradford is a much better talent than Pederson was and there’s significantly more money involved — but by limiting the deal to two seasons the Eagles can take their time developing “their guy” and won’t be handcuffed to their current QB if/when he’s ready to start.

Perhaps a better comparison, one with Pederson is also familiar, is the one that took place in Green Bay following the 2004 season. Pederson spent a large chunk of his career backing up future Hall-of-Famer Brett Favre, and although 2004 was his last season with the Packers, Pederson was no doubt paying attention when the team drafted Aaron Rodgers in the first round of the 2005 draft with the intention of having him backup Favre for a few years. That ultimately worked out well for Green Bay, who went on to win the 2011 Super Bowl under the leadership of Rodgers, who won game MVP honors.

If that is indeed the Eagles’ plan, then Bradford’s new deal is exactly what they needed. And it falls exactly in line with their new coach's philosophy, one that was no doubt influenced by his experiences in Philly and Green Bay.

And that guy — at least based on his new contract — is Bradford.

Pederson can now install a new offense and work out some of the kinks before handing over the keys to a rookie quarterback. Roseman and whoever they hire as their new head of player personnel will also be able to shift their focus towards other areas of need, including offensive line to help protect their new QB and avoid a David Carr situation.

All of this, however, assumes that there is a guy out there that Pederson feels could be the answer to what has been a carousel of starting quarterbacks since the team traded away McNabb back in 2010. Furthermore, whoever they draft actually has to deliver in order for this to be a success — and that's often the most unpredictable part of this whole exercise.

The three names garnering the most attention this offseason, including during last week's NFL Scouting Combine, are Carson Wentz, Paxton Lynch and Jared Goff. There are also others, like Penn State's Christian Hackenberg that could be available in later rounds.

But what if they pick the wrong guy? Or if none of them develop into the pro player analysts are expecting them to be?

Well, that's the other genius part of this deal.

By signing him for two years rather than placing the franchise or transition tag on him, Bradford will likely still be under contract — and at a reasonable price — when the team decides whether or not they made the right decision in this upcoming draft.

Last year, Bradford got off to a slow start but finished strong for the Eagles, complicating their offseason plans.

Should Bradford be able to replicate the numbers he put up in the second half of last season, then the Eagles will be able to head into the 2017 season with an option to extend him, trade him, or simply let him walk at the end of the year, a decision that will largely depend on how much it will cost the team to keep him vs. how sold they are on his backup, whomever that winds up being.

If Bradford takes a step back this season in yet another new offensive system, and the team isn't sold on the QB they pick in late April, they'll find themselves in a similar position next offseason. But that will likely mean they finish with a worse record — and a better draft pick — with the chance to try it all over again.

That's the worst-case scenario here. And whenever the worst outcome leaves you in the same place you started from, it ceases being a risk and becomes a no-brainer.