If the Eagles draft Paxton Lynch, don't expect him to play anytime soon 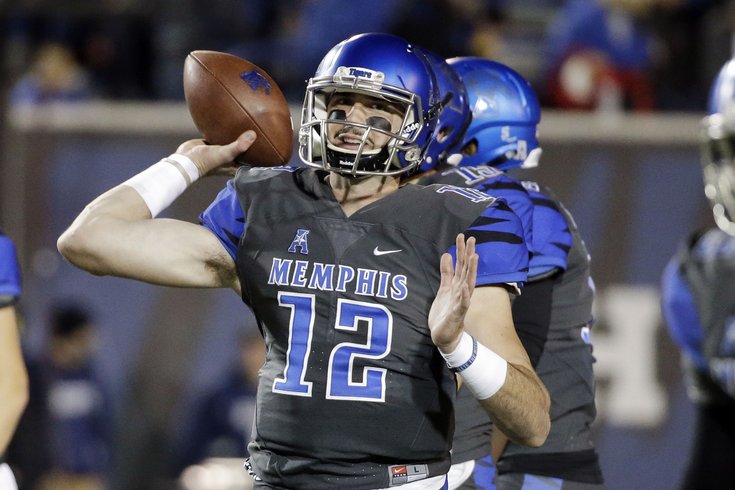 Paxton Lynch has all the physical tools to succeed in the NFL. Does he have the mental ones?

INDIANAPOLIS -- Standing at the podium in front of reporters at the NFL Combine today, Memphis' Paxton Lynch, who most regard as one of the top three quarterbacks in the 2016 draft class, sounded like a guy who did not want to be thrown to the wolves his rookie season.

When asked if he thought he could play right away, Lynch was extraordinarily passive for a player who most project to be taken in the first half of the first round. Emphasis mine:

"I’m not sure what situation I’m going to get put into," said Lynch. "I’ll be happy and honored to go wherever I go. However a team needs to use me, that’s how I’m going to be. I’ve always been a team guy. I’m not about myself. It’s all about giving (other) guys the credit. Whatever I need to do to help that team I will do. If it’s coming in and sitting behind a guy, I’m going to compete and push him. That’s how teams get better, in my opinion. But if it’s a team where I need to start, I’m going to formulate a plan, and stick to that plan and get to work."

The phrase "if it's a team where I need to start" really sticks out. It almost sounds like Lynch would prefer to sit and wait his turn rather than play immediately. That's concerning. On the one hand, a little self-awareness isn't a terrible thing, and the team-first stuff is fine and good. On the other hand, you would prefer a quarterback who exudes confidence and thinks he can play.

Lynch is a very unfinished product. To begin, he ran the Wing-T offense in high school, which means that he didn't throw very often, and when he did, he wasn't exactly running anything close to a pro-style offense. At Memphis, Lynch essentially learned what worked for him and his offense through trial and error.

"I didn’t really throw the ball at all in high school, because we were a Wing-T offense," said Lynch. "But when I got to Memphis, that’s the first time I started throwing the ball in general. We kind of tested a few things out. When I first came in I was just kind of a big, skinny, lanky guy. They didn’t know what I could and couldn’t do. So they just started trying things out, moving me in the pocket and stuff like that."

Obviously, Lynch and Memphis found enough things that worked, as Lynch had a stellar beginning to his senior season, which stalled at its conclusion. On the season, Lynch completed 296 of 443 passes (66.8%) for 3776 yards (8.5 YPA), 28 touchdowns, and just four interceptions.

Physically, Lynch is an impressive specimen who checks off all kinds of boxes in terms of what NFL teams are looking for in a quarterback. He has great size, a strong arm, has shown the ability to throw with touch, and he has good mobility. The downside to possessing those gifts is that they can sometimes be relied upon too heavily, and Lynch knows it.

"I’ve always relied on my athletic ability, with my size and arm strength in college, but I know that’ll be a lot different when I get to the NFL," he said. "Those guys are a lot faster and those windows are a lot smaller, and those defenses do a lot more tricky stuff than they do in college. But I’m working hard, I’m training, and when I finally get to a rookie camp or mini-camp, whenever that is, I’ll know just how different it is. It’s going to take some time to adjust, but I’m ready and I’m excited for it.

"The guys that separate themselves from being an average quarterback and a great quarterback are the guys who get it to click mentally. Peyton Manning and Tom Brady, guys like that, who jump out at you in this era. Those guys are just so smart when it comes to the game. They don’t have to think twice about what they’re going to see on film and then what they see next week."

To begin, Lynch is going to have to call plays in the huddle. He'll also have to get comfortable dropping back from center in a traditional offense.

"Sitting down and talking to these teams, the schemes are obviously going to be a little bit different. I’m going to have to be calling plays from the huddle, but that’s not something I see as a struggle as long as I work on it.

"Basically all of them are under-center teams, but there have been some coaches spitting some facts to me about 61 percent of the snaps were out of the shotgun this year. So I think the game is kind of going that way, but obviously it’s still not fully that way, so I have to get used to those three-step, five-step, and seven-step drops, but that’s all I’ve been doing (in preparation), so I’m very confident in that."

The physical attributes are great, but will they be enough to sell new Eagles head coach Doug Pederson? Speaking on Wednesday about what he looks for in a quarterback, Pederson pointed to intangibles.

Ultimately, it would be ideal for Lynch, or really any quarterback, to be able to ease into a starting job in the NFL. But on some level, you don't want your rookie quarterback being content to sit and learn.

Pederson will have to determine if Lynch can be the guy win Jason Peters' trust.