Quarterback notes from the NFL Combine 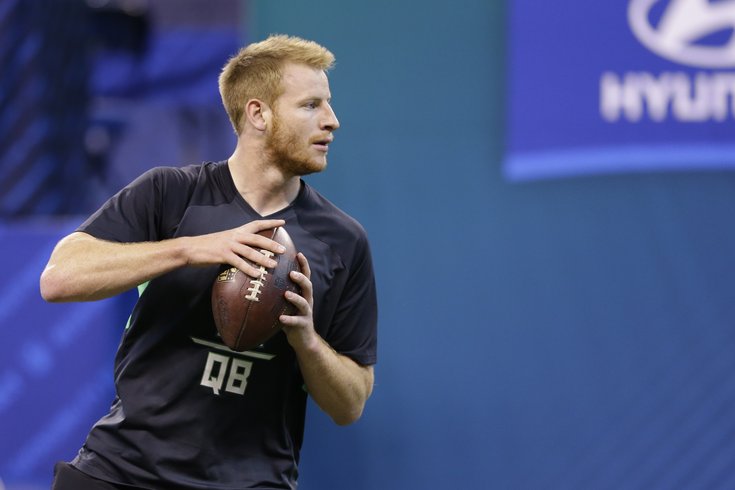 INDIANAPOLIS -- Media covering the NFL Combine are not permitted to watch the actual drills on the field. We are restricted to a concourse area of the stadium which serves as a huge work area for media across the country. The field itself is blocked off by curtains on the other side of a glass partition. Therefore, we essentially see what you can see on TV at home.

However, a handful of reporters were brought into the stands for an hour or two today to watch the second group of quarterbacks (alphabetically from Hogan to Woodrum) work out, myself included. That group would of course include Carson Wentz and Paxton Lynch. Obviously, there is no defense on the field, so there's only so much you can really glean from this type of setting. Still, here's what I saw:

• One of the drills that is never televised in NFL Network's coverage of the Combine is the radar gun test. Quarterbacks "take the snap" at the 5 yard line, do a 3-step drop, and fire a throw as hard as they can at a guy standing about seven yards deep in the end zone holding up a blocking pad. It is seemingly designed to simulate tight window throws, as space is congested in the red zone. The more heat you can put on the ball for window throws down in close, the better. A second personnel guy stands behind the quarterback with a radar gun. Media is not permitted to take photographs, but here's essentially what that drill looks like:

Ourlads.com keeps a log of radar gun throws from past Combines. At some point, the radar gun MPH totals from this Combine are likely to leak, but they are not readily published the same way that 40 yard dash times are.

• During Senior Bowl practices, we noted that Cody Kessler does not have a strong arm.

You can see a noticeable difference in arm strength between Wentz and the other North team quarterbacks, particularly Cody Kessler of USC. You'll see Wentz drill one in to a receiver, and then on the next rep, you're almost willing the ball to get there faster from Kessler. It's reminiscent of watching Matt Barkley following Michael Vick in training camp reps, although maybe not to that extreme.

One drill they ran at the Combine was a 20-yard dig route. Quarterbacks took five step drops, and then let it rip. That drill exposed the quarterbacks who are unable to push the ball down the field with top end velocity. Again, Kessler did not shine there. However, the quarterback who really threw with underwhelming velocity was Stanford's Kevin Hogan. Unsurprisingly, this was a drill where Wentz and Lynch could show off their impressive arm strength.

• Another area where both Wentz and Lynch impressed were on deep throws. On deep sideline throws, Wentz put two consecutive throws on the money to receivers streaking down the sidelines. As importantly, Wentz did not have to rely on a higher trajectory to get it there. His throws down the sideline had more zip on them (while still maintaining a downward "drop in the bucket" trajectory), thus making it tougher for a safety to get over in time to potentially break up the play. Lynch, meanwhile, showed the ability to put touch and accuracy on deep corner routes, putting the ball up against the sideline where only his guy or nobody at all could make the play.

• Cardale Jones did not throw because he pulled a hamstring while running the 40.

• No quarterbacks ran blazing 40 times. The best of the bunch was Louisiana Tech's Jeff Driskel who transferred from Florida, became an afterthought, and then had a strong senior senior to close out his college career. He ran a 4.56. The next best time was Wentz, who ran a 4.77, a very respectable time.

• Some were unpleasantly surprised by Lynch's time, as he ran a 4.86. In fact, he ran the fourth slowest 40 among the 17 quarterbacks competing. That's not a big concern (to me, anyway), and his 4.86 was about what I expected. We covered Lynch's speed when we profiled him back in November:

The rep on Lynch is that he's some kind of dual-threat quarterback, or at least that's the perception I had of him before I sat down and really watched him. I'd be shocked if he ran something better than a 4.8 40 at the Combine. He is mobile enough to escape the pocket and make throws on the run at the next level, and he'll keep defenses honest if he's running zone read plays, but he's not going to be gobbling up chunks of yardage when a play breaks down.

• Carson Wentz is impressive. More so than any quarterback here at the Combine or at the Senior Bowl in Mobile a month ago, his game just feels effortless. He looks the part, and in my opinion is the top quarterback in this class.