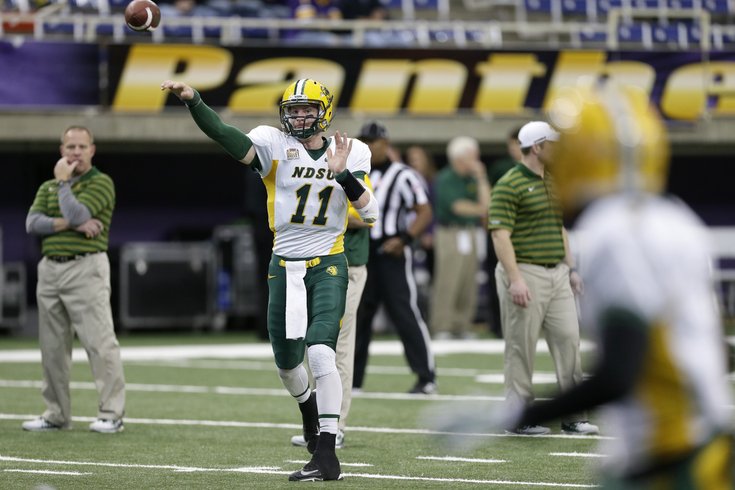 Of the top three quarterback prospects, Carson Wentz has the best arm strength.

As the offseason drags along and we all wonder what is to become of Sam Bradford's future with the Eagles, the obvious question if Howie Roseman and the gang decides to part ways will be, "Who's gonna replace him?"

If the Eagles were to move on from Bradford, they would instantly become prime candidates to draft a quarterback in the first round. And even if they kept Bradford, it might not be the worst idea anyway.

Watching Carson Wentz throw in person at the Senior Bowl, I came away very impressed not only with his arm strength, but the ease with which he makes throws that require velocity. It just looked effortless to him. It was fun watching Wentz rip a sideline throw with zip, and then the next quarterback up throwing lollipops by comparison.

Wentz's arm shows up in games. I found similar sideline throws by Wentz, Lynch and Goff, that serve as good examples of the kind of arm strength each quarterback has. On the eye test alone, you can see that Wentz's sideline throw clearly gets there with more velocity than Goff's or Lynch's. It's not close.

If you're not a fan of the eye test, I put a stopwatch on those throws. I had 0.98 seconds for Wentz, 1.28 seconds for Goff, and 1.31 seconds for Lynch. Goff's throw traveled the shortest distance, and he had a chance to step into it. His arm strength should be a serious question mark for anyone picking in the top 15. Lynch's throw, meanwhile, traveled the longest distance, and he did not really step into it. It's mostly arm, which is a theme with him. Whatever team drafts Lynch is going to have to coach up his footwork to get the most out of his throws. He is overly reliant on his arm, and often doesn't get as much velocity on his throws as he should by using his lower body.

To be clear, I'm not basing my arm strength assessments on just those three throws. They are merely representative of their larger bodies of work.

Here's another comparison between Lynch and Goff on a deep ball. Look at Goff really step into this throw that travels somewhere in between 55-60 yards in the air, on the money. That is about where Goff will max out. Meanwhile, Lynch throws the ball off his back foot on a line 50 yards down the field. Sick throw.

Goff has to have a pristine pocket to make the throw that he did, which won't be often seeing as those types of deep routes develop more slowly. That kind of throw will likely be few and far between in the NFL, unless Goff has the luxury of playing behind a great pass-protecting offensive line. If you'll also notice, his ball wobbles. That is not a rare occurrence for Goff.

Conversely, with his height and arm strength, Lynch does not require a sizable area to step into to make deep throws.

Tale of the tape -- Arm strength:

To note, Goff is way behind here. Wentz and Lynch have very good arms, while Goff does not.

*We cut the above videos cut from DraftBreakdown.com.