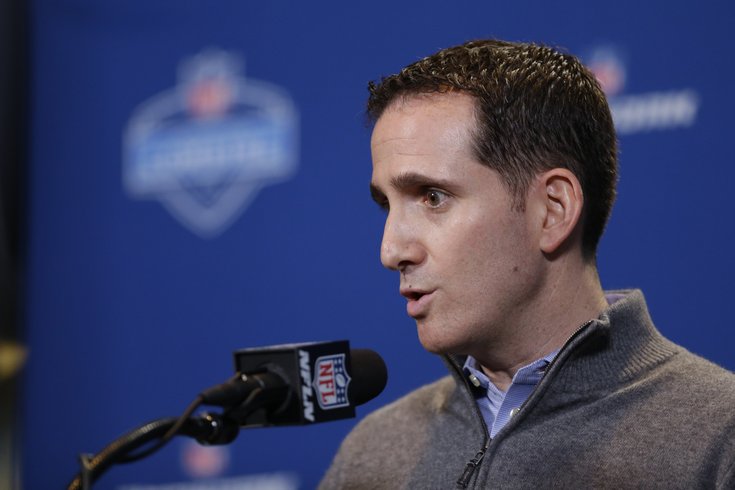 With Sam Bradford's contract, the Eagles get to stay competitive in the short term while developing for the long term, but they're paying high rent to do so.

Now that we know that Sam Bradford will be the Eagles' starting quarterback in 2016, let's take a look at the cost to retain him. The basics are that it's a two-year deal worth $36 million, $22 million of which is fully guaranteed, with $4 million guaranteed for injury.

Here's Bradford's contract in a snapshot, via overthecap.com:

So what does the above chart mean?

• Bradford's salary cap number in 2016 is $12,500,000, which is actually down from his total of $12,985,000 a year ago. In the short term, Bradford's seemingly modest figure (at least in terms of what many thought he'd make, not necessarily what he's actually worth) will allow the Eagles to spend in free agency if there are players that interest them. The Eagles' salary cap in 2016 is now estimated at $18.6 million, which gives them flexibility.

• Bradford's $18 million per year average cap number ranks 14th in the NFL among quarterbacks, according to overthecap.com. While Bradford has never been anything close to the 14th best quarterback in the NFL throughout his career, the Eagles were likely to achieve a shorter, less risky deal long-term by paying him a figure higher then many of his more successful peers. That's the trade-off for being able to escape his contract with moderate pain after one year, and no pain after two.

In summary, Bradford's $18 million per year average is more than what he has shown he is worth over his seven-year NFL career. However, he allows the Eagles to maintain continuity for at least one more season in Doug Pederson's first year as the Eagles' head coach. The shorter duration of the deal indicates that the Eagles are not sold on Bradford as a long term answer at quarterback, and they are a near certainty to add to their quarterback pipeline in the draft.

Assuming he stays healthy, Bradford's presence will keep the Eagles competitive in an awful NFC East in 2016 and will allow them to develop a young quarterback or two in the background. For the right to sort of "have their cake and eat it too," the Eagles are paying a high rental fee.