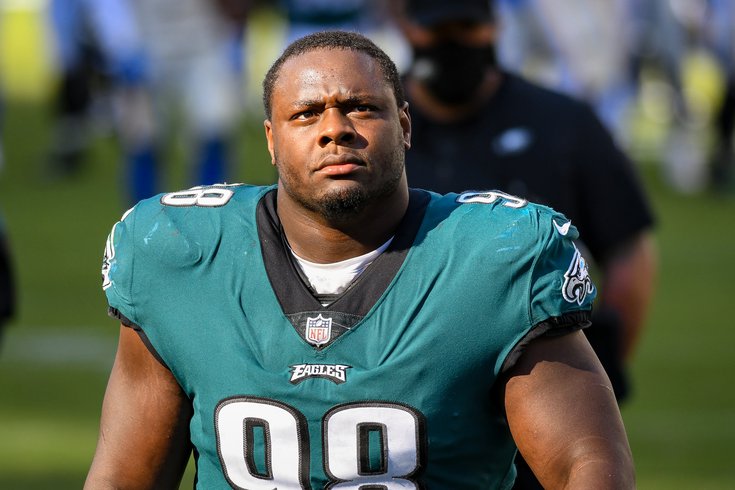 Hassan Ridgeway after the Philadelphia Eagles game against the L.A. Rams at Lincoln Financial Field.

The Philadelphia Eagles announced on Thursday that they have re-signed DT Hassan Ridgeway (Mike Kaye of NJ.com first to report). The length of the deal is unknown, but it's likely a one-year contract.

The Eagles initially acquired Ridgeway from the Colts for a seventh-round pick during the 2019 NFL Draft. Ridgeway previously played under defensive coordinator Jonathan Gannon for one year in Indy in 2018.

Ridgeway has been a decent rotational defensive tackle when he has played, but he has missed 29 games the last three years, including 18 with the Eagles over the last two.

In 14 games with the Eagles, Ridgeway has 19 tackles (6 for loss), 3 sacks, and 5 QB hits. It's likely Ridgeway attracted little more than a veteran minimum deal, which is fine on the surface, however, the risk in signing him is that if he makes the roster and the team is relying on him to produce in a rotational role, they will have to replace him with a guy off the street if he gets hurt again mid-season.

MORE: Report: Eagles to sign S Andrew Adams | Live free agency updates: Slow-moving WR market could benefit Eagles | McMullen: Are Roseman, Eagles getting their reputation back? | Eagles finally give their side of the story on Carson Wentz trade