John McMullen: Are Roseman, Eagles getting their reputation back? 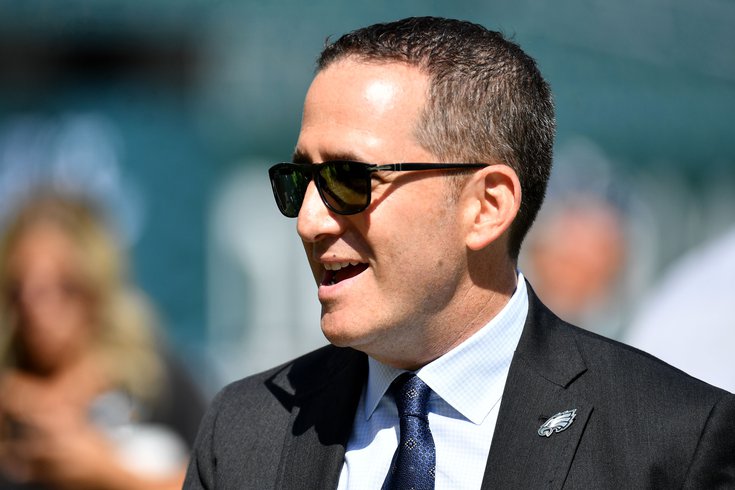 It took a while but we are finally at the "... and the Eagles" portion of the program.

It's a bit of an inside joke around NFL circles that every league rumor finishes with "... and the Eagles," a nod toward Howie Roseman's aggressive nature when it comes to personnel issues.

For the most part, there is some truth to the sentiment because the Philadelphia general manager is fond of keeping all avenues open and making phone calls to keep abreast on just about all league matters.

The thought behind that is you never really know when the price is going to come down for [insert name].

As the salary-cap issues grew for the Eagles in an attempt to keep the championship window open after Super Bowl LII, the organization started taking on a more tempered approach, however.

On talk radio and with the fans, though, the assumption that the organization would be pedal to the metal at all times with every big name available was always in play and the name Eagles was almost universally dropped by the clout-chasers just in case Philadelphia pulled the trigger on the DeAndre Hopkins or Stefon Diggs of the world.

Add in the Jeffrey Lurie-coined transition phase and Philadelphia kept relatively quiet during "legal tampering," the oxymoron which is really just a two-day negotiating period in advance of free agency that the Eagles are typically players in.

Enter Jason La Canfora, the long-time CBS insider, who threw out the name Deshaun Watson in connection with the Eagles on Wednesday despite the fact the team has little money and is in that "transition phase," according to the same owner who directed his scouting department to build around Jalen Hurts, per Chris Mortensen.

From last night - keep an eye on the Eagles in the Deshaun Watson derby, what is shaping up with the top three in the draft, other trades being discusssed and much, much more: https://t.co/4ausJSz3No

The gist of the rumor seems to emanate from the reputations of Roseman with one league GM, likely more focused on his own budgeting, defaulting to Roseman's reputation: "Would Howie trading for Watson surprise me? No. Now that you mention it."

If you're paying attention, you can glean two things from that little quip.

The first is that La Canfora presented the thought to the GM evidenced by "Now that you mention it" and that’s followed by the throwaway caveat of nothing Roseman would do surprises, again a default to the old standard when the GM had more to work with other than the clearance aisle and a 4-11-1 roster.

The dots, however, continued to assemble when John McClain, the veteran Texans reporter, reached the point of believing Watson will ultimately be moved due to the QB's issues with the Texans organization.

The Texans haven’t said they’re not trading Watson since January. I expect him to be traded.

From there, the two teams most speculated upon as Watson destinations have been the New York Jets and Miami Dolphins because they have everything needed to acquire a superstar player — most notably the draft capital and the money. Former league executive Mike Lombardi, however, noted that Denver and San Francisco — two teams who would like to upgrade their QB situations — would actually be Waston's preferences.

Uncertainty is the fertile ground of the mystery team.

Connecting all those dots to the Eagles remains the biggest problem but if it hits Katy bar the door.

The Eagles do "fit" as a trade partner for the Texans because they have the sixth overall pick in 2021, Hurts is a Houston-area native who would enjoy going back and at least intrigue the locals, and Philadelphia will likely have two first-round picks in the 2022 draft to offer Houston.

Finally, if history teaches us anything, the NFL salary cap itself is the most malleable thing on planet earth.

"This has been the most docile start to the league year in recent Eagles history, devoid of action outside of the Wentz salary dump," he wrote. "Then again, this franchise also finds itself with the sixth overall pick — they very rarely ever pick this high — and with unproven Jalen Hurts atop the quarterback depth chart and likely very much on the outside of having one of the top two or three quarterbacks fall to them in the draft. Why move up for a far-less-than-sure thing, when you could package that draft capital for Watson, instead?"

In 2016 Roseman himself noted that when you are that high in the draft you need to take advantage of it. Meanwhile, the GM is all of a sudden talking about QB at No. 6 again despite Mortensen's recent report.

Via Eagles.com, Roseman said the team "won't put a cap on what we're going to do at that position."

South Philadelphia's state-run media also paraphrased Roseman as saying that the team will consider every option as it addresses depth and competition at quarterback, claiming the Eagles will be performing their due diligence at every position on the roster.

The odds remain long, but if you throw the dart there’s at least a chance it hits the bullseye.