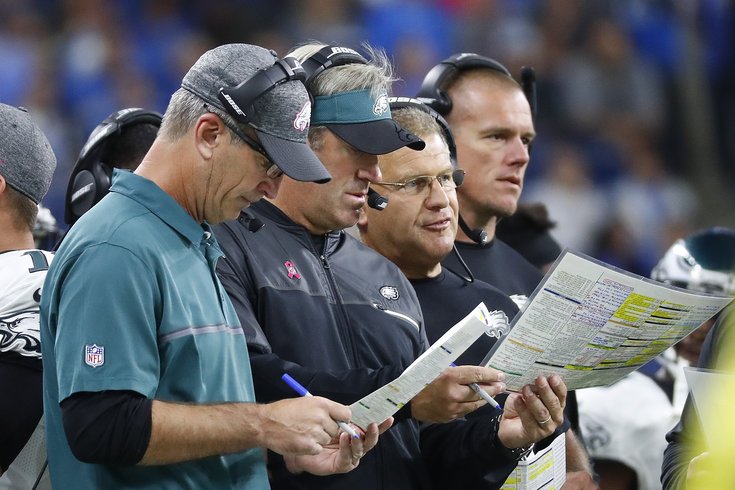 Eagles offensive coaches review my grades, unanimously agree that they're all undeniably correct.

The Philadelphia Eagles are a quarter of the way through their first season under Doug Pederson, and are off to a surprising 3-1 start. Now feels like a good time to grade the Eagles' first quarter performances, individually.

Is there really any question here? Wentz has it all -- great size, a strong arm, athletic ability, accuracy, poise, smarts, improvisational skills, leadership qualities, and competitiveness.

In fact, according to Reuben Frank of CSN Philly, Wentz has the highest quarterback rating in NFL history for rookie quarterbacks in their first four games:

The Eagles have found their franchise quarterback.

MORE ON THE EAGLES: Redskins could be without best offensive weapon Sunday vs. Eagles | Carson Wentz leaves a big tip for a fan at his alma mater | DeSean Jackson open to return to the Eagles in free agency | Week 6 NFL picks | Eagles power ranking roundup: Birds tumble | Film breakdown: Did Wentz make the right throw on game-ending interception vs. Lions?

Mathews had a few nice runs against the Bears on Monday Night Football, particularly on the play where he ran into the line, bounced off, kept his balance, and ran in for a score. Otherwise, he's been the least productive of the Eagles' backs, and his fumble against the Lions was an absolutely devastating, inexcusable mistake.

Sproles had a big game against the Steelers, hauling in six passes for 128 yards and a TD, and he was effective running the ball against the Lions in limited chances. Otherwise, he's been relatively quiet in the regular offense, although he also had a 40-yard punt return against the Browns.

In limited action so far this season, Smallwood has 20 rushes for 96 yards and a TD. Against the Steelers, Smallwood showed very good burst, running for 79 yards on 17 carries, even when the Steelers mostly knew the Eagles were running it. He needs more opportunities.

During training camp, especially early in camp, I personally didn't think Barner could play and thought his past was too inconsistent. To my surprise, Barner has looked good, running for 86 yards and a TD on 14 carries this season.

Drops still persist, but Matthews is still very clearly the Eagles' best weapon in the passing game. On the season, Matthews has 19 catches for 269 yards and 2 TDs. That puts him on pace for 76-1076-8, or right around where he was a year ago.

Agholor is certainly a lot better than he was a year ago, which isn't exactly a high bar. So far this season, Agholor has 13 catches for 147 yards and 1 TD. While Wentz was certainly more to blame for the fourth quarter interception against the Lions, Agholor didn't exactly do much to ensure that that pass wasn't picked off. Agholor is on pace for 588 yards, which just isn't good enough for a second-year, first-round wide receiver who is getting a lot of snaps.

There have been glimpses of what Green-Beckham can do, and clearly, the trade to bring him in for the low low price of one Dennis Kelly was robbery. Still, Green-Beckham's first quarter of the season performance was very inconsistent. He dropped a deep ball against the Steelers that should have been a touchdown:

And while he was possibly interfered with on this fade route in the end zone against Detroit, this is a 5'9, 190-pound corner covering him:

Green-Beckham has nine inches and like 50 pounds on this guy. How about just out-muscling him and making the play?

Huff has 8 catches for 24 yards and 3 rushes for 10 yards. That's 11 touches for 34 yards (3.1 yards per touch), and he has not looked good on kick returns, muffing one last Sunday in Detroit.

In two games, Ertz has 9 catches for 95 yards, which is fine. However, on two consecutive plays against the Lions, Ertz caught a pass and went down on his own, Jeremy Maclin-style. Whenever Brent Celek gets his hands on the football, he looks to punish opposing defensive backs. You just don't see that often enough from Ertz.

Celek has four catches this season, putting him on pace for 16 on the season, which would be the lowest of his career, although that is no longer his role in the Eagles' offense. Celek remains the best blocking tight end on the team, by far, and his value will increase with Lane Johnson now serving his 10-game suspension.

Burton still isn't playing as much as he should, but when he has gotten opportunities, he has been good. Against the Bears, Burton had five catches for 49 yards and a TD.

Peters is no longer the star he once was, but he has given Carson Wentz good protection on the blind side, as Wentz has mostly had clean pockets to throw from all season. In the run game, Peters can still do things like this:

Before the season began, I wondered why the Eagles seemingly just handed the LG spot to Allen Barbre. Welp, that article looks dumb now. Barbre has been one of the major pleasant surprises of the first four games, playing high-quality football to the point where the Eagles don't want to move him and risk messing up what they have on the left side of their offensive line.

I already know a lot of you will vehemently disagree with this grade, and I get it. Kelce struggled quite a bit in the first two games against the Browns and Bears when he had to face much bigger NTs like Danny Shelton and Eddie Goldman. However, Kelce does an outstanding job of making line calls and adjustments, which has helped Wentz have the start that he has had.

Brooks has been fine. He hasn't gotten the consistent push you might hope for in the run game. However, there haven't been any egregious errors on his part either. Overall, he has been a huge upgrade at RG.

Lane Johnson: A- (with an F for the next two quarters)

Lane Johnson is playing the best football of his career. Unfortunately, he was suspended for 10 games for his second offense for violating the NFL's policy on performance-enhancing drugs.