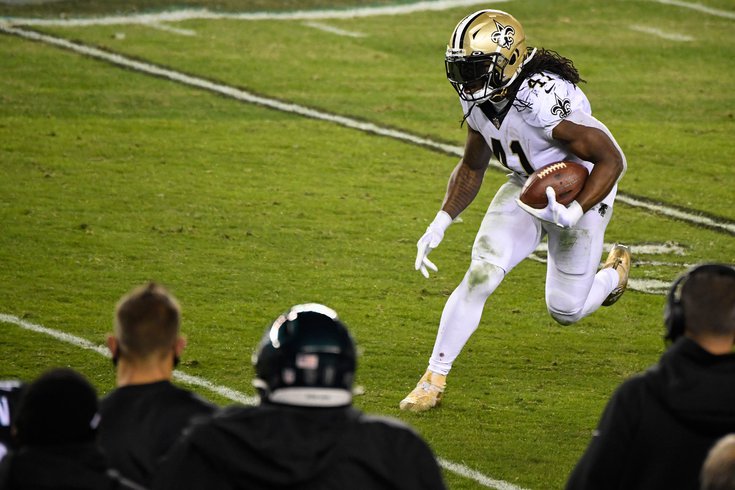 The Saints could be without star running back Alvin Kamara.

The Philadelphia Eagles are a relatively healthy team 10 weeks into the 2021 season, while the New Orleans Saints have a long list of injuries to a large number of their most important players.

Here is the Eagles-Saints injury report, with analysis. We'll update as the week progresses.

• Wednesday: Goedert's injury is the most important one to watch as the week progresses, and Taylor's projected DNP is worth monitoring as well.

• Thursday: Goedert being a limited participant is a good sign for the likelihood that he'll pass the concussion protocol in time for the game on Sunday. Additionally, Taylor being upgraded to limited, and the rest of the limited guys on Wednesday being full participants on Thursday is good for the Birds. #Analysis.

• Friday: Derek Barnett was a late-week addition to the injury report, and honestly, the Eagles could probably use a break from his untimely penalties. Taylor's full practice is a good sign he's good to go. Also, the bet here is that Miles Sanders will be activated from IR on Saturday.

• RG Brandon Brooks (IR): Brooks suffered a pectoral injury against the 49ers. It's "only" a pec strain, as opposed to a tear, so while he'll likely miss time (about 8 weeks, per Lane Johnson) on injured reserve, it's not a season-ending injury. Brooks got hurt Week 2, so Week 10 was 8 weeks. Nick Sirianni has been asked multiple times about Brooks' possible return, but no useful information has been given.

• QB Jameis Winston: Winston's season is over with a torn ACL. While not an ideal starter, Winston still gave the Saints a better chance of winning games than backup Trevor Siemian.

• WR Michael Thomas: In his first four seasons, Thomas had 470 catches for 5512 yards and 32 TDs. He had an injury-marred fifth season in 2020, which has carried over into 2021. Thomas was expected to return this year, but a setback to his recovery from offseason ankle surgery ended his season.

• DB Chauncey Gardner-Johnson: Versatile pest of a player who went on IR earlier this week.

• K Wil Lutz: Career 86.6 percent kicker who has not yet played this season. In Lutz absence, the Saints have had three different kickers this season — Aldrick Rosas, Cody Parkey, Brian Johnson — and they just signed a fourth in Brett Maher.