Eagles seem to be realistic about what they are in 2016 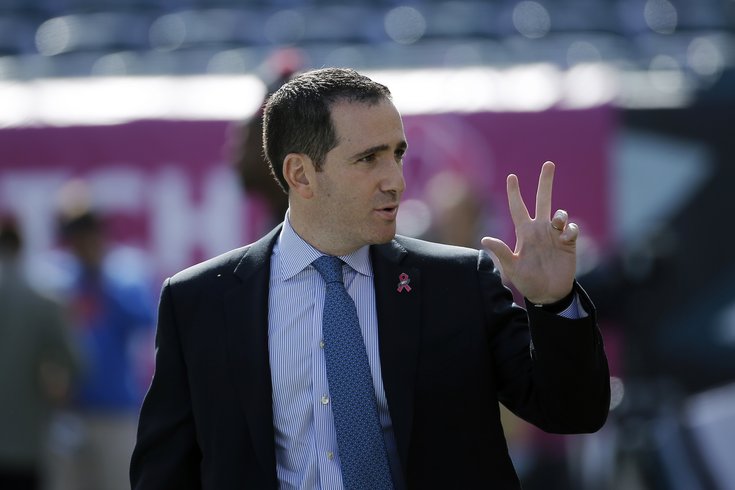 How many years until the Eagles are legit contenders again, Howie?

A week ago, we offered up 10 reasons the Philadelphia Eagles will be a "dumpster fire" in 2016. We did the same for the rest of the NFC East, when we picked apart the flaws of the Dallas Cowboys, New York Giants and Washington Redskins as well.

It was meant to be a fun series (if you're into sadomasochism), while at the same time showing that the NFC East as a whole is not at all very good. Taking a 60,000-foot view of the NFL's eight divisions, the NFC East was very clearly the second worst division in the league in 2015.

As you can see in the chart above, only two divisions finished with a combined negative point differential. The NFC East and AFC South served as little more than punching bags for the rest of the NFL. The NFC East, for example, was 14-27 (.341) against non-divisional opponents.

The Houston Texans won the AFC South, the only division worse than the NFC East. Like the NFC East champion Redskins, the Texans were an easy out in the first round of the playoffs. The Texans were embarrassed at home, getting shut out by the Chiefs 30-0, while the Packers easily dispatched of the Redskins after a slow start, 35-18.

In a weak division, there might be a temptation to "go for it" and construct an offseason in which the priority is to "win now." That does not appear to be the approach the Eagles are taking.

When asked point blank on WIP's Morning Show with Angelo Cataldi on Monday if he thought the Eagles' roster right now is a "playoff team," Howie Roseman offered very little in the way of short-term optimism. Rather, his focus was on building a consistent winner over the long haul.

"I don’t know," said Roseman. "I think we have to get into training camp. We have to get into the season. Injuries play a huge role in what we’re doing. I think this is going to be an extremely competitive camp. I think we have some talented pieces, but I can’t tell you that I’ve sat here and evaluated and gone through the schedule and gone, ‘We’re gonna win this game, we’re gonna lose this game.’ When you’re in the offseason, you’re in building mode, and right now that’s what we’ve been in, is building and trying to get some building blocks in place so that we can have a team going forward that’s competing every year."

Certainly, when presented with a question like that, most coaches and executives will be careful with their words, but Roseman clearly prioritized the future over the present.

And he's right. In our "Eagles dumpster fire" piece, we enumerated many of the concerns with the present roster, including quarterback, running back, wide receiver, the offensive line, cornerback, and just general overall depth.

Roseman's words back up the Eagles' actions this offseason. A lot has been made of the Eagles spending $280 million in guaranteed money this offseason, which is almost double the next closest team in the NFL. That approach might be confused with a "win-now" immediate gratification "Dream Team" type of approach.

However, the bulk of it was spent on young, ascending players. The Eagles spent at least $10 million in guaranteed money on 10 players this offseason, listed below with their respective ages, in ascending order:

Of the 10, only one player does not have a clear projected long-term role on the team. That would, of course, be starting quarterback Sam Bradford, who is merely a competent placeholder keeping the seat warm until rookie Carson Wentz is ready to play. Then again, if Bradford plays reasonably well enough in 2016, the Eagles should be able to flip him for a draft pick who can help out down the line.

Obviously, the Eagles' long-term success will depend heavily on the progression of Wentz. There are no guarantees that he will be the franchise quarterback they hope he will be, although there is certainly reason for optimism.

The Eagles should absolutely try to go out and win this crappy division in 2016 with the players they have, but Roseman is right to not let a crappy division cloud his judgment in trying to build a consistent winner.