The Eagles want you to wear ski masks 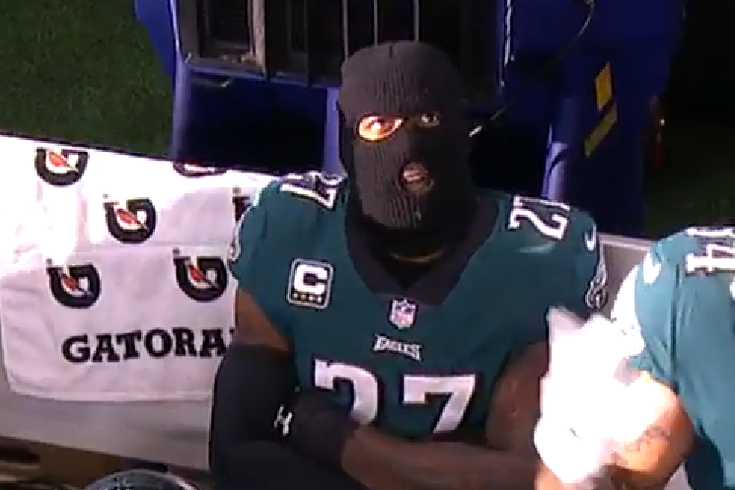 What can go wrong if 65,000 Eagles fans are all wearing ski masks at Lincoln Financial Field next Sunday?

During the Philadelphia Eagles' loss to the Dallas Cowboys last Sunday, while the officials were trying sort out the opening kickoff fumble caused by safety Malcolm Jenkins (that they eventually botched in grand fashion), there was an odd image shown on the live telecast.

That was Jenkins sitting on the sidelines, as shown above, wearing a ski mask, despite the game being played indoors at a room temperature setting.

Huh? What's that all about? Well, the ski mask appears to be the 2018 team's new symbol of motivation, as Rodney McLeod led a defensive huddle with a ski mask as the centerpiece of his speech against the Los Angeles Rams Sunday night.

“That’s something we started two weeks ago,” McLeod said. “It’s kind of been motivating the guys. It’s just a mentality we’ve been having. When we go out there, we put the mask on. We’re out there for business, and to take what’s ours.”

“If that means getting wins, if that means taking the ball, making plays, anytime someone makes a turnover they put the mask on.

“We say it’s robbing season. It’s thievery. Hopefully the fans come out next week and wear the masks with us in the stands. That’d be cool. It’s just something to motivate us as a defense, and the entire team. Guys are kind of rallying behind it, and you see us making plays these last two weeks, so it’s working.”

The Eagles did force three turnovers in each of the last two weeks against the Rams and Cowboys, so maybe McLeod is right that the ski mask is the answer.

Last year, of course, Eagles players donned dog masks after the team's divisional round playoff win over the Atlanta Falcons, a game in which they were home underdogs. Lane Johnson said his buddy ordered the masks for him on Amazon, and soon after, Earth's supply of dog masks ran out as Eagles fans quickly bought out the globe's stock.

For quick reference, you can buy ski masks for around $8. Please behave though, OK?