Here's where you can buy your official Eagles underdog mask

In case you live in a cave without TV or internet, the No. 1 seed Philadelphia Eagles came into their divisional round matchup as 2.5-point underdogs to the No. 6 seed Atlanta Falcons.

As such, Eagles' players answered questions about it all week, and probably got a little tired of it, especially considering they went 13-3, grabbing a share of the best record in the NFL this season.

After the Eagles secured the win, Lane Johnson and Chris Long put on dog masks, mocking the idea that the Eagles were underdogs. Johnson said that the masks were being held by Jason Peters all game in his coat pocket.

Johnson said his buddy ordered the mask for him on Amazon. So, I looked it up, and sure enough, here it is for the very reasonable price of $12.98. 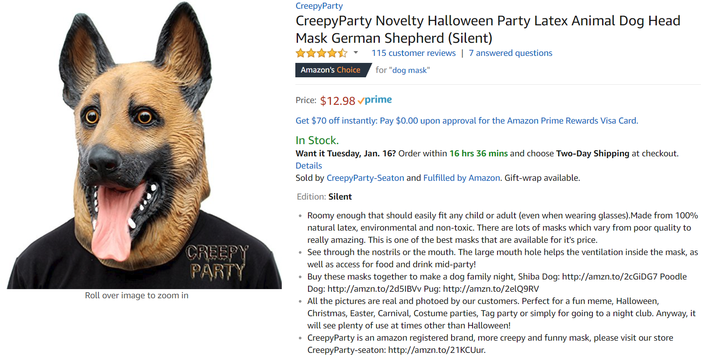 The Eagles' next opponent will be the winner of the Minnesota Vikings - New Orleans Saints game on Sunday afternoon. And guess what? The Eagles will probably be underdogs again. The folks at "CreepyParty" are probably going to have no idea why so many people from Philly are buying dogs masks.