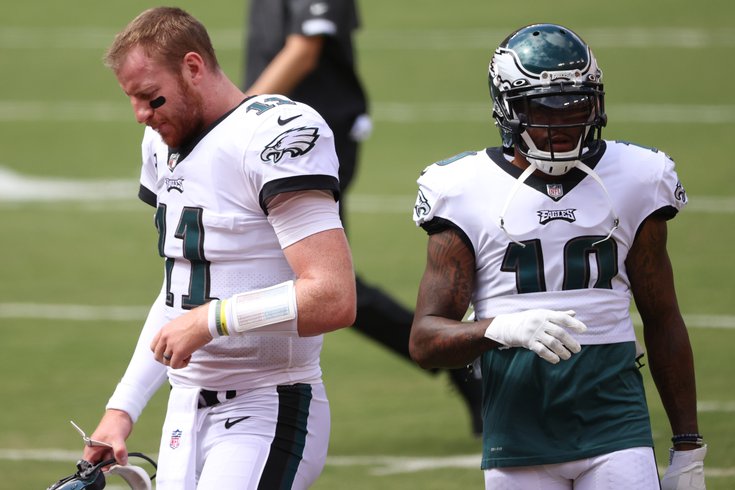 DeSean Jackson says he wasn't injured against the Football Team on Sunday.

In their Week 1 loss in Maryland to the Washington Football Team, the Birds played 68 snaps on offense, and 70 on defense. There's a lot to evaluate here, especially on Week 1, so let's get right to it.

Analysis: Wentz took an absolute beating for four quarters, and he's still breathing. So there's that, I guess?

We'll take a deep look at what went wrong along the offensive line at some point this week, so we'll save most of the analysis for then, but obviously, that was as bad an offensive line performance as we've seen in a long time in Philadelphia.

In case you're living in a cave, the Eagles were without Andre Dillard, Brandon Brooks, and Lane Johnson on Sunday. Also not noted above is Matt Pryor, who seems to have fallen completely out of favor. A couple weeks ago, with Peters reportedly refusing to move to LT in place of Dillard without a bump in pay, Pryor was the team's next choice. Now he's behind Driscoll, Herbig, and Mailata in the pecking order.

Analysis: The running backs were wholly ineffective. Miles Sanders' absence exposed the Eagles' backs' inability to make something happen between the tackles, and I believe they will continue to look to add a bigger back who can get those tough yards.

Analysis: Throughout the game, I got dozens of questions asking what was wrong with Jackson, who was in and out of the game, and out for entire drives. Apparently, he's fine, and was seemingly just on a pitch count.

For the record I wasn’t hurt or didn’t get hurt. I’m good.

My sense is that after a loss, that'll bother some, while some of those same folks might deem it a good idea had the team won. I think it's fine to try to preserve him so that he has a better chance of playing a full season.

On Sunday, the wide receiver targets were distributed like so:

Doug Pederson seemed to want to get Reagor and Hightower involved early, which makes sense. Reagor was up to the challenge. Hightower seemed to have some first-game jitters.

To my surprise, Wentz did not target Arcega-Whiteside once. I'll be curious to see on the re-watch if he wasn't getting open, or if Wentz just wasn't going to him.

Analysis: One of the rare silver linings of the day was Goedert's performance, as he had 8 catches for 101 yards, and a TD. Ertz's late-game drop effectively sealed the loss for the Eagles.

Analysis: Graham left the game and was evaluated for a head injury, hence his lower than usual snap total, while Curry left with a hamstring injury. With Graham, Curry, and Derek Barnett out, Sweat and Avery had bigger roles.

The Eagles got very little production from Cox, Jackson, and the injured Javon Hargrave, who make up the highest-paid DT trio in the league.

Analysis: Football Team TE Logan Thomas got wide open for a TD on a coverage bust in the red zone. I'll be curious to see if that was on a linebacker or a safety. Otherwise, the linebackers, which were a big concern for some heading into this season, were pretty far down the list on things to blame for the loss.

Analysis: With Will Parks out, the Eagles basically abandoned their big nickel look. As such, what exactly was the point of keeping Epps on the roster?

On the bright side, Slay had good first game with the Eagles, as he had good coverage all day. He did miss a couple of tackles, but at least his effort as a tackler seemed fine.