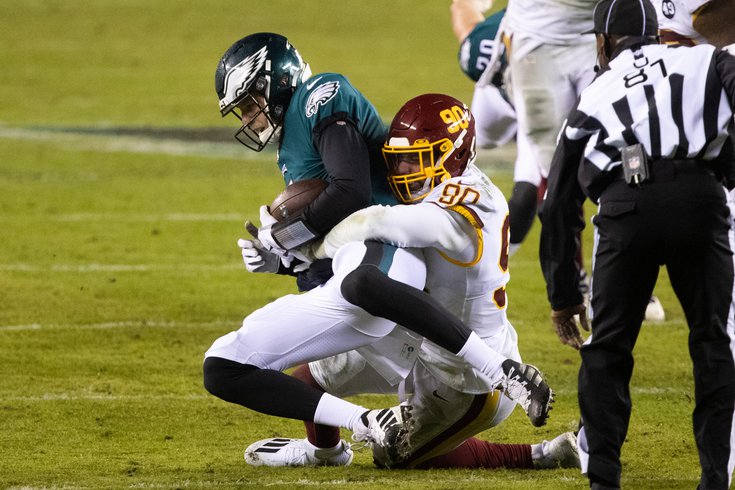 In their Week 17 loss to the Washington Football Team, the Philadelphia Eagles played 68 snaps on offense, and 63 snaps on defense. For the sake of posterity, and because it was such a weird game (and perhaps also to satisfy my OCD tendencies), here are the snap counts.

Analysis: Sudfeld's 18 snaps were on four drives. They went as follows:

In total, 11 different offensive linemen started games for the Eagles this season.

For the Prince Tega Wanogho fans, he played two snaps on special teams.

Analysis: The Eagles rightfully held Miles Sanders out. No sense putting any unnecessary mileage on him in a meaningless game.

Analysis: Arcega-Whiteside led the team with 40 yards on 2 catches. I actually thought he played OK as a receiver and as a blocker. While I think he'll be on the roster next season, you obviously can't count on him for anything, but it was good to see him do something.

Reagor's rookie season was a disappointment, to put it mildly. We'll have more on him soon.

Analysis: If this was the last game that guys like Zach Ertz or Jason Kelce ever play for the Eagles, what a low note it was.

Analysis: One of the underrated worst moves of the last three years by Howie Roseman was lighting a fourth round pick on fire to acquire Avery.

Analysis: Singleton was a rare bright spot this season. He only played 54 snaps the first 5 weeks of the season, and he still finished 15th in the NFL with 120 tackles. Give him those 5 full games as a three-down LB, and he probably would have led the NFL in tackles.

Edwards has a role going forward as a run down LB.

Analysis: The following cornerbacks were out:

And then also Jalen Mills. As such, Ford started at corner. When Ford went down, he was replaced by Houston. And Washington still only scored 20 points!