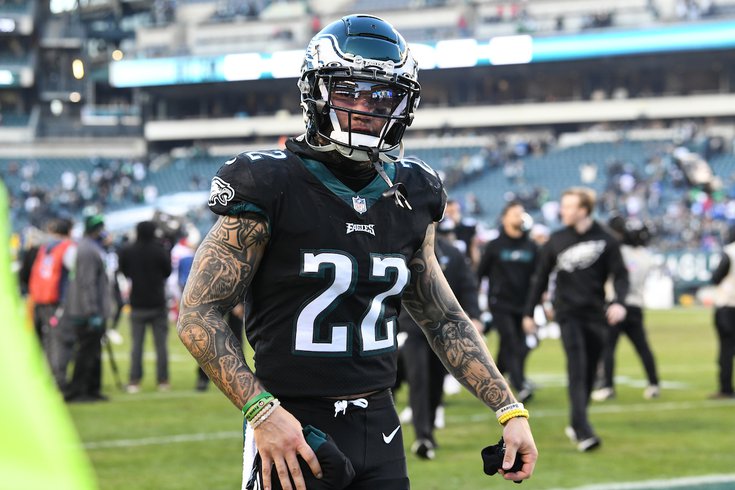 Marcus Epps has played every snap so far in 2022.

On the day after the Philadelphia Eagles play a football game, we typically publish the team's snap counts. Since the Eagles are on their bye week, let's take a look at their year-to-date snap counts, and analyze what playing time trends we can look forward to the rest of the season.

So far this season, the Eagles have played 446 snaps on offense, and 390 on defense.

Analysis: Hurts has been durable through the first six games, as Gardner Minshew has not yet taken any snaps.

Analysis: The running back rotation has been pretty straightforward. Sanders is the clear No. 1 back, with Scott backing him up. Kenny Gainwell is the two-minute back, who also gets some sporadic snaps on obvious passing downs. Sermon has mostly been inactive on gameday, playing only when Scott has been hurt.

Analysis: Watkins has played 56 percent of the snaps and he only has 9 targets this season, most of which have been near the line of scrimmage. Hurts connected with Watkins on a 53-yard TD bomb against the Vikings, but he has otherwise averaged just 7.0 yards per catch. Watkins can take the top off the defense, and the Eagles' offensive staff should probably look to take a few more shots down the field to him, even if they lead to incompletions, if for no other reason than to keep opposing defenses honest.

There are no surprises on the snap counts at wide receiver otherwise.

Analysis: Goedert is playing 87.7 percent of the snaps, by far the most of his career. He was actually leading all tight ends in the NFL in offensive snaps heading into Week 7. The next-closest player behind him, ironically, was Zach Ertz.

Stoll has played a somewhat surprising 40 percent of the snaps. I imagine that percentage would be lower if the Eagles hadn't had big leads in every game.

Analysis: All five of the Eagles' starting five offensive linemen have had to come out of games at some point this season. Kelce continues to marvel as an ironman, as he has only missed three snaps.

Driscoll and Opeta have both filled in competently at multiple positions when their numbers have been called.

Analysis: This is the most interesting group to analyze so far this season, in terms of snap distribution.

• Davis has gotten work almost solely as the nose tackle in odd-man fronts. The Eagles did not trade up for him in the first round to have that limited of a role, long-term. My understanding is that he will begin seeing more action in four-man fronts as the season progresses, but his lack of playing time is in no way stamina-related.

• Cox played 48 snaps Week 5 and 50 snaps Week 6 after averaging 37.5 snaps per game the first four weeks of the season. The Eagles are cognizant that he should not be playing 50 snaps in a game. His earlier usage this season seemed like the sweet spot, where he can be full go when he plays, and stay fresh for the stretch run.

• Hargrave's snaps have mirrored Cox's snaps. He played 46 snaps Week 5 and 48 snaps Week 6 after averaging the same number of snaps as Cox (37.5) the first four weeks of the season. Again, the Eagles are aware that his snaps should be closer to 38 per game than 50 per game. My expectation is that Davis will begin rotating in on four-man fronts at some point, giving Cox and Hargrave more breathers.

• The Eagles seemed to have found an ideal amount of usage for Graham. He hasn't played more than 33 snaps in any game this season, and he is averaging 28 snaps per game. At 34 years of age, Graham has been very productive in a rotational role.

• Williams has not yet popped after showing promise as a rookie, and the team doesn't seem to trust Jackson, despite the loss of Barnett earlier this season.

Analysis: Heading into training camp, some believed that Dean would start as a rookie, but he had quiet camp, and was clearly outplayed by Edwards and White. We noted at various times this summer that Dean does not have great athleticism, and that his game is reliant on smarts and instincts. He'll be effective when he's the smartest player on the field, like he was in college, but for now he's just a rookie trying to adapt to the NFL.

Analysis: The fivesome of Slay, Bradberry, Epps, Gardner-Johnson, and Maddox is one of the league's best. McPhearson and Scott have been competent backups when they have had to fill in, but Wallace was a liability Week 6 against the Cowboys.

Epps has played 100 percent of the snaps so far this season.