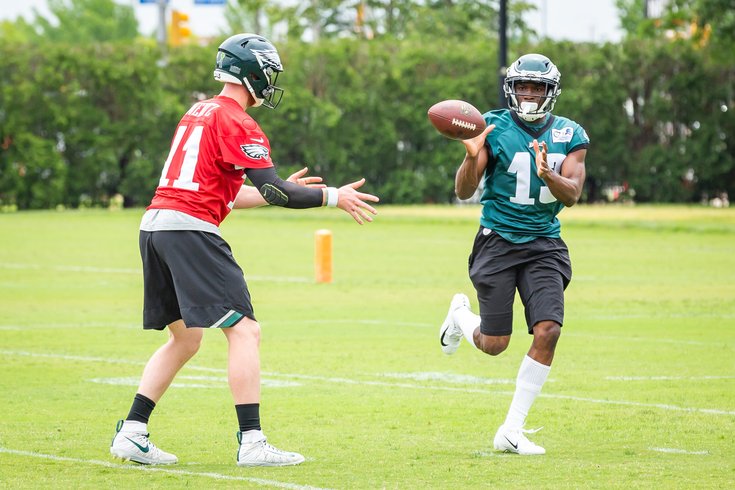 Nelson Agholor would have dropped this in 2016.

On Tuesday, the Philadelphia Eagles conducted their final training camp practice of 2019. Well, sort of. They'll have joint practices next week with the Baltimore Ravens, which media will be allowed to attend, and then they'll continue to practice, obviously, until the start of the regular season. But training camp is now technically over.

Today's practice was a light one, in shells and shorts, and the team mainly worked on the red zone. As always, we have notes. Today, they're all red zone notes.

• The defense was excellent today, with a number of pertinent defensive backs making plays on the football.

• On the Scandrick interception, while Scandrick made a good play, he was aided by Kessler's pass taking the scenic route to get there. The difference in Kessler's arm strength vs. Wentz's really is jarring. On one Wentz incompletion, his throw came screaming through the back of the end zone, and it hit a divider pole on a hop. The pole went down hard, and took two additional poles connected to it with chains along with it. (It was more impressive than it sounds.)

• After practice, Wentz was asked a good question about his tendency to stay in the pocket throughout camp, which Wentz downplayed as a conscious thing that he or the team is doing. I agree with the reporter's (Dave Zangaro's?) notion that he has not often looked to make plays on the run this year, like he has in previous training camps. I'm not sure if there's anything to make of that or not at this point, but it's worth filing away, perhaps.

• Free agent addition DT Malik Jackson has done some nice things in camp. Previously we mentioned that Jackson uses his 6'6 frame to his advantage with a "club over" move to beat shorter interior offensive linemen on his pass rushes. He also uses that height to bat down passes at the line of scrimmage, and he got one today.

I was curious what his batted pass numbers look like, so I took a look:

I didn't include his rookie season in 2012, because he barely played. Anyway, he's averaging just shy of four per season, which is good. In 2015, he unofficially was second in the NFL, with 7.

Batted passes can lead to great things for a defense. At a minimum, if you can bat a pass at the line of scrimmage, you're going to get an incomplete pass, barring some flukey play in which the pass lands in the arms of an opposing receiver anyway. They can also lead to interceptions if you can affect the trajectory of the pass by tipping it, or by simply getting a hand in the QBs face, making the him adjust his throw in the same way a basketball player might throw up a bad shot to avoid it from being blocked.

Jackson could be an asset in this way against shorter quarterbacks like Drew Brees and Russell Wilson, both of whom have had plenty of success against the Eagles.

• As we noted a month ago, Nelson Agholor's hands have improved each year he has been with the team. I didn't track the team's drops in 2015 (Agholor was a drop machine that year), but here's what Agholor has done, drop-wise, since 2016:

I used to goof on Agholor's proclivity for dropping the football. For example (yes I realize he's not No. 17 anymore -- I created this years ago):

Not anymore. All throughout camp, Agholor has shown very good hands. Today, he went up high for a Wentz heater in the back of the end zone, which he snatched out of the air, and managed to come down with both feet in bounds.

With the excitement of new weapons like DeSean Jackson and Miles Sanders, guys ready to make a leap like Dallas Goedert, and already-proven vets like Ertz and Jeffery in the fold, Agholor is something of a forgotten man in this offense, but he has had a very good camp and the expectation here is that he'll also have a productive season.