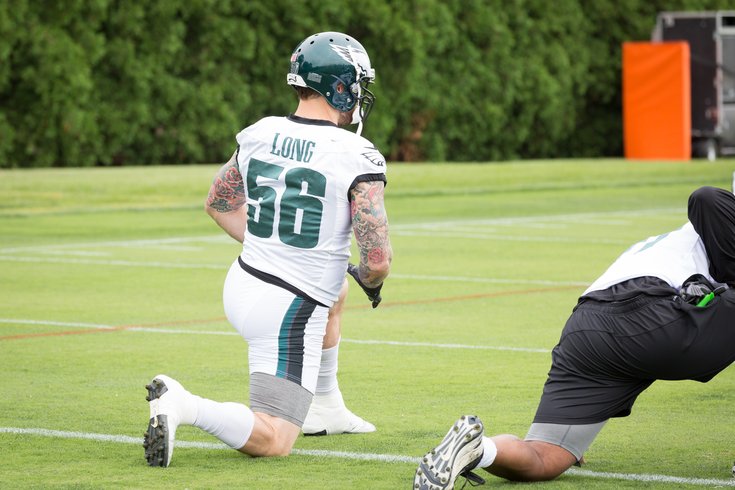 Chris Long during OTAs at the NovaCare Complex.

Today we'll turn our attention to the defense, beginning with the defensive ends.

Looking solely at sack totals, Graham's production won't exactly wow anybody. He had a personal best 9.5 sacks in 2017 and has just 38.5 for his career. However, any close observer of the team can clearly see that Graham consistently creates pressure in the passing game and is one of the best run defenders in the NFL. He is easily the Eagles' best edge defender, and among the top 10, league-wide. He helped lead the Eagles' No. 1 ranked run defense in 2017, and oh, by the way, he also made perhaps the biggest play in Eagles history in the Super Bowl.

Graham is entering the final year of his contract, and his long-term standing with the team has been watched closely all offseason. Graham is now 30 years old, but his snap count total over the course of his career is relatively low when compared with other 30-year old regular starters at his position. Also complicating a long-term deal is the fact that Graham missed all of spring practices while still recovering from ankle surgery. His readiness for training camp remains in question.

Barnett looks like a player, and it's a good bet he moves into a starting role in 2018 after a good rookie season. During the regular season, Barnett had 21 tackles, 5 sacks, a forced fumble that was returned for a touchdown, two fumble recoveries, and two blocked kicks.

In the NFC Championship Game, he had a huge strip sack of Case Keenum with the Minnesota Vikings knocking on the door in the Eagles' red zone, and still very much in the game. In the Super Bowl, Barnett alertly grabbed Tom Brady's fumble on Graham's strip sack. Not bad for a guy who played through a sports hernia injury throughout the season.

In the NFL, pass rushers typically get off to slow starts at the outsets of their careers. Rookie seasons like the one Joey Bosa had for the Chargers in 2016 (10.5 sacks in 12 games), for example, are few and far between. Below is a list of the 18 players who had at least 10 sacks last season, showing how many sacks they had their rookie season vs. their second season:

As you can see, only three players from the sample size above saw their sack production dip in their second year, while nine improved their output by at least four sacks. It is reasonable to expect an uptick in production from Barnett in Year 2.

Long was a very productive role player for the Eagles last season as a rotational defensive end. During the regular season, he had 5 sacks and 4 forced fumbles. In the playoffs, he generated perhaps the biggest play in the NFC Championship Game, when he affected a Case Keenum pass that was returned for a touchdown by Patrick Robinson.

Off the field, Long was respected leader who helped keep the team a cohesive unit.

After some hand-wringing that Long might call it a career after winning his second Super Bowl in as many years, he decided to play at least one more season, allowing the Eagles to maintain their ability to throw "fastballs" at opposing offensive lines.

Bennett was a productive long-time starter in the NFL, who will likely be more of a role player with the Eagles and their stacked defensive line. Last season, Bennett had 25 tackles and 8.5 sacks. Over the last six years, he has 48 sacks and 10 forced fumbles. Bennett can still play, but he's 32 years of age, and will turn 33 in November.

Bennett, like Graham above, is also a versatile player who can kick inside to defensive tackle on obvious passing downs, and will help the Eagles depth at both spots.

Means was actually a Chip Kelly regime acquisition, when the team signed him off the Texans' practice squad late in the 2015 season. In each of the last two seasons in 2016 and 2017, Means has had to scratch and claw to make the roster as a bubble guy, though he has typically been a healthy scratch on game day, as the Eagles have stayed healthy at DE.

With a defensive end rotation that got even more crowded after the Eagles drafted Josh Sweat in the fourth round of the 2018 NFL Draft, it will be even harder for Means to crack the roster once again in 2018, but he has become something of a Jim Schwartz favorite.

Sweat was projected by many as a Day 2 pick, but the Eagles were able to nab him in the fourth round, as noted above. He is a 6-foot-5, size-speed freak with 4.52 speed, and other extremely impressive measurables:

Landing him in the fourth round is excellent value. At 251 pounds, Sweat is a difficult projection to 4-3 defensive end, as he would likely have to put on weight to hold up at the point of attack against the run. He also comes with injury concerns stemming from a devastating high school injury in which he had surgery to repair his ACL, MCL and PCL.

Sweat is more potential than production. In 2016 at Florida State, he had 41 tackles, 7 sacks, and 1 FF. In 2017, he had 56 tackles, 5.5 sacks, and 0 FF. But certainly, with an already loaded defensive line, the Eagles can exercise patience with Sweat to develop into a professional quarterback hunter.

I liked what I saw out of Sweat in the spring. There's little question about his explosion. His get-off at the snap is impressive, and he has the speed to get around the edge as a pass rusher. However, when they put the pads on in training camp, Sweat will also have to prove that he can defend the run if he's ever going to see the field.

Ostman was a highly productive pass rusher in his final season at CMU, where he had 60 tackles (19.5 TFL), 14 sacks, and 3 forced fumbles. His highlight reel is fun to watch, and he looks to dish out as much punishment as possible on the quarterback whenever he gets a chance.

Ostman's best trait is his motor, which can lead to good production in college, but might not get you drafted. From NFL.com:

"He's got those short legs like a penguin, but don't let that fool you because he will outwork most of the guys across from him. I would love to see what his fitbit step count is during a game. That guy is constantly moving and chasing and hustling." -- AFC team scouting director

At a minimum, Ostman should give the Eagles' offense a handful to deal with in camp, but it'll be tough for him to crack the roster in an extremely crowded DE group. He'll have to stand out in a big way on special teams.

Ezechukwu was a linebacker in college who is trying to transition to a 4-3 DE in Eagles camp. He is probably just a camp body.