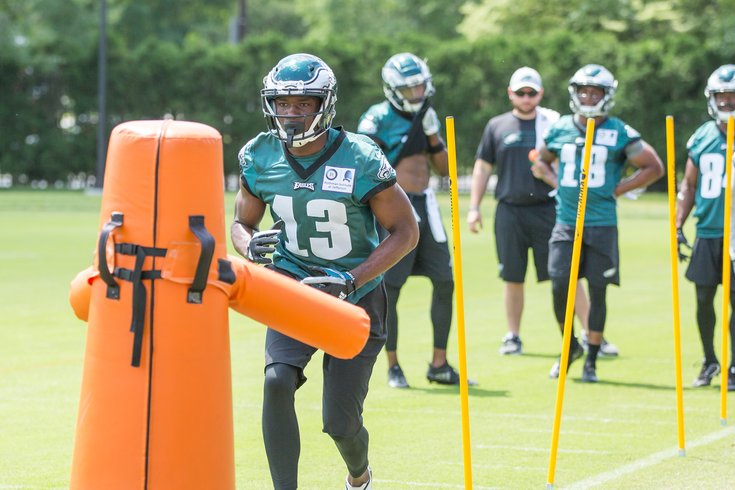 Nelson Agholor tries to intimidate a tackling dummy during OTAs at the NovaCare Complex.

Leading up to training camp, we'll take a look at every player on the Philadelphia Eagles' roster, and how they fit with the team. On Friday, we started with the quarterbacks. On Saturday, we continued on with the running backs. Today, we'll look at the wide receivers.

In 2016, the Eagles had arguably the worst wide receiver corps in the NFL. For example, Jordan Matthews led all Eagles receivers with just 3 TDs. The production difference from the Eagles' passing game from 2016 to 2017 was night and day, for the better. The biggest reason for that, of course, was the stellar play of Carson Wentz, but certainly, a far better wide receiving corps helped, led by Jeffery.

After signing with the Eagles, Jeffery had 57 catches for 789 yards and 9 TDs. He was also productive in the playoffs, catching 12 passes for 219 yards and 3 TDs.

During the 2017 season, the Eagles re-signed Jeffery to a four year extension worth $52 million, a bargain compared to some of the other contracts doled out to wide receivers during 2018 free agency.

Jeffery was a non-participant in spring practices, and he is still recovering from surgery to repair a torn rotator cuff suffered during 2017 training camp. He could be ready for the preseason.

Wallace will be the No. 2 receiver in the Eagles' offense, but he will essentially serve as the fourth receiving option, behind Jeffery,  Zach Ertz, and Nelson Agholor.

Earlier this offseason we cut up all of his targets in 2017:

Wallace is a deep threat, clearly, as he was able to get behind the defense for a number of big plays in 2017. The Ravens should have also connected on plenty of other opportunities in which Wallace got open vertically, but he was the victim of several off-target deep throws by Joe Flacco.

Despite the missed opportunities, Wallace has nine receptions of 40 or more yards over the last two seasons. The Eagles, as a team, have just 14 over that same span. Opposing defenses will have to respect Wallace's deep speed, which should open up the intermediate areas of the field. He'll essentially have the same role that Torrey Smith had last season, but with better speed and hands.

This time last year, Eagles wide receiver Nelson Agholor had a paltry 59 career catches, 648 yards, and 3 TDs in his first two seasons, despite starting 26 games. He was also responsible for taking two touchdowns off the board by not lining up correctly and had his share of egregious drops. It wasn't just that he wasn't making plays. He was actively hurting the offense even when not involved in the play.

Many (self-included) considered him a bust. That all changed in 2017.

After the Eagles found a pair of wide receivers in Jeffery and Smith to play on the outside and then traded Matthews, the team moved Agholor into slot. In his new role, Agholor flourished, catching 62 passes for 768 yards and 8 TDs, while making a number of highlight reel plays along the way. Oh, and he also had nine catches in the Super Bowl on 11 targets.

Hollins was a core special teamer in 2017, and the team's fourth receiver. On the season, he had 16 catches for 226 yards and one memorable TD against the Redskins in which he unveiled the backpack kid dance.

He also had a great touchdown reception against Green Bay in the preseason in which he stiff-armed the entire Packers defense.

Barring injury to the top three receivers, Hollins will return in the same role he played in 2017, but may see a modest increase in opportunities.

Gibson had one of the worst training camp performances I've ever seen out of a wide receiver last year, as he simply couldn't catch the football. Still, being a fifth round pick, the team stuck with him, and he was even active throughout the playoffs.

The Eagles drafted Gibson because they liked his ability to make plays down the field. Here's his production the last two years he was at West Virginia:

Gibson was far better during spring practices than he was a year ago in training camp, but he still has a ways to go before he'll see any kind of significant role in the Eagles' offense.

This offseason, the Eagles signed Wheaton to a veteran minimum deal. Wheaton was a once-promising receiver whose career was on an upward trajectory heading into the 2016 season:

In Wheaton's contract season in 2016, he had a lingering shoulder injury and was placed on IR after appearing in only three games. During the 2017 offseason, Wheaton signed with the Chicago Bears on a two-year deal worth $11 million, and $6 million guaranteed.

The Bears didn't get their money's worth. Wheaton had an emergency appendectomy in training camp, and struggled with finger and groin injuries, though he did appear in 11 games. He was released after just one season.

As a low-cost flier, Wheaton makes sense for the Eagles as some added depth with upside, and he made some plays during spring practices.

Wilson is a bigger receiver at 6-foot-4, 206 pounds, with some downfield receiving ability. He has appeared in 31 NFL games, starting 14, catching 56 catches for 777 yards and 3 TDs over a four-year career. Joe Douglas was in Chicago the year Wilson started six games for the Bears, catching 28 passes for 464 yards (16.6 YPC) and a TD. In three years at Washington State, Wilson had impressive numbers, catching 189 passes for 3207 yards (17.0 YPC) and 23 TDs.

Wilson was banged up during the spring, and missed practice time.

Ward was a college quarterback who converted to wide receiver at the NFL level. I felt that he had a good camp in 2017, but was ultimately unable to crack the final 53-man roster. He did stick on the practice squad for the majority of the season last year, and should have more comfort at wide receiver after a full year practicing there.

Davis made a number of plays during spring practices, and looks like a shifty runner once he has the ball in his hands. He'll compete for reps at punt returner and in the slot. Doug Pederson has noticed him.

"I went into this off-season wanting to look at a lot of our younger players, obviously, from a year ago," Pederson said. "I think guys like Rashard Davis and Greg Ward come to mind, Shelton Gibson come to mind, that have had really good springs."

Davis' appeal to the Eagles is undoubtedly his punt return skills. At James Madison University in 2016, Davis had 15 punt returns for 426 yards (28.4 per return) and 4 TDs. A highlight reel:

Davis stuck on the practice squad for a big chunk of the season last year. I think the Eagles are going to give him a legitimate chance to earn a roster spot because of his added value on special teams, but he'll have to stand out in a big way.