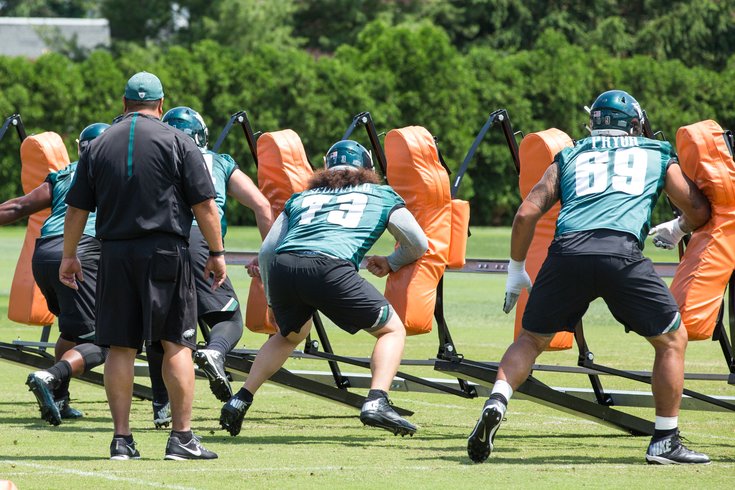 Isaac Seumalo and Matt Pryor during OTAs at the NovaCare Complex.

Today we'll look at the guards and centers.

This time last year, many Eagles fans had completely soured on Kelce and were looking forward to the Isaac Seumalo era to begin in Philly. The Eagles, in fact, would have traded Kelce had a decent enough offer come along. Luckily for them, that didn't happen, as Kelce earned First Team All-Pro honors in 2017, and then made the most important speech in the long, storied history of Philadelphia.

With his extreme athleticism, Kelce can do things that no other center in the league can do. The trade-off on that in the past, unfortunately, was that he could often be overpowered by much bigger interior defensive linemen. Last season, Kelce remained the athletic playmaker that he has been, but his overall game against the big boys was vastly improved, and Carson Wentz did not have to fear the pocket collapsing right in front of his face.

Brooks made the Pro Bowl for the first time in his career last season, as he and Lane Johnson formed unarguably the best RG-RT tandem in the NFL.

I had Brooks down for one sack allowed last season. On the whole, he provided excellent pass protection, and at 340-plus pounds, he was able to move bodies in the run game.

In 2016, Brooks missed a pair of games while dealing with anxiety. He seemed to conquer those issues in 2017, as he played in all 19 games.

Wisniewski entered the 2017 season as the fourth guard in the pecking order behind Brooks, Isaac Seumalo, and Chance Warmack. After Seumalo got hurt, Wisniewski and Warmack were part of an odd "LG by committee" approach, with Warmack getting more snaps initially.

After proving that he was clearly better than Warmack, Wisniewski won the job outright and was the starter for the remainder of the season, while never exiting the game because of a coaches' decision.

Wisniewski is a solid starting guard, who would also probably be the primary backup at center if Kelce went down.

When Wisniewski did miss a pair of games late in the season against the Giants and Raiders, Warmack played and held his own, but he does not have the same type of ability to get out in front of screens and to the second level of the defense like Wisniewski does.

Warmack was the 10th overall pick in the 2013 NFL Draft who has obviously not lived up to pre-draft expectations. The Eagles signed him to a cheap one-year deal last year, and then added a year to his deal before the season even began.

Warmack is a nice backup specifically at guard, but does not offer anything in the way of positional versatility.

Seumalo is in the conversation for worst game of the season of any Eagles player in 2017, for his performance against the Kansas City Chiefs Week 2. Seumalo gave up as many sacks (4) in that one game as Peters, Johnson, Kelce, and Brooks combined gave up all season.

After an encouraging rookie season, Seumalo entered the 2017 season as the starting LG, but was benched after his dreadful Chiefs performance. He is a rare example of an Eagles player who did not meet expectations in 2017.

Seumalo has already played five different positions (LG, C, RG, RT, TE) in his two years in the NFL, and is the type of versatile offensive lineman smart teams covet.

"He can play all five positions, and the tight end position (in jumbo sets)," said Jeff Stoutland in June. "I think last year he played every position. Because of his athleticism, and his quickness, and his feet, he can do that stuff. Like I said, that’s tremendous value for any player. In this league, with the number of players they allow you to keep, it’s advantageous to be able to play more than one spot."

With so many teams around the league in desperate need of offensive line help, some team out there might find it worth parting with Day 3 pick for Seumalo. Otherwise, the Eagles will simply hang onto him and hope that Seumalo can get over a rough season early in his career the same way Nelson Agholor did.

In 2016, Greene received the most guaranteed money of any undrafted free agent in the NFL.

That investment has not yet paid off for the Eagles, as Greene has been on and off the practice squad over the last two seasons.

Evans played tackle in college at UCF, but he is making the move to guard at the pro level. The Eagles spent their final two draft picks on offensive linemen, so Evans (and the other Eagles undrafted offensive linemen) will have a difficult time jumping them for roster spots. Evans will fill out a third-team guard spot in camp. There's a highlight reel of Evans on the Patriots' website.

Toth was actually getting second team center reps in OTAs, but that was because Seumalo was sitting out with an "upper body injury." Even as the "third team center," Toth is buried even further, as Wisniewski would certainly play center in a meaningful game before Toth ever saw the light of day.

Should Toth have some kind of impressive camp, that might make the Eagles feel better about a trade of Seumalo, but that feels like a long shot.

Park is a guard/center versatile player who also started for Northwestern and Slippery Rock. He is a camp body, but one with other talents.

*To note, we covered Matt Pryor in the OT section, as he has been getting reps at both guard and tackle.