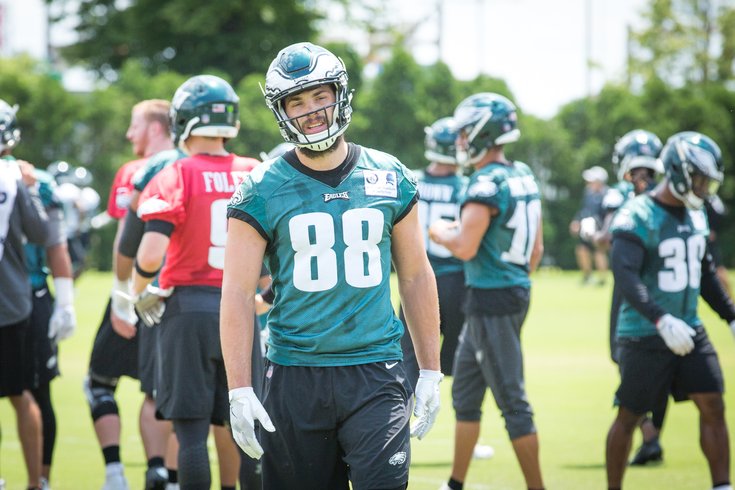 Is this the year that Ertz will have his "breakout season?" (Kidding.)

Ertz's numbers have improved each year he has been in the NFL, and is now arguably a top three tight end. His numbers:

Ertz also had a big postseason, catching 21 passes (on 26 targets) for 214 yards, and 2 TDs, including a crucial fourth down conversion as well as lead-changing touchdown reception late in the Super Bowl.

At a lower level of college football, Goedert dominated, which is what you would expect of a legitimate NFL prospect. In 2016, Geodert caught 92 passes for 1293 yards and 11 TDs. In 2017, he had 72 catches for 1,111 yards and 7 TDs. You'll see in his highlight reel that Goedert has the ability to make outstanding catches:

The most successful teams in the NFL get it done in the red zone. In fact, the top three teams in red zone efficiency last season were the Eagles, Patriots, and Jaguars. I think we can agree all three of those teams had good seasons in 2017. Goedert could be a matchup nightmare for opposing defenses, who already have to contend with covering Alshon Jeffery and Ertz.

If there's one thing that Doug Pederson has proven he is great at, it's forming his offensive schemes around the personnel in place, and Goedert will give the Eagles' offense the flexibility to continue to use two-tight end sets.

In the 10 or so spring practices that were open to the media, I did not see Goedert drop a single pass. If you put the ball on him, he's catching it. Goedert also looks nothing like a rookie from a Division 1-AA school when it comes to route running. He has consistently gotten open, and he has one of the best route runners in the NFL (any position) in Ertz to look up to in that regard.

I believe that Goedert will be the No. 2 tight end from Day 1, and has a great chance to put up better numbers in his rookie season than departed free agent tight end Trey Burton ever has.

Rodgers was a veteran minimum free agent acquisition who had his best season with the Packers in 2015, when he had 510 receiving yards and 8 TDs. He had a very unproductive 2017 season, when he had just 12 catches for 160 yards and 1 TD. His career stats:

Way back in April, we cut up all of Rodgers' targets in 2016 (we chose 2016 over 2017 because he was not as involved in the offense, and because the Packers weren't the same without Aaron Rodgers):

The most glaring takeaway that I had of Rodgers during that exercise was his inability to create separation. More often than not, safeties and linebackers were draped all over him, and you see an abnormal number of pass breakups relative to his number of targets.

One of the knocks on Rodgers is his speed. At the 2014 NFL Combine, he ran a 4.87 40, and didn't have impressive measurables otherwise. That lack of speed shows up on game day.

In Green Bay, many of Rodgers' receptions came as a result of an elite quarterback willing to attempt tight window throws, whereas he might otherwise be a complete non-factor with, say, a timid quarterback like Sam Bradford. In Philadelphia, Rodgers will again play with a strong-armed quarterback in Carson Wentz who is more than willing to make throws into tight windows.

The Eagles needed to fill two holes at tight end, and this was very clearly a Band-Aid signing, though Rodgers does at least bring 63 games of regular season experience, and seven games of playoff experience. He should be as effective as Brent Celek, who was obviously in the declining stages of his career.

From a developmental standpoint, Brown was an interesting player the Eagles added as an undrafted free agent during the 2017 offseason. In 2016 at Shepherd University, Brown had 99 catches (led D2) for 1,580 yards (second in D2) and 22 TDs (tied for second in D2) as a wide receiver. He has since bulked up a bit to play tight end in the pros, as he is now listed at 6-foot-4, 255 pounds.

Brown is going to have to really turn it on during training camp, as he did not have a strong spring, dropping several passes and being unaware that the ball was coming his way on others.

Perkins actually made an NFL roster in the past, spending the entirety of his rookie season (2016) with the Atlanta Falcons, and even starting a game. In eight games in 2016, Perkins had 3 catches for 42 yards, and this impressive catch for a TD.

In spring practices, Perkins made his share of catches, at least enough so to make me look at my roster sheet to see who he is. Most hardcore Eagles fans know all about Billy Brown, but there's an argument to be made that Perkins is more likely to make the Eagles' roster.

Zaruba, Jamaica, ooh I wanna take you... Sorry. Zaruba was in Eagles training camp in 2017, but was a raw prospect with little chance of making the team. Previously, he was a Canadian rugby star. Zaruba's bio on the CanadaSevens website:

Zaruba hit the ground running in 2014-15 after he was named in the squad for the series’ opening tournament at the Gold Coast Sevens. He wouldn’t look back, as Zaruba played in all nine legs of the Sevens Series in his debut campaign. The North Vancouver native had been playing for Capilano RFC in Vancouver for a number of year’s before his call-up to the national side and still at a good age, Zaruba has a great deal of promise in front of him.

I have no idea what any of that means, but it sounds good, I guess, and the Eagles love them some oversized rugby dudes. In camp last year, Zaruba didn't have any kind of impact, but the team must have seen enough to think they can continue to try to unlock his football potential. At 6-foot-5, 265 pounds, Zaruba has good size, and one of the positive traits he has shown is that he brings some thump in his run blocking.