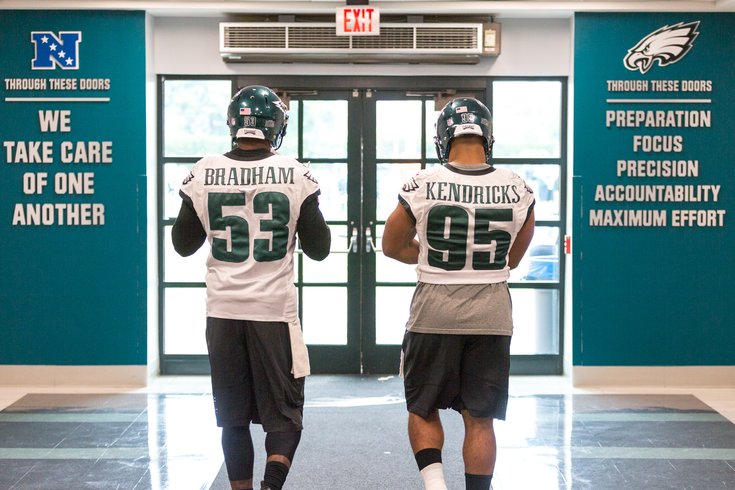 Mychal Kendricks is still, just, there.

Next Monday, there will be football again, as quarterbacks, rookies, and select veterans will report for training camp. Leading up to camp, we'll be taking a look at each positional group. Today we'll preview the linebackers.

First, here's a look at the depth chart at linebacker:

As PhillyVoice first reported a few weeks ago, Jordan Hicks injured his hand while on his honeymoon in Greece. To be determined if Hicks will be a full go when training camp begins.

Hicks has been a playmaker through his first year and a half in the NFL. In just 24 games (he missed eight games his rookie season), here are his numbers:

At the other starting spot, Nigel Bradham returns, but with questions. According to Tim McManus of ESPN, Bradham will avoid jail time for his alleged assault of a "cabana boy" last summer. However, while Bradham may have avoided more serious consequences from the courts, he may still face discipline under the NFL's Personal Conduct Policy.

That is only one of two off-field incidents that Bradham was involved in last year. McManus' report also notes that Bradham is scheduled for a July 24th hearing stemming from his October 2016 arrest for carrying a loaded gun in his carry-on bag at the airport.

In 2016, Bradham played more snaps than any other Eagles linebacker.

He was a quality free agent signing, although his play on the field was overshadowed by his missteps off of it. To be determined if he'll face discipline from the NFL this season. If so, the Eagles are not flush with quality depth at linebacker.

As for the other "starting" linebacker spot (it really ins't), Mychal Kendricks is still, just, uh, there. The Eagles tried to trade Kendricks this offseason, even reportedly coming close to a deal with the San Francisco 49ers back in February.

While Kendricks has been bad at times, he has flashed his athletic ability at other times. Unfortunately for Kendricks, Jim Schwartz has been unable to find creative ways to use him to the best of his abilities. For example, in the view of many talent evaluators, Kendricks' best trait as a linebacker is his blitzing ability. In 2016, Kendricks rushed the passer a grand total of just nine times, according to ProFootballFocus. That's simply a misuse of a player.

Kendricks could still be dealt, but with each day that passes, it becomes less likely. #Analysis.

As for the backups:

• Joe Walker: Walker will have to show that he has recovered fully from his ACL injury during the preseason last year. At the time, Walker was looking like a Schwartz favorite during training camp. He could be the backup middle linebacker to Hicks as well as a special teams contributor, but his roster spot is far from guaranteed.

• Nathan Gerry: At Nebraska, Gerry was a safety who will convert to linebacker in the pros. Gerry was something of a ball hawk in college, picking off 13 passes his last three years.

The question likely won't be whether or not Gerry can cover well enough at the pro level from his linebacker spot. It will be whether he can hold up physically as a linebacker at 218 pounds. Throughout OTAs and minicamp, Gerry showed good instincts in coverage, as you might expect from a former safety. During OTAs and minicamp, he picked off at least two passes in media-attended practices. He has also put on about 10 pounds since he weighed in at the Combine.

Gerry will be an interesting player to watch when the pads go on.

• Najee Goode: Goode is a career roster bubble guy who can play multiple linebacker positions as well as special teams.

• Kamu Grugier-Hill: Grugier-Hill was a post 53-man cutdown signing a year ago, whose roster spot may be challenged by the addition of Gerry. Grugier-Hill will have to show that he can be more than just a special teams guy.