Eagles over/unders: How many times will the broadcast mention Nick Foles winning the Super Bowl? 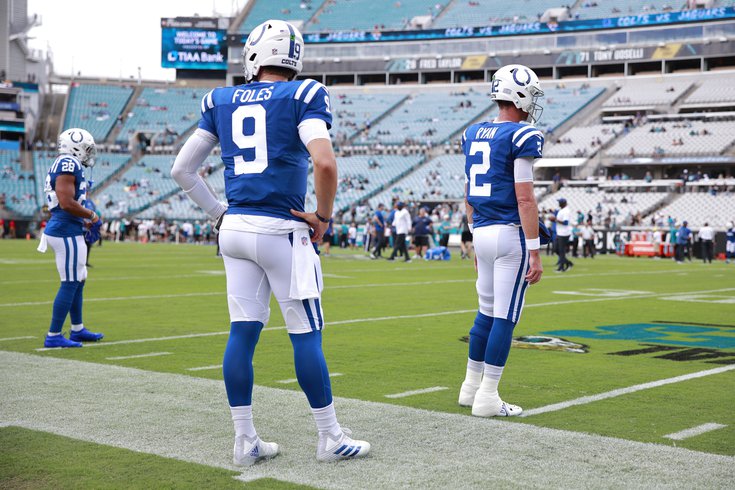 It's been a bit given the way Phillies hysteria took over the city's sports media scene, but I am back with my take on Eagles over/unders. The Eagles are reeling after a home loss on 10 days' rest to the Commanders and looking to bounce back against a 4-5-1 Colts squad. As Eagles fans learned the hard way this past Monday, there are no easy wins in the NFL. A road game is a road game and the Birds will be tested.

Given all that, here are five over/unders I've conjured up for the matchup on Sunday...

To note: these are made up numbers unless directly stated and what I would bet in a hypothetical situation. Obviously, you can't bet on nonsense like broadcast mentions, but I like to have fun with it.

That 88.5 mark is Taylor's official over/under on DraftKings Sportsbook. I'd have pegged it a little higher to be honest. The Eagles' run defense is the most-maligned aspect of the team right now, forcing the front office's hand to go out and sign a pair of 30-something defensive tackles in Linval Joseph and Ndamukong Suh this week.

Here are Taylor's rushing yards per game numbers for his career:

Taylor was superhuman in 2021 when he led the whole NFL in yards from scrimmage and total touchdowns, but he hasn't quite been that guy in 2022. Still, he's on another plane compared to Dameon Pierce and Brian Robinson, the two talented young RBs who've gashed the Eagles' defense in Weeks 9 and 10.

Though I am not expecting a win for the Colts, I am expecting Taylor to get his. I'll say he tops the 100-yard mark.

Why couldn't Nick Foles be active for this game? Matt Ryan is back as QB1 and second-year quarterback Sam Ehlinger is the current backup. Foles, who guided the Eagles to their first ever Super Bowl championship, is bouncing around the league in his post-SB career and the third-stringer in Indy. He won't suit up on Sunday. It doesn't matter though. He's the most important Eagle of my lifetime and a life-changing figure for me. He played the two best games I've ever seen a Philadelphia athlete play.

This whole article was a great excuse to gush a bit about Foles.

It's the first time Foles' team is facing the Eagles in a regular season game even without the SB MVP himself taking the field. I can only imagine the fanfare around this game if Foles was the guy under center for the Colts.

Yeah, he's not playing, but the broadcast crew of Ian Eagle and Charles Davis is certainly going to bring up Foles' high highs with the Birds. How can you not?

The Birds are in a tough situation with Dallas Goedert heading to IR. Kansas City's Travis Kelce aside, Goedert has played like the best tight end in football this year, his first season finally as the unquestioned TE1. Rough. Huge loss. The Eagles will turn to a crop of vastly unproven tight ends to take his place.

Jack Stoll is in line to be the Eagles' top tight end this week. He's in his second year in Philly after spending 2021 as an undrafted rookie free agent out of Nebraska. In the 16 games Stoll took part in last season, he actually played 32 percent of the offensive snaps as the Eagles went heavy with multiple-tight end looks as they crushed opponents on the ground. Given that, Stoll has been used almost exclusively as blocking TE. In 575 career offensive snaps, he has eight catches. He's legit in the run game, but that's what the Eagles are dealing with at tight end.

Grant Calcaterra, a sixth-round rookie out of SMU, will see an increased role too. He's a bit of an inverse of Stoll, here for his upside as a pass-catcher. In his last collegiate season, Calcaterra had 38 catches for 456 yards with four touchdowns.

The mystery man here is Tyree Jackson, who is back on the 53-man roster after spending most of 2022 rehabbing from a torn ACL he suffered in Week 18 of the 2021 season. He scored his first NFL touchdown in that game. Bummer. Eagles fans get amped about Jackson because of his measurables and athletic traits (6'7", 249 lbs., 4.59 40-yard dash) and because he's a converted college QB from the University at Buffalo. The heigh ceiling is there! The threat of a trick play persists!

I expect the Eagles to primarily use four-receiver formations given the lack of Goedert and to shift to two-tight end looks more so in rushing situations. I don't think it's a big day for these guys, so I'm taking the under. Jackson, however, has some juice and I'm eager to see how he comes along in the next few weeks.

Combined tackles for loss and QB hits for Robert Quinn: 0.5

It's been a quiet start to Robert Quinn's Eagles career. He's played 49 snaps for the team over the last three weeks after being acquired for a fourth-round pick from the Bears. In those three games, he has two tackles, 1 QB hit, 0 sacks and 0 tackles for loss. Not ideal.

Is he due for a midnight green breakout? Given the injuries to the defensive line, it's time for him to showcase why he was in 31-year-old All-Pro in 2021 with 18.5 sacks. I'm leaning no, but it'll take just one strip sack against Dak Prescott on Christmas Eve next month for him to be in Eagles fans' good graces.

Matt Ryan being from Philly mentions: 0.5

Colts' starting QB Matt Ryan, who lost his job for a hot minute when Frank Reich was still the head coach, was born in Exton and is a Penn Charter grad. You really don't see many mentions of Ryan being a "Philly guy" among professional athletes and others in the entertainment industry. My guess there is that so much of pro-Philly culture revolves around being an Eagles fan and Ryan, of course, isn't going to be given that he's a quarterback on the NFL who doesn't play for the Birds.

This isn't a Mike Trout situation clearly. Nor is it something like Mikal Bridges being a local college star at Villanova and loving the Phillies during the World Series run. Ryan is simply different and that's neither inherently good nor bad. He's never going to get some true sicko Philly buzz and maybe he's more than okay with that.

Anyway, I think it gets brought up on the broadcast. It's too easy not to!

Including the playoffs, Ryan has played 10 games against the Eagles, going 4-6 with 18 touchdowns and 12 interceptions.