Eagles vs. Lions: 5 matchups to watch 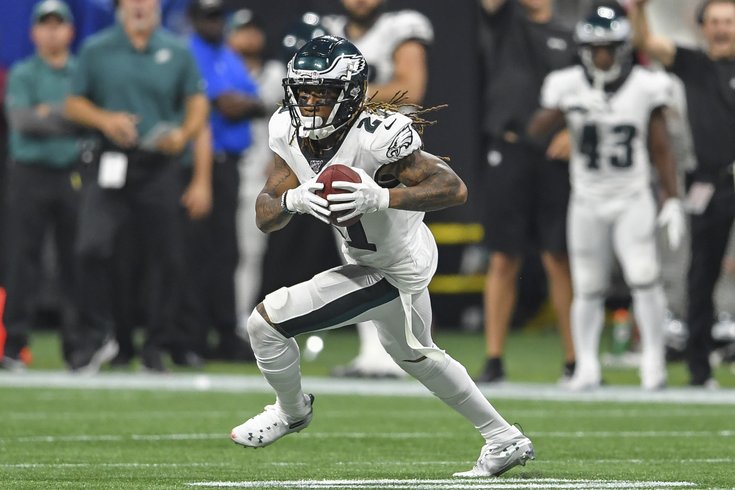 It's a pretty good bet that the Lions will try to test Ronald Darby on Sunday.

In the Philadelphia Eagles' upcoming Week 3 matchup against the Detroit Lions on Sunday, it was a little more difficult to pick out five matchups to watch, considering that Eagles had like 30 guys go down Week 2 against the Falcons and we don't know who will play, and who won't.

1) The Eagles' pass rush vs. the Lions' offensive line

In their first two matchups against Washington and Atlanta, the Eagles faced a pair of shaky offensive lines and failed to consistently generate the kind of pressure we're used to seeing. On the season, the Eagles have just two sacks, tied for the second-lowest total in the league.

"I mean, the ball can come out," Jim Schwartz said, when asked about the lack of production. "I'd rather have an interception on Darby's play than a sack. Sometimes -- I mean, sacks are always good, but you force the quarterback to make an errant throw and you get an interception, that's pressure from blitz, whatever.

Meh. Let's be real. The pass rush has been disappointing so far.

On Sunday, they'll face a mostly "home-grown" offensive line that the Lions have built through the draft, and should have good continuity. Here's their regular starting five:

The Lions have mostly kept Matthew Stafford clean, having allowed just three sacks so far this season, however, the LT spot has been an issue. Taylor Decker struggled mightily Week 1 against the Cardinals, and missed the Lions' Week 2 matchup against the Chargers. In his place, second-year player Tyrell Crosby filled in. To be determined who will suit up Week 3.

Whoever he's facing, Derek Barnett must capitalize on a favorable matchup here. Barnett has six QB hits, and has been a rare bright spot in the pass rush, but some QB hits while the QB still has the ball would be nicer.

2) The Lions' receivers vs. the Eagles' secondary

The Lions have a nice, underrated set of skill position players in the passing game. Their numbers through two games:

Golladay has been Stafford's go-to guy early, as he leads the team with 19 targets. There's maybe a little hyberbole on the following tweet, but Golladay has indeed been good:

Kenny Golladay had 8 receptions for 117 yards and this Game winning TD! Through 2 games Golladay has put himself up there as one of the best WR in the NFL! #OnePride pic.twitter.com/sFCLiIADUY

In Week 2, the Falcons were clearly targeting Ronald Darby, who doesn't appear to have regained his full speed back yet, after tearing his ACL in 2018. Schwartz disagrees with that notion.

"I think he has all of his speed back," Schwartz said. "I don't see the ACL as being an issue at all for him. He's done a great job of rehab. He didn't practice a ton in training camp, so I think -- and we have a few players that are in that boat. So I think that sometimes you can see some of that, I don't want to call it rust at this point, but there is a reason that we still do training camp and we still practice.

"Made a couple big plays for us. There's probably a couple plays he'd like to get back. There's a 50/50 ball that Julio Jones makes a great play on. I don't know that you can attribute that to an ACL or even missing some snaps in training camp. It's just life in the NFL. Those guys are going to make some of those. You have to come back and compete. I like the fact that he gave up a touchdown pass and came back and got an interception. Kept his competitiveness up. I thought that was a good sign from him."

Whether his speed is back or not, the Lions are going to look at the Eagles' film, and they're probably going to determine that Darby is worth testing.

The other player whose name you should know heading into this matchup is T.J. Hockenson, the Lions' rookie first-round tight end, who went 8th overall. Hockenson is off to a fast start.

Hockenson too quick for MLB pic.twitter.com/jQpWQ3GcfZ

The Eagles may have to dedicate Malcolm Jenkins to him.

3) The Eagles' rushing attack vs. the Lions' rush defense

With a hobbled group of receivers, the Eagles are going to have to find a way to run the ball effectively.

Despite having some good run stoppers on defense (like Snacks Harrison, for example), the Lions are allowing 5.2 yards per carry. They've only allowed one rush of 20-plus yards (it went for 40), which means that they are consistently giving up positive yardage on run plays.

Last Sunday in Atlanta, many made the obvious observation that Miles Sanders is perhaps dancing a bit too much in the backfield and bouncing runs to the outside, when he should be hitting holes a little more aggressively. Here's a good example:

Where Miles Sanders could be wiser as a decision maker. pic.twitter.com/JRK81wsqsH

"That's an excellent observation," Groh said. "There were some moments in there where you’d like him to stick his foot in the ground and get north, and he can't outrun everybody in this league like he might have been able to do in the past. That's the learning experience of a young player. We know he's going to learn for it. It's been pointed out and he'll be better for it. We've got a ton of confidence in the guy and he's going to be a really good running back."

When Sanders was drafted, there was little doubt about his ability as a runner, but there were concerns about his pass protection. So far, he has proven to be a good protector, but hasn't yet broken out as a runner. He has talent, and it'll come. Ideally for the Eagles, that'll be this week.

4) The Eagles' receivers vs. the Lions' secondary

Who is even going to play for the Eagles? It appears as though DeSean Jackson could be out for a couple weeks, and Alshon Jeffery's status is uncertain.

If Jeffery is a go, I imagine he'll draw a lot of attention from Darius Slay, an elite cornerback who doesn't get the attention he deserves.

Can Nelson Agholor shake off his awful drop in Week 2? Groh thinks so.

"I think certainly he knows he's got the support of the cave and the players in that locker room, every one of them," Groh said. "It wasn't just one play. We know it was a significant play, but it wasn’t just one play, it's a collection of plays. Nelson has got a lot of confidence in himself. He's got demonstrated performance. He has a resume and he knows he can step up and make plays and as a matter of fact, just a play or two later, he made a huge play for us on fourth down to extend the drive and go up and make that play in traffic like he did.

"So we haven't lost any confidence in him and he's going to be a big part of the reason why we win."

In Week 2, Mack Hollins stepped up to some degree. They'll need him to continue to produce, and they could use more from J.J. Arcega-Whiteside than what he showed in Atlanta.

5) The Eagles vs. the first quarter

In Week 1, there was perhaps a bad penalty called on Jackson that interrupted a first quarter drive. In Week 2, the Eagles were dealing with multiple unexpected injuries very early. They didn't score in the first quarter in either game.

In Week 3, Eagles fans aren't going to listen to excuses for a lack of first quarter production. In 2018, the Eagles scored just 2.6 points per game in the first quarter, worst in the NFL.

That has to change now.