The 10-1 Philadelphia Eagles will head to Seattle this weekend to take on the 7-4 Seahawks, a team that bullied them a season ago. The Eagles match up much better with them this year than they did a year ago.

1) The Seahawks' experience vs. the Eagles' relative inexperience

Since 2012, the Seahawks have been to the playoffs every year and won at least one playoff game. Their playoff record since 2012:

This season, the Eagles signed a number of players who have won Super Bowls in the past. They are Torrey Smith, LeGarrette Blount, Chris Long, Corey Graham, Will Beatty, and Dannell Ellerbe. While that experience is nice to have in the locker room, it does not compare to a full roster of players used to playing in huge games in prime time.

If the season ended today, the Seahawks would miss the playoffs. Additionally, they lost their last two home games. This is a very experienced team with its metaphorical backs up against the wall. While not as talented as in years past, the Seahawks pose an excellent test for the Eagles.

2) The Eagles' secondary vs. the Seahawks' passing attack

When you think of the Seahawks, you used to think of an old school kind of team that loved to pound the run offensively, and play great defense. Here is where the Seahawks ranked in the run game vs. the pass game during their run of five straight playoff appearances, and into this season.

As you can see, they transformed from a ground-heavy attack into more of a passing attack from 2015 into 2016. That, of course, coincides with running back Marshawn Lynch leaving the team.

"Seattle has transitioned a little bit, five odd years ago it was the Marshawn Lynch, and play defense, and that kind of stuff," said Jim Schwartz. "Now they're one of the top passing attacks in the NFL. They've got good receivers. They've got a great tight end, and they've got a quarterback that can throw it on time, but then he can also create something off schedule."

The Seahawks, like the Eagles, don't have that true "No. 1" alpha dog receiver, but they do have a lot of guys who can make plays, as they have four players with at least 400 receiving yards.

Baldwin is the chain mover, Richardson is the deep threat, and Graham is the red zone stud.

Early this season, this might have been a matchup of concern for the Eagles, but with four cornerbacks playing well, they are better equipped to handle the Seahawks' receivers than observers may have perceived previously.

3) The Eagles' front seven vs. the elusive Russell Wilson

As we've noted previously, while the Eagles have done an absolutely incredible job all season long against opposing running backs, opposing quarterbacks have hurt them on occasion when they have scrambled, though they have cleaned that up in recent weeks. A look at some of the more mobile quarterbacks the Eagles have faced and their rushing numbers against Philly:

While the Eagles would surely prefer not to give up yards on the ground to quarterbacks, they don't seem to mind them picking up yards against them as much as they would an opposing running back. That's because they view quarterback scrambles as opportunities to dish out pain.

"You hit them really hard when they break the line of scrimmage because now they're a running back," said defensive line coach Chris Wilson, when asked how you stop an opposing quarterback from running. "They're going to have those. Any time you're blocking four on five, those opportunities are going to happen, but when the quarterback now breaks the pocket, we want to be clean, but get good solid tackles on the quarterback. They're not running backs, so those are the opportunities where we can get nice clean plays on them."

Wilson is extremely hard to hit, as he gets into his baseball slide quicker than any quarterback in the league.

Schwartz talked at length at how Wilson is not your average scrambling quarterback, via our Matt Mullin.

Wilson is a guy who can beat you by making a bunch of plays on his own, despite imperfect conditions around him, unlike what the Eagles witnessed in Dak Prescott two games ago.

4) The Eagles passing attack vs. the Seahawks' weakened pass defense

The Seahawks are perhaps best known for their "Legion of Boom" secondary. The Legion of Boom, unfortunately for them this season, is missing two of its best guys in CB Richard Sherman and S Kam Chancellor.

Here is what the Seahawks have done to opposing quarterbacks, passer rating-wise, since the start of their consecutive playoff run:

The Seahawks have played two games without Sherman and Chancellor. Matt Ryan was able to effectively throw on the Seahawks D, as he completed 19 of 27 pass attempts for 195 yards, 2 TDs, 0 INTs, and a passer rating of 115.5. In the other game, the Seahawks faced the hapless Niners.

I expect the Eagles to attack the Seahawks' weakened secondary, which now includes old friend Byron Maxwell, who Torrey Smith toasted in the Eagles' preseason game against the Miami Dolphins back in August. 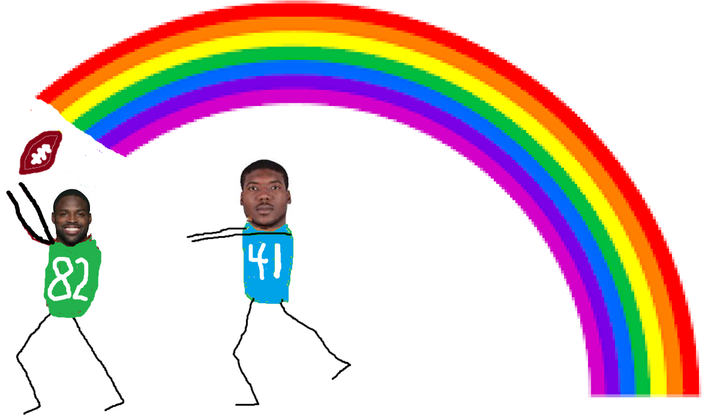 5) The Eagles' rushing attack vs. the Seahawks' rush D

And of course, as always, the Eagles want to run the football. As you might guess based on what we've written above, yes, the Seahawks have been great against the run on defense during their consecutive playoff season run, as they always land in the top 10.

The Eagles have been up to the challenge against other top-ranked rushing defenses. They ran for 101 yards against the third-ranked Panthers, and they steamrolled their way to 197 yards against the fourth-ranked Broncos.

The Seahawks may find it more difficult to pack the box with Sherman and Chancellor out.