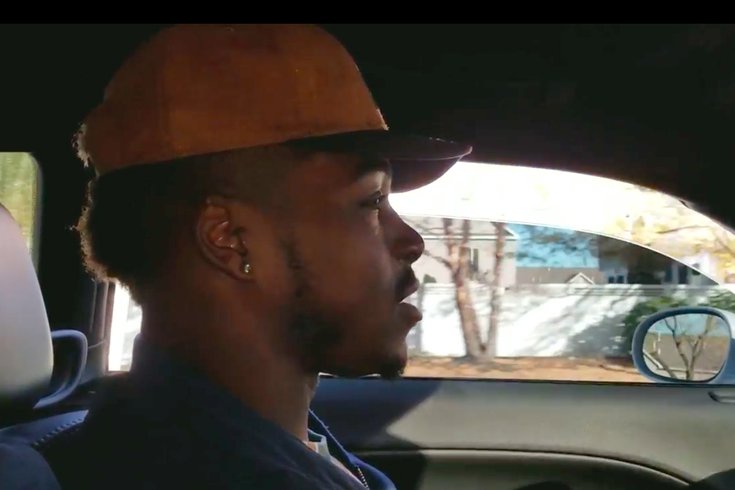 Corey Clement is focused as he and PhillyVoice contributor Joe Santoliquito drive to the Linc for Sunday's game vs. the Bears.

At 8 a.m. Sunday morning there were no discernable signs that the hotel on the outskirts of Philadelphia was currently housing the best football team in the world.

A sneak peek behind the curtain showed a bristle of activity for an early weekend morning. There were layers of security checks, with people sitting behind tables taking names. Three security guards manned the entrance of the ballroom so only recognizable faces could come through, along with hotel patrons.

It's when Corey Clement emerged, walking with a bouncy heel-to-toe step towards the black curtains.

Clement, wearing his favorite lucky tan hat, had an engaging disposition. You couldn't even tell the undrafted Eagles' tailback was about to drive to work.

His pregame edge takes time to build. He carries the fact that 31 other NFL teams passed on him and it's a reason why he carries the ball the way he does – with a purpose to prove them all wrong.

You can see it in the way he runs, with a head full of steam that usually requires multiple tacklers to bring him down.

The 5-foot-10, 220-pound Clement has become a fan favorite, rushing for 259 yards and four touchdowns.

Clement agreed to let PhillyVoice ride with him to work Sunday morning.

On the way, he touched on how Eagles’ running backs coach Duce Staley has been instrumental to his career, how fortunate he feels playing on a Super Bowl-contending team and the chip he plays with after going undrafted. He also speaks of his pride in his Wisconsin Badgers, who are in the hunt for a national championship.

Right now, it couldn’t be a better confluence of football for the former Glassboro High star, who stressed the importance of staying true to who he is and not let the glitz and glamour of the NFL change him.

Here’s part of his journey — in his own words — during the 17-minute drive from the team hotel to Lincoln Financial Field on Sunday morning before the Eagles routed the Bears, 31-3, to improve to 10-1.