Eagles vs. Seahawks: Five matchups to watch when Seattle has the ball 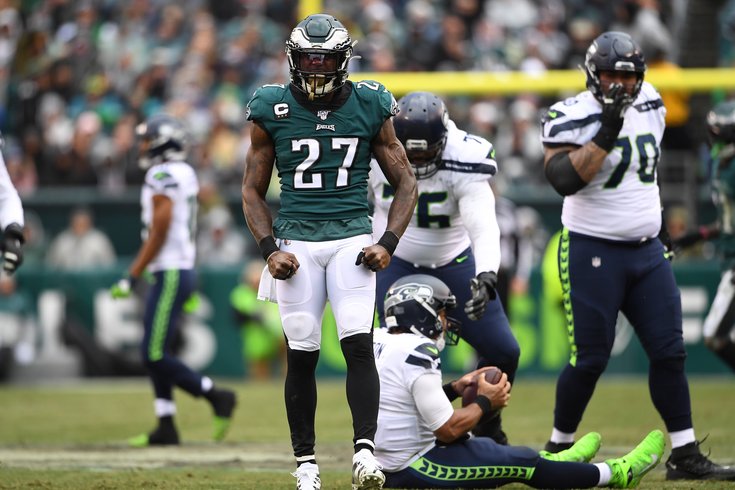 The Eagles blitzed Russell Wilson quite a bit Week 12.

The NFL playoffs are here, and the Philadelphia Eagles will take on a familiar foe in the Seattle Seahawks, a team that has owned them over the years ever since Russell Wilson became their quarterback.

For the playoffs, we'll do five matchups for each side of the ball. We'll start with the "when the Seahawks have it" version.

1) Marshawn Lynch and the Seahawks' rushing attack vs. the Eagles' run defense

The Seahawks are in their comfort zone when they are able to run the ball offensively, even if that's a dumb comfort zone to have when you employ Russell Wilson and a good set of wide receivers. During the regular season, the Seahawks ran it on 46 percent of their offensive plays, which was the sixth-highest run:pass ratio in the NFL.

With Lynch not having played since Week 6 in 2018, there was a pretty good bet that the Seahawks would get away from their rushing attack against the 49ers last Sunday against the Niners, right? Eh, not really. Lynch carried 12 times for 34 yards and a TD, while Homer carried 10 times for 62 yards on a night in which they trailed for almost the entirety of the game.

"They're still a top running team in the NFL," said Jim Schwartz. "I don't know where they finished in the rankings and they've rolled different backs in over the course of the year, started off with Penny then went to Carson and then went back to Penny, and then both of those guys got hurt. They'll get all their guys in there and go. They signed [Seahawks RB] Marshawn [Robert] Turbin last week, so I'm sure they'll -- it looked like they had some scheme stuff where they wanted to get Marshawn Lynch the ball in there.

"They've always been a good running offense, and I think it sets up a lot of their boot game, a lot of their play-action game. We just got to make sure that we're up for that. We gave up a long run last time. It wasn't our best play, but you miss one tackle and they can go the distance. I think all their guys have that ability."

This is the long run Schwartz is referring to:

The Eagles gave up three big runs this season:

Giving up a long run has to be less of a concern than giving up a pass play of 40+ yards. The Eagles gave up 15 of those in 2019, but we'll get to that shortly.

Since 2015, Lynch has just two runs of 40+ yards. He no longer has that kind of breakaway ability, if he really ever did. Schwartz likened Lynch to Ezekiel Elliott.

"He's such a strong running back," Schwartz said. "He's a contact runner; he doesn't need a hole to be able to gain yards; he's a hard guy to bring down one-on-one. A lot of those same things I said about Ezekiel Elliott, Marshawn Lynch was doing that long before Ezekiel Elliott was in the NFL. And it wasn't just run. They had him involved in the pass game. I don't know if they got any passes to him, but they were in the passing game with him. So if he's in the game, we're going to know; 24 is in the game, we're going to be ready for him."

Personally, I believe the Seahawks would be better served giving Homer more opportunities. Homer is a rookie back with fresh legs (only 18 carries this season), who played well last Sunday night against the 49ers, and has some explosive athletic measurables:

Of course, the Eagles are very good at stopping the run. They were third in the NFL in rushing yards allowed per game, at 90.1, despite facing quality backs all season long, like Elliott (twice), Saquon Barkley (twice), Dalvin Cook, Aaron Jones, Le'Veon Bell, etc.

Whenever the Seahawks run, I would chalk that up as a win for the Eagles.

2) The Eagles' edge rushers vs. the Seahawks' offensive tackles

Against the Giants last Sunday, the Eagles' edge rushers really came alive, with Derek Barnett and Brandon Graham both definitively winning their matchups, especially in the second half. Barnett in particular had his inside-outside game going, as he had two sacks, and several other plays in which he smoked Giants LT Nate Solder, but the ball just came out early, like this:

They should have an advantage this Sunday against a pair of shaky Seahawks offensive tackles in LT George Fant and RT Germain Ifedi. While there are reports that there is a slim possibility that the Seahawks' regular starting LT Duane Brown will play, that remains unlikely. Whether it's Fant or a "not healthy Brown," the Eagles should have a decided advantage on the edges.

This would be a good time for Barnett to have a huge game.

"He's such a tough guy, so tenacious," said Schwartz. "He's not the biggest guy in the world, but he plays physical football. He hustles. You can check off about every box when it comes to defensive end play and he's done those for us. We're going to need him this time. Our pass rush is going to have a big challenge ahead of us. Not just stopping the run and not just attacking the quarterback in the pocket, being able to make plays out of the pocket.

"If you think you're out of the rush, you're not, because the quarterback has this ability to extend plays for a long time. So, it'll reward guys that work hard and hustle throughout the play, and Derek does that."

3) The Eagles' DTs vs. the Seahawks' interior offensive line

The interior of the Seahawks' offensive line will look like this on Sunday:

None of those three guys are ideal starters, but the guy who should really make Seahawks fans nervous is the center, Hunt. After the Seahawks' regular starting center Justin Britt went down with a torn ACL, Hunt has had to fill in. He is thought of as a good technician, but at 6'2, 299, with extremely short 30¼” T-Rex arms, he is physically overmatched week in and week out.

The Seahawks will game plan to try to contain Fletcher Cox, but with Timmy Jernigan "on the rise" of late, the Eagles' DTs should have an advantage here.

4) The Eagles' defensive backs vs. Tyler Lockett and DK Metcalf

In the Eagles' first matchup against the Seahawks, they held Seattle to just 17 points, which is great, however, the Seahawks left a bunch of points on the field. You can see the Seahawks' unforced errors in this thread on Twitter (I put them there so as not to slow down the page here with a lot of gifs):

The Seahawks missed a bunch of big plays against the Eagles Week 12. Can't count on them to have this many unforced errors on Sunday. Thread:

The Eagles cannot expect the Seahawks to squander so many opportunities this Sunday.

Lockett and Metcalf combined for 140 catches for 1957 yards and 15 TDs this season:

Lockett did his damage on 110 targets, meaning that he caught 74.5 percent of his targets. Metcalf caught just 58 percent of his.

It is unknown at this time which of the Eagles' corners will and will not be ready to go for Sunday, but the 5'10 Lockett is a better matchup for guys like Avonte Maddox, Sidney Jones, and Cre'Von LeBlanc, while Jalen Mills and Ronald Darby have the physicality to match up with Metcalf. But do they have the speed?

5) And then, of course, there's Wilson vs. Schwartz

When the Eagles faced the Seahawks Week 12, Jim Schwartz was effusive in his praise of Wilson. Let's revisit his quote:

But he can also be as good as anybody in the league when it comes to just dropping back and throwing it. He's very talented that way, and he can scramble not just for 1st downs, but he can scramble for big plays down the field. Just an excellent competitor, and it's a great challenge this week for us."

The Eagles did as good a job against Wilson Week 12 as they ever have. They sacked him 6 times and held him to 13 of 25 passing for 200 yards, a TD, and an INT, though as noted above, Seattle did leave some plays on the field.

The Eagles blitzed Wilson (unofficially) 14 times on 31 pass plays Week 12, way more than Schwartz is typically comfortable with. It will be interesting to see if he dials the heat up like that again on Sunday. My guess is yes.