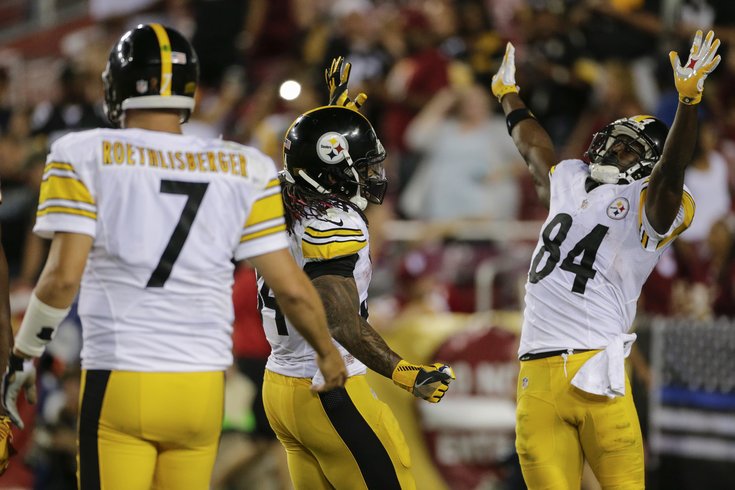 The Philadelphia Eagles are 2-0, with their two wins being diminished by many since their first two opponents -- the Cleveland Browns and Chicago Bears -- aren't good teams. Welp... Now the Eagles will face a Pittsburgh Steelers team that has been to the playoffs eight times, had three Super Bowl appearances, and won two Super Bowls since they drafted Ben Roethlisberger in 2004.

1) The Eagles' secondary against Antonio Brown and the gang

Antonio Brown is awesome. Over the last three seasons, Brown has staggering stats -- 375 catches for 5031 yards and 31 TDs. To put that in perspective, if you took just the last 3 seasons, Brown's 375 catches would be 4th on the Eagles' all-time receiving list behind Harold Carmichael (589), Pete Retzlaff (452), and Brian Westbrook (426). For a guy who is 5'10, 181, he is as dominant a receiver as you'll find in the NFL, despite a lack of prototypical measurements.

Brown could pose all kinds of problems for the Eagles' secondary, which will likely only have three cornerbacks active on game day, as Leodis McKelvin is expected to remain out.

While the Eagles will always have to be aware of where Brown lines up, the Steelers have other weapons in their passing game as well, as Eagles defensive coordinator Jim Schwartz pointed out on Thursday.

"Yeah, we know what number he wears, so we won’t have a problem finding him," said Schwartz of Brown. "But it's not just him. I mean, they’ve got a track meet of wide receivers. They've got some guys that can fly and that can take the top of a defense."

"17 [WR Eli Rogers] is a really shifty guy in the slot. Their tight end [Jesse James] is big. They've got a couple different tight ends they can work in there. A running back [DeAngelo Williams] that's leading the NFL in rushing and a future Hall of Fame quarterback.

This could be a game where Malcolm Jenkins and Rodney McLeod have to prove that they are indeed among the top safety tandems in the NFL.

2) Carson Wentz against yet another inexperienced pass rush

The Steelers are similarly inexperienced, but not to the degree of the Browns and Bears. Here are the career sack numbers for the Steelers' front seven starters:

To put that in perspective, there are 10 active individual players with more than 85 sacks, on their own, including Trent Cole, for example, who has 87.5. (To note, 38 year old James Harrison is still on the team, but he does not start and is nowhere near the same player he once was).

In their first two games in 2016, the Steelers have one sack. While they are better than the Browns and Bears defensively, the Steelers are yet another defense that lacks a dominant pass rush.

3) The Eagles' ground game vs the Steelers' run defense

While the Steelers don't have a particularly impressive pass rush these days, they are great at the dirty work. When asked what the strength of the Steelers' defense is, offensive coordinator Frank Reich answered, "Stopping the run."

I could keep going, but the beginning of the Roethlisberger era seems like a reasonable enough cutoff point to confirm Reich's statement. So are they still good at stopping the run in 2016? Well, they've allowed just 50.5 rushing yards per game so far, sooooooo, yeah, probably.

Meanwhile, the Eagles' rushing attack has been 'meh.'

"We ran for 133 yards in the first game and 100 in the last game," said Reich. "So, that’s okay. I mean, that’s acceptable. It needs to be better and we expect it to be better, but that's certainly an acceptable range. We would like to have a few more explosive runs and keep it in phase, but I think we are on our way to that."

Remember that time in 2008 when the Eagles sacked Roethlisberger like 30 times, knocking him out of the game, and just completely manhandling the Steelers' offense? That is the all-time favorite game of a lot of Eagles diehards who love defense.

While the Eagles aren't going to generate that kind of pressure on Big Ben on Sunday, it is imperative that they hit him early and often. The Eagles have the horses along their front four to do it, and it's probably the only way they're going to stifle this Pittsburgh offense.

The Steelers are without star running back Le'Veon Bell, who was suspended for four games for violating the league's substance abuse policy, which was later reduced to a three-game suspension. And yet, the Steelers still have the NFL's leading rushing in DeAngelo Williams.

"They don't ask for a birth certificate before the game," said Schwartz. "They don't give you 9 yards [to gain a first down] if you are over 30. You’ve still got to get 10. He's a patient runner, he's compact and he's strong. He can test every area of your run gaps.

"If we're nosey or if we get out of our gaps, he's a guy that can make you pay. A lot of that comes from his experience. So I think that's served him well. He's been in the league for a while. He understands the run game and it's not just where the ball is supposed to go. He can test every gap and we have to play sound defense."

Certainly, a lot of Williams' success is attributable to the Steelers' high-octane passing offense, but the Steelers' run game can hurt opposing defenses just as badly if you over-commit to stopping the pass.