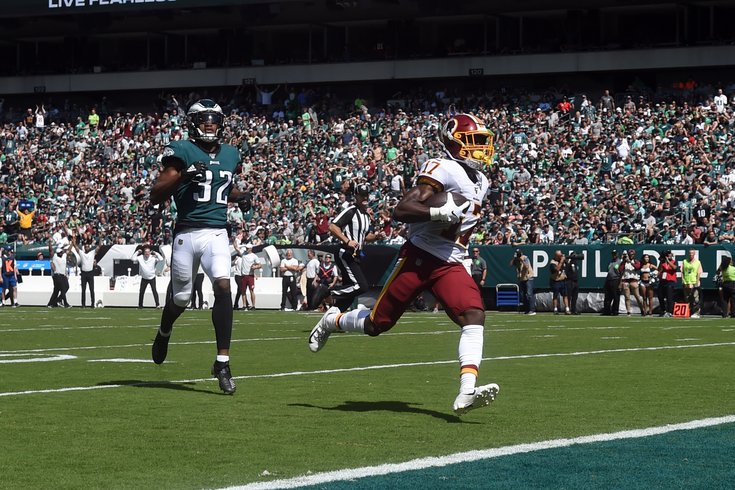 Above all else, Jim Schwartz and the Eagles defense cannot allow Washington WR Terry McLaurin to get behind them for big plays.

The Philadelphia Eagles will head south to beautiful, luxurious Landover, Maryland this Sunday to take on the undermanned 3-10 Washington team. Here are our five matchups to watch.

Two Sundays ago in Miami, it was crystal clear that the one guy the Eagles could not let beat them with big plays down the field was DeVante Parker. And then he did, repeatedly, going off for 7 catches, 159 yards, and 2 TDs, and the Birds suffered an embarrassing loss as a result.

Memo to Jim Schwartz: This Sunday, give whatever extra attention you need to give to rookie wide receiver Terry McLaurin, so that he doesn't single-handedly beat your defense. This is him, to the right. See him? That's what he looks like. He's number 17. He's waving to you. Make sure your secondary covers that guy. Jim, no! Stop looking at Adrian Peterson! BAD! He doesn't matter. Seriously, cover No. 17. He's what matters. Got it? OK, good.

As I'm sure you all remember, McLaurin went off against the Eagles Week 1, when he had 5 catches on 125 yards and a TD, including this 70-yard bomb:

McLaurin also should have had another long TD catch, but Case Keenum missed him.

Tight ends Jordan Reed and Vernon Davis are both on IR, as is RB Derrius Guice. Richardson has been hampered with a hamstring injury, and will not be 100 percent if he plays, which is in doubt.

McLaurin is so very obviously the guy the Eagles need to shut down, and it's not even close. I'm serious, Jim. Just cover 17. He's all they have.

According to the NFL's NextGen stats, rookie QB Dwayne Haskins is holding onto the ball for an average of 2.91 seconds per pass attempt, which is the second-slowest release time in the league. Pass rushing opportunities should be a-plenty.

Washington's offensive line as a whole isn't good, but the left side is particularly vulnerable, with 36-year-old Donald Penn at LT, and former Giants bust Ereck Flowers at LG.

On the right side, Brandon Graham has had success in the past against RT Morgan Moses, and Fletcher Cox has had his share of good moments against Washington's best offensive lineman, Brandon Scherff.

In 7 games (5 starts), Haskins has thrown 7 INTs and he has fumbled 5 times, through he has been fortunate to only lose 1. He has been sacked 26 times on only 160 pass attempts. For context, you know how a lot of folks gripe about Carson Wentz not throwing the ball away, or holding onto it too long at times? Well, he's been sacked 33 times, but on more than triple the number of pass attempts (484).

The Eagles need to pressure Haskins into bad decisions.

The cornerback that the Eagles are likely to target this week is Moreau, a third-year corner who is now starting in place of the benched Josh Norman. With Washington's season over, and Norman certain not to return, it makes sense for Washington to get Moreau reps to see what he can do.

Fabian Moreau is still looking around for Stefon Diggs 😂pic.twitter.com/gfXvKsmuh3

While Moreau does have 3 picks in the last 3 games, the bet here is that the Eagles will still choose him to attack, though I'm not sure exactly with whom, ha.

Of course, because the Eagles' wide receiving corps are so depleted, the expectation here is that they will try to run the ball, which they were able to do at times last week with Boston Scott and Miles Sanders against what is actually a decent Giants run defense.

Washington is allowing 134.8 yards per game on the ground (27th in the NFL), which is obviously bad, although they face more rushing attempts than most because they've been behind in games so often this season. They are allowing 4.34 yards per carry, which is 20th in the league.

As of Wednesday, the weather forecast in Landover for Sunday is 50 degrees and sunny, which is good passing weather, but Doug Pederson cannot forget that he doesn't have any receivers, and should probably run it quite a bit, if possible.

With Lane Johnson almost certain to miss this matchup with an ankle injury, Pederson indicated that Vaitai would get the start at RT. Luckily for the Eagles, edge rusher Ryan Kerrigan, who has killed Vaitai in the past, will not play either.

Filling in for Kerrigan will be Ryan Anderson, a 2017 second-round pick who has been disappointing so far, but had a sack/strip/recovery trifecta against Aaron Rodgers last Sunday.

The Eagles need a good game from Big V.