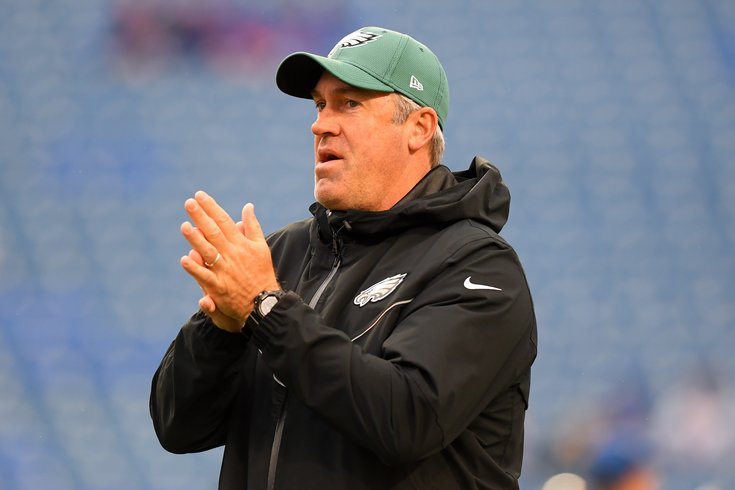 Here's where people around the country have the Birds ranked after the 14th week of the 2019 regular season:

The bulk of the damage inflicted upon Philadelphia's defense happened over the first half of the season, which was somewhat expected as key contributors made their way back from injury. It was supposed to be offset by a high-powered offense that never materialized. The Eagles have been downright mediocre on that side of the ball, as evidenced by their No. 16 ranking in points per game (22.8) entering Week 14.

#JimmySays: What happened to offense in the NFL, league-wide, that the Eagles' offense is even average?

Who knows what finally woke up the Eagles? In the first half, Eli Manning -- with the smell of mothballs clinging to his uniform -- carved up the Eagles (OK, Darius Slayton carved up Ronald Darby) for two touchdowns. The Eagles jogged off the field trailing 17-3 as a chorus of boos rained down upon the home team. But luckily for Philly, the alarm activated in the second half. Manning and the Giants' offense regressed into nothingness, while Carson Wentz led the Eagles on three touchdown drives, two in regulation and a game-winner in overtime. Credit the Eagles for their resourcefulness: By overtime, they were down to just one healthy wide receiver -- the immortal Greg Ward Jr. But they got contributions from unlikely sources (hello, Boston Scott) and the veteran pairing of Wentz and Zach Ertz handled the hero work. From down and out to first place in one night. Strange times.

#JimmySays: Well, sort of first place. Also, how did Ertz not get triple-teamed down the stretch in that game?

That was not a pretty game Monday night against the Giants, but give Carson Wentz and his teammates credit for battling after a rough first half. And hey, they’re still in the NFC East so they’re still alive.

#JimmySays: I haven't heard boos as loud as the ones that ended the first half since the 2015 season.

When JJ Arcega-Whiteside limped off the field in overtime, the Eagles had one remaining receiver on their roster — Greg Ward. An unreal slate of receiver injuries had already limited Doug Pederson to calling a bunch of stuff out of three-tight end sets and using running backs Miles Sanders and Boston Scott in the passing game. In the end, after a highly uneven performance in regulation, the Eagles were able to come back from a 17-3 deficit to the Giants to pull the game out in a 23-17 final when Carson Wentz hit tight end Zach Ertz on a two-yard touchdown pass with 5:13 left in regulation, giving Philly a decent chance of taking the NFC East if they can beat the Cowboys in Week 16 as part of a win-out strategy. It’s not been pretty for the Eagles this season, and between their receiver group and a highly suspect secondary, they’re looking primed to get waxed by any of the NFC’s better teams. But this was enough to keep them alive for another week.

#JimmySays: It's funny to me that the Eagles (rightfully) get talked about as little more than a speed bump for whoever they play in the first round of the playoffs, should they make it there, but somehow the Cowboys don't, even though they are 3-7 in their last 10 games.

The Eagles can erase all their frustrations from a limited offense and mostly bad pass defense by playing well in the final three games of the season to rip the division away from the Cowboys, who are trying their best to hand it to them.

#JimmySays: If it's being handed to them, they don't really have to rip it away, right?

It wasn’t elegant Monday night against the Giants. It took OT. The injuries continued to pile up. The Eagles trailed by 14 points at halftime and the fans booed. But Carson Wentz’s tying and winning TD passes to Zach Ertz got the Eagles a win they had to have.

#JimmySays: Ya know, the injuries really weren't that bad heading into that matchup. Now they certainly are.