Einstein orthopedic surgeon goes to the mat for young athletes 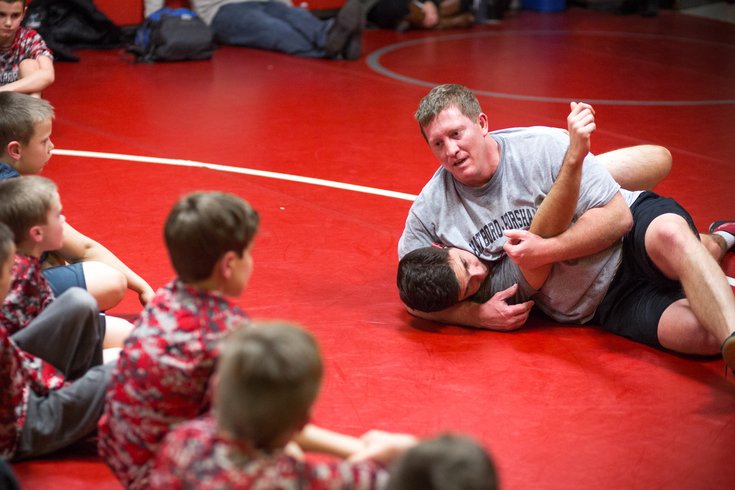 Wrestling has been in Brett Sweitzer’s blood since he was young, and for him the sport is about so much more than just taking down an opponent.

As an orthopedic surgeon affiliated with Einstein Healthcare Network, and a husband and father of four, lessons learned on the mat have influenced his life in so many ways.

He first started competing in grade school in the Harrisburg area and then continued to hit the mat in middle school and high school when his family moved to Boulder, Colorado. And he wrestled his first year at Brown University, before refocusing on academics and pre-medicine.

His passion for the sport never left him though. He wrestled again at an open tournament his first year at Temple University Medical School and today he coaches in the Hatboro-Horsham Warriors program in Horsham, Montgomery County, where he lives.

Sweitzer's two sons, now 8 and 10, were instrumental in getting him back into the sport he loves so much. When the boys started to show some interest in wrestling about five years ago, after watching a Hatboro-Horsham Warriors meet, Sweitzer had them go out for the team. A few practices later, he was a coach and has been ever since.

“Once my sons were interested and I had the chance to coach, I took advantage of it," he said. "Besides the coaching, it is actually great exercise for me. I get in there with the kids and do everything they are doing.”

The Warriors league goes from October to March, but Sweitzer has kids that are practicing and competing almost year-round. Practices during the week prepare the athletes for weekend meets and tournaments.

“It keeps us busy,” he said. “With four kids who are very active in sports, I guess my wife and I thrive on chaos ... Often times I am hurrying home from the office or the ER, grabbing a quick bite to eat and off to practice we go.”

Sweitzer, 40, says he could talk about wrestling all day long, and loves how in many ways it is both an individual and team sport.

“It is a very unique sport in that you are out there one-on-one. No one else can help you so it is extremely satisfying when you win. However, at the same time I always tell my kids that it is the ultimate team sport because their wrestling teammates are, by far, their best friends. They are always together, working so hard and making each other better in practice.” 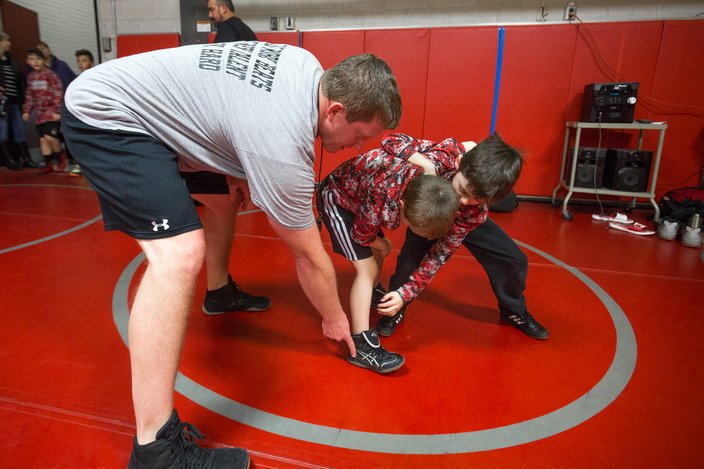 Dr. Brett Sweitzer, an orthopedic surgeon affiliated with the Einstein Healthcare Network, teaches the ankle pick move during wrestling practice at Keith Valley Middle School in Horsham. “It teaches mental toughness,” he says. “There are so many lessons to learn from wrestling.”

For Sweitzer, wrestling played a huge part in building important traits that he uses both as a physician and a parent.

“It teaches you how to deal with failure, how to push yourself further than you thought you could be pushed, how to respect your adversaries, and how to value exercise and eating right," he said. "It teaches mental toughness. There are so many lessons to learn from wrestling.”

And now that he is a coach, he is instilling these qualities in his team.

“A lot of what we are focusing on with the youth program is exercise and pushing themselves a little bit, so we do a lot of pushups and planks and walking on your hands, agility type of stuff that is not specific to wrestling but is good for building strength and coordination,” he said.

In his competing days, he was always a pinner so he loves to teach the kids different pinning combinations. He added that the half-nelson, a simple but effective move, is usually one of the first they learn and one of his favorites.

“You just have to break the moves down in language they understand, and take it one step at a time. You don’t want them to learn bad technique. Safety is always number one, then having fun and the wrestling kind of comes after that.”

Sweitzer added that while wrestling has taught him valuable lessons he uses every day as an orthopedic surgeon, his medical training has also helped him with coaching.

“One of my mentors always said there are three keys to success in life: good communication, attention to detail, and effective multitasking," he said. "I have tried to embody each of these things at work, at home with my wife and kids, and when coaching.”