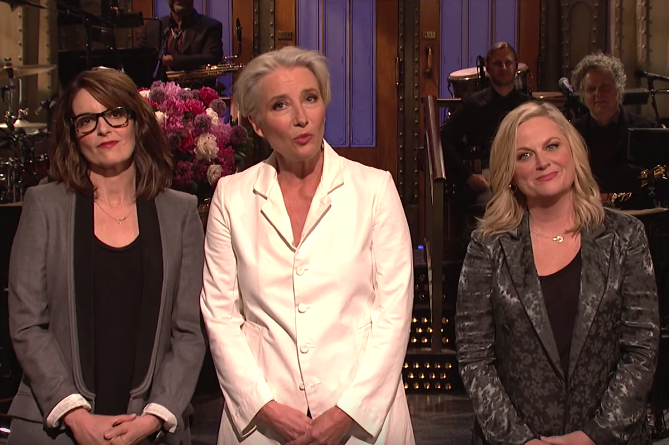 Thompson greeted the SNL audience on Saturday by thanking her “husband” of 16 years Kenan Thompson before leading into language lesson on mother code.

Sometimes it can be hard to read in between the lines of what a mother is saying, so the actress brought out Amy Poehler and Philly native Tina Fey, who were promoting their new Netflix film, “Wine Country," to decode mom speak.

The three of them delivered the jokes in three parts. Thompson noted, "When she says," before Fey jumped in with a soft voice, "Can we just not talk about politics?" Poehler then noted what the mom actually means by making that statement is, "Please don't ruin Joe Biden for me. He's what I picture."

But Thompson noted that sometimes what a mother means can change depending on where the mom is from, including Philadelphia. "For example if your mum asks, 'What are you doing for Mother's Day?' and she's from Philadelphia, she means..." Then Fey, in with a thick Philly accent, says, "Youse better come down to the shore for Mother's Day brunch. Pop-pop's makin' mimosas."

But if you thought drinking mimosas with your mom by the shore was the only Philly and New Jersey concern on this week's "SNL," you'd be mistaken. Colin Jost made a joke in reference to a Philly Phanatic beatdown on Weekend Update.

Jost discussed that New Jersey governor Phil Murphy ordered to have the Mississippi state flag removed from Liberty State Park due to the confederate symbol on the flag. Jost notes, "And to better reflect New Jersey's values they're replacing it with a flag of Tony Soprano curb-stomping the Philly Phanatic." Ouch, you guys, ouch.