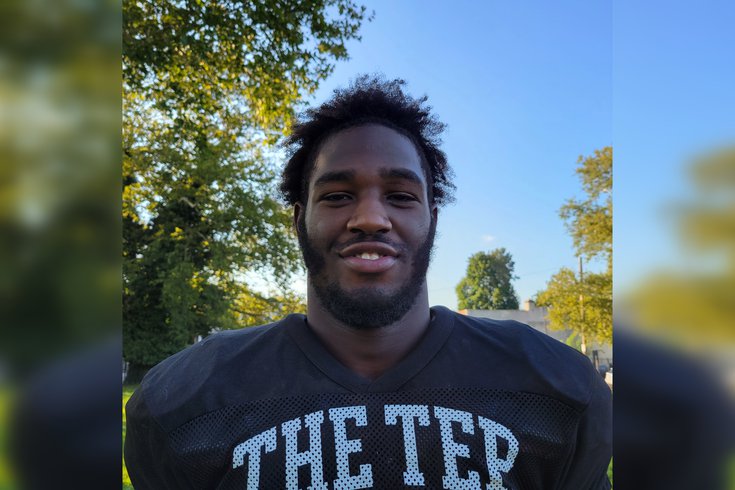 A long, lean arm rose from the vocal clatter in the end zone on a sweaty, early-September Saturday afternoon. The extended index finger at the end bent in an unusual direction—back at the owner, Enai White.

Imhotep Charter had just suffered a crushing 13-8 defeat to Catholic League force La Salle on September 11 and White, the Panthers’ sterling senior 6-foot-5, 230-pound defensive end, stood and squashed the mini-tsunami of finger-pointing and laid blame on himself.

A lot of colleges are also looking at Enai White.

You may not have heard of him, but chances are you will—very soon. It’s not too often the honchos of college football come calling on a local player. They have for White, considered the nation’s No. 1 edge rusher who is considering Alabama, Georgia, Ohio State and Texas A&M.

White’s first love was football, until he reached third grade and discovered something—he was pretty good at basketball, too. From sixth grade to his freshman year of high school, White thought his future was going to be on a basketball court, gaining attention playing for Team Final on the AAU circuit.

Because he was so much bigger than everyone his age, he played up until seventh grade, before reclassifying and playing in his own age group. He would usually draw stares when he went into a new classroom, because he couldn’t fit into the desk. Everyone would tease him, asking if he failed 10 times. In eighth grade, White had to sit at a teacher’s desk since his knees would bang up against the bottom of the normal-sized desks.

His mother, Adrienne Ellington, wanted him to get out of North Philly, so she sent him to an elite private boarding school, the Pennington School, in Pennington, N.J. There, White was spotted by the football coach in the halls, and he urged White to begin playing football again.

By December of his freshman year, White was back home to support his mother.

"My mother wanted me to stay at Pennington, but I needed to come home and support my mom so I enrolled at Imhotep," White recalled. "I started playing at Imhotep my sophomore year."

His sophomore season was sidetracked by a concussion. His junior year was wiped out due to COVID-19. The Philadelphia Public League opted to play in the spring of 2021, but White broke two ribs in practice and missed almost the whole spring season to collect film.

Colleges came calling. His length and athleticism make him a high school Jevon Kearse. He’s disruptive, covers a lot of space, and is a nightmare for any tackle one-on-one.

Still, White would hear the whispers that have grown louder—how he’s overrated, how he’s not worth the hype.

"I’ve been around Enai since he was 8, and coached him with the Northwest Raiders," said Cy Woodland, Imhotep’s associate head coach. "Enai has matured a lot through the years. He’s learned to take ownership for the things he does, and he’s becoming a great young man. I saw Enai being rated No. 1 in the country, but I already knew he had a crazy upside with the ability to play at a high level.

"He’s very humble and the other thing about Enai is he lives in the moment. He doesn’t get caught up in the hype. He has a lot of drive and that comes from his mom, who’s raised him. She’s worked her whole life for him. It’s why he grinds the way he does. He wants to eventually take care of her and his family."

In the Panthers’ season opener, against Pennsylvania powerhouse Pittsburgh Central Catholic, White was being razzed by the Central Catholic fans. His operative word is “Kill.” He’ll repeat it in his head ad nauseam before games, ‘kill the noise, kill the quarterback, kill anything in my way.’

"We’ll see him playing on Saturdays on national TV, and then we’re going to see him on Sundays. That’s from the demands he puts on himself." —Imhotep coach Devon Johnson

There was a whole section of Central Catholic fans yelling “overrated” at White. He didn’t say anything back. He just came up with the game-changing play, a critical sack causing a late fumble in the Panthers’ 12-6 victory on Aug. 27.

Panthers coach Devon Johnson said White’s leadership abilities have risen over the last year. His ability to play the run is a strength, making him a much more versatile player.

"You wouldn’t think someone like Enai, with everything he has going for him, plays with a big chip on his shoulder," Johnson said. "Enai had a lot of early success and then the overrated stuff started coming up, and then he was hurt in practice last spring. So, he had no junior film, which added more of a chip on his shoulder, with the attitude that he has to prove himself.

"As a team, everywhere we used to go, Enai would get the overrated chants. Enai loves that. He loves those hostile environments. Everyone saw that in the Pittsburgh Central Catholic game. He’s 18 and loves facing challenges.

"The other thing, too, with Enai is that he is a great kid. We’ll see him playing on Saturdays on national TV, and then we’re going to see him on Sundays. That’s from the demands he puts on himself."

By the way, the game in which White blamed himself for losing against La Salle, he had 12 tackles and three tackles for losses.