A total solar eclipse will travel across the contiguous United States on Monday, Aug. 21, for the first time since 1918. For mere minutes in certain areas, the sun will be completely blocked out by the moon.

In parts of the country not located along the narrow path where this celestial event will be viewable in totality – like Philadelphia, the surrounding suburbs and South Jersey – the sun will only be partially covered Monday afternoon.

But that doesn't mean you can't still enjoy the eclipse. Which is why I'm here to help.

Here's everything you need to know about the upcoming solar eclipse.

What are we going to see in Philly?

The solar eclipse in Philly begins around 1:20 p.m. and ends at 4 p.m., but it will reach maximum coverage at 2:44 p.m. Here's the bad news: Philadelphia's not in the path of totality — or the area in which the sun will be completely covered by the moon. So we're only getting a partial eclipse.

About 80 percent of the sun will be covered during the peak in Philly, according to Derrick Pitts, chief astronomer at The Franklin Institute.

That remaining 20 percent is still pretty bright, so if you're not actively looking for the eclipse, it'll probably just seem like a large group of clouds passed by.

"There won't be very much change in illumination," Pitts told PhillyVoice. "We should not expect any darkening."

Pitts stressed, however, that this is still going to be something worth witnessing, even though we're not in the path of totality.

"You can still have an authentic science experience with this," he said. "This is an instance in which you can actually see some of the celestial objects in the sky moving."

So, what exactly are we going to see?

"What we're going to see is this big object slide across the sun and cover most of it," Pitts said.

Wait, what exactly is a solar eclipse again?

For this, let's defer to NASA, whom we can safely call experts on space-related subjects:

Sometimes when the moon orbits Earth, it moves between the sun and Earth. When this happens, the moon blocks the light of the sun from reaching Earth. This causes an eclipse of the sun, or solar eclipse. During a solar eclipse, the moon casts a shadow onto Earth.

Do you have videos of past solar eclipses?

Of course. Take a look:

So, where can we actually see a total solar eclipse?

The aforementioned path of totality (which, yes, sounds like something villainous out of a science fiction movie), starts in Oregon and cuts southeast across the country, making its last land-locked stop in South Carolina. The path's route can be seen in the shaded black line in the map from NASA below. 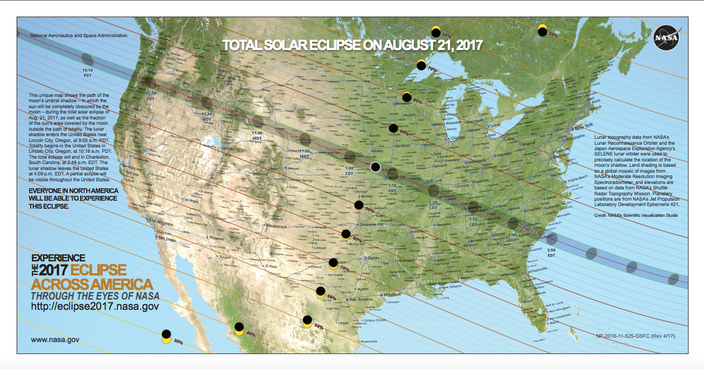 This map from NASA shows the path of totality for the solar eclipse that will cross the United States on Aug. 21.

If you're really thinking about traveling to a place in the path of totality for the eclipse, the closest major city to the Philly area appears to be Columbia, South Carolina, which is about a 10-hour drive.

Totality will descend on Columbia at 2:41 p.m. and will last two and a half minutes. According to local newspaper The State, about 600,000 people are expected in the area for the eclipse, which may cause lots of headaches for local residents.

If you actually plan on taking an extended weekend in South Carolina for the eclipse, or just Monday for the main event, you can find a list of local preview/viewing events from The State here.

Do I need to wear eye protection?

Yes, you absolutely do. Pitts said that during a partial eclipse, like the one in Philly, you need to wear proper eye protection during the entire event.

During a total eclipse, you can take off the protection during totality, however, you should put it back on 30 seconds before full coverage ends. You should never look directly at the sun, and during totality, your eyes become dilated because of the darkness, making them even more vulnerable once the sun reappears.

Pitts said The Franklin Institute sold out of its initial shipment of eyeglasses for the event but is expecting another delivery of them later this week. We'll update this article once we find out if they're available again.

NASA is reportedly worried about scammer glasses, or protection that's not equipped for solar viewing being sold as if it is. Rick Fienberg, an astronomer with the American Astronomical Society, recently explained to NPR that solar glasses are a thousand times darker than normal sunglasses.

The American Astronomical Society has put together a list of legitimate sellers of solar glasses, which you can browse through here. You can find out how to safely watch the eclipse by filtering binoculars or a telescope here.

Have people ever freaked out about a solar eclipse?

Yes. The most recent wide scale example may be the 1976 solar eclipse, in which Australian optometrists scared the crap out of Melbourne residents by telling them there was no safe way to view the event other than on television.

Glenn Schneider, an astronomer who has compiled newspaper clippings of the fear campaign on his website, explained what happened to The Washington Post:

The Australian Optometrical Association, fearful that the eclipse would singe Aussie eyes, created dramatic posters and tucked cautionary leaflets into newspapers. “On every street corner you’d encounter one of these warnings about the solar eclipse,” Schneider said. “I’ve never encountered that anywhere else.” (Schneider, a self-described umbraphile since age 14, has been in the path of 33 total solar eclipses; he’ll notch another when he views Aug. 21’s Great American Eclipse from Oregon.)

On his website, Schneider has collected Melbourne newspaper clippings and the city’s alarmist paraphernalia. “It is DANGEROUS to look at the sun through any kind of filter. … Watch the eclipse on television,” the posters said. “This is the only safe way to see the eclipse.”

One optometrist told a local newspaper that parents ought to lock children inside to avoid the temptation of staring into the eclipse. Another cited 170 cases of “eclipse blindness” from a partial Australian eclipse two decades earlier.

Those warnings, of course, were not true. But as mentioned before, you should still wear proper eye protection.

Is there a terrible Bonnie Tyler parody video about the upcoming eclipse?

As with any phenomenon that happens up above, of course. National Geographic noted many cultures — both ancient and current — believed a number of different things about eclipses. Vikings thought it was sky wolves chasing the sun. In Vietnam, it is believed a frog or a toad eats the sun. An indigenous tribe in Western Canada believes it's the mouth of heaven consuming the sun or the moon.

Other myths still persist on a more widespread basis. Quartz compiled some of those beliefs, such as eclipses are bad for babies in the womb or can cause blindness. Another myth in India is that it causes food to go bad. In all those cases, the belief has either been disproved or there's no science to support it.

When was the last solar eclipse visible in Philly, and when is the next one coming?

In 2000, 94 percent of the sun was covered in Philly during a partial eclipse. That's pretty significant, Pitts noted, but not the 100 percent needed for a total eclipse.

The next time Philly will see a total solar eclipse will be Monday, May 1, 2079. Feel free to bookmark this page 62 years in advance for when that day rolls around.