Everything you need to know about the Broad Street Run

Essential information for spectators and runners 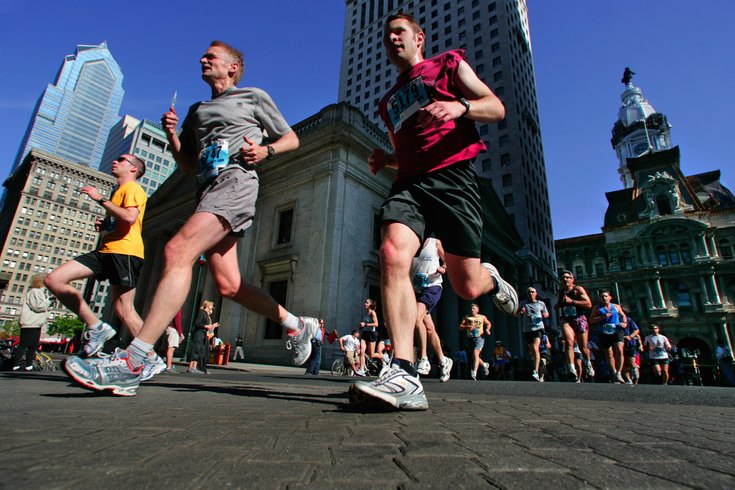 On Sunday morning, about 40,000 runners will trek 10 miles through the heart of Philadelphia for the annual Blue Cross Broad Street Run. Whether you're participating, want to watch or are trying to avoid the whole thing, here's what you need to know:

Sunday, May 1. The start time for the first corral – the race's fastest runners – is 8 a.m. The remaining seven corrals will start on intervals after that. Corral assignments are based on expected finish time and were emailed to runners this week. All runners should be in their proper corrals by 7:40 a.m.

The race begins at the Central High School Athletic Field at Somerville Avenue and Broad Street (duh!), with the finish line at The Navy Yard in South Philly.

Can I still register to run?

What if I already registered?

Can you show me a map that's just a long straight line?

Of course. Here's the route down Broad: 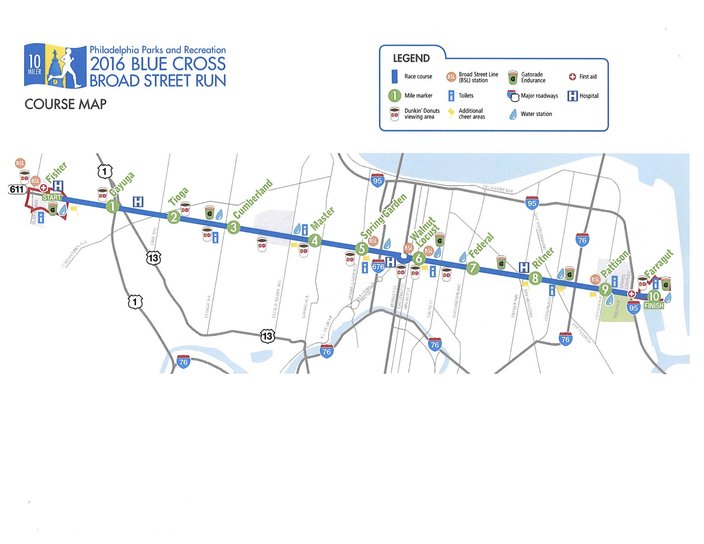 Here is the route for the 2016 Blue Cross Broad Street Run.

Organizers also have provided more detailed maps of the areas around the start and finish lines.

If you’re registered to run in the race, you get a free ride (!) on the Broad Street Line to the starting line until 9 a.m. The starting location at Central High is between the Olney Transportation Center and Logan Stations. You'll have to display your official bib number to get on the train for free.

Also, several buses will be rerouted because of the run.

Where do I park?

Runners can park for free at the Stadium Complex in South Philly and take the Broad Street Line (again, also free for runners) down the starting line. Shuttle buses will take runners from The Navy Yard back to the parking lots after the race.

What roads will be closed?

All vehicles must be moved off Broad Street by midnight Saturday. If police send out more detailed road closure information, we'll update this section.

Where can I watch?

Theoretically, anywhere you can get an open view from along Broad Street is a place to watch. But the organizers do suggest a number of places for an ideal viewing experience. They are:

• The start area near Broad and Fisher streets

• Broad and Walnut streets outside The Bellevue

• South Broad Street along the Avenue of the Arts

• Broad and Pattison at the Sports Complex

Can I track the person I’m there to watch?

Can I watch it on TV?

Yes. NBC10 and Telemundo will broadcast the entire race for the second straight year.

It will be wet and chilly when the first runners step off. Here is the updated forecast from the National Weather Service: Periods of rain with a high near 60. East wind around 11 mph. Chance of precipitation is 90 percent.

This is really early. Where can I get coffee?

The event is sponsored by Dunkin' Donuts, so organizers are obviously encouraging spectators to grab a coffee at one of the chain's many locations along Broad Street (you can find those here.) But if you're visiting from out of town and want something unique and local, here are some other shops near the route:

• A free tailgate with food, beer and massages will start at 9 a.m. at FDR Park. More information on that here.

• There’s a free event at Frankford Hall starting a noon, hosted by ACCT Philly. They’ll be collecting donations for homeless pets, and if you RSVP on Facebook, you’ll get happy hour specials from noon to 2 p.m.

• Three Monkeys Café in the Northeast is hosting an after party starting at 2 p.m.

• XFINITY Live! will be hosting an after party starting at 9 a.m. Admission is free for all runners. The band Bangarang will be performing.

Know of an after party we left out? Let us know: daniel@phillyvoice.com.

Can I pump my fists in the air like Rocky when I finish?

Please don't ah, sure, why not, you've earned it!