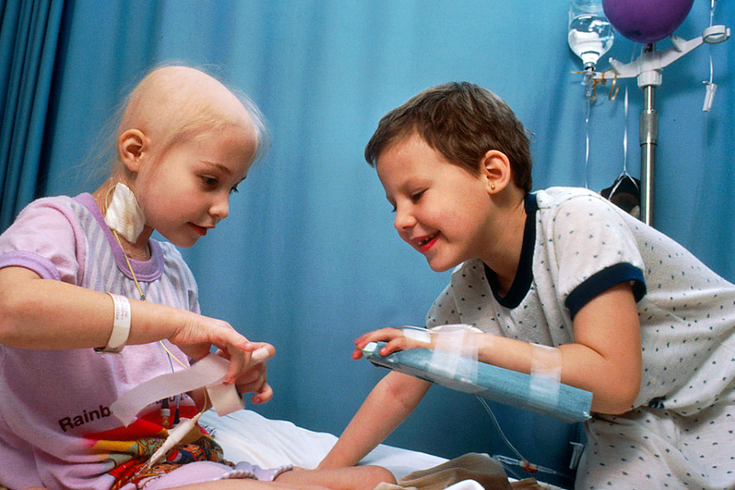 Ewing sarcoma treatment usually begins with chemotherapy and then surgery to remove the cancer afterwards.

Children and adolescents with metastasized Ewing sarcoma have a lower survival rate than those whose cancer cells remain at the primary tumor site.

However, a new discovery by researchers with St. Baldrick's Foundation and the University of British Columbia offers hope that the cancer can be stopped from spreading to other parts of the body.

The scientists discovered that these specific cancer cells turn on a protective shield to defend themselves while circulating in the bloodstream, looking for new locations to grow.

"What we found was that Ewing sarcoma cells are able to develop an antioxidant response that shields them and allows them to survive as they circulate. This is similar to a person in the Arctic having to put a thick coat on before they go outside. If they don't shield themselves, they are exposed to dangerously harsh conditions that they may not survive under," said senior author Dr. Poul Sorensen, a scientist at BC Cancer and professor of pathology and laboratory medicine at the University of British Columbia.

"What's exciting about this study is if we can target the cells in circulation then maybe we can prevent metastasis from occurring. So that's the really big goal of this research."

Ewing sarcoma is an aggressive form of bone cancer that can be fatal when not caught early enough. The tumors grow in the bones or the soft tissue surrounding the bones of the legs, pelvis, ribs, arms or spine.

When these cancer cells metastasize, they usually spread to the lungs, bones or bone marrow. Although it is very rare – about 250 children and young adults in the U.S. are diagnosed with Ewing sarcoma a year – it is the second-most common bone cancer of this population.

While Ewing sarcoma isn't an inherited cancer, it does involve chromosomal changes that occur after birth. A child's own genetic makeup and prenatal development determines if he or she will have it, according to St. Jude Children's Research Hospital.

The most common symptoms include swelling and soreness around the tumor site, a low fever, fatigue, weight loss, bone pain that worsens during exercise or at night and limping. The challenge in getting a prompt diagnosis is that these symptoms often are first attributed to growing pains, infection or another medical condition.

Seventy percent of children with this cancer are cured by using current treatment approaches, usually chemotherapy first and then surgery to remove the cancer afterward. If the cancer spreads though, the survival rate is less than 30%.

Not all cancer cells are able to become metastatic. Previous research has shown that there could be genetic reasons why certain tumors will mutate and spread while others don't.

The study, published in Cancer Discovery, showed that when a naturally-occurring gene located on the surface of the cancer cells, known as IL1RAP, is turned on, it allows the cells to create a protective shield that makes it easier to spread.

The gene is rarely expressed in normal tissue and because of this, researchers will be able to develop treatments that target the proteins without damaging any non-cancer cells, explained Dr. Haifeng Zhang, a University of British Columbia post-doctoral fellow in Sorensen's laboratory at BC Cancer.

Researchers are working on developing antibodies that can target the gene.

Sorenson said their study shows that these antibodies bind to the outside of the cell, actually killing it. Researchers are hoping to have a new immunotherapeutic treatment for Ewing Sarcoma ready for clinical trial in the next year or two.

Other studies are also investigating whether this shielding behavior is used by other cancer cell types, including acute myeloid leukemia, melanoma, pancreatic adenocarcinoma, central nervous system tumors, and in some types of lung and breast cancer.

Pediatricians urge parents to make sure their children and teenagers get regular check-ups and follow up with any referrals to specialists. When Ewing sarcoma is diagnosed early enough, treatments are more successful, researchers stress.