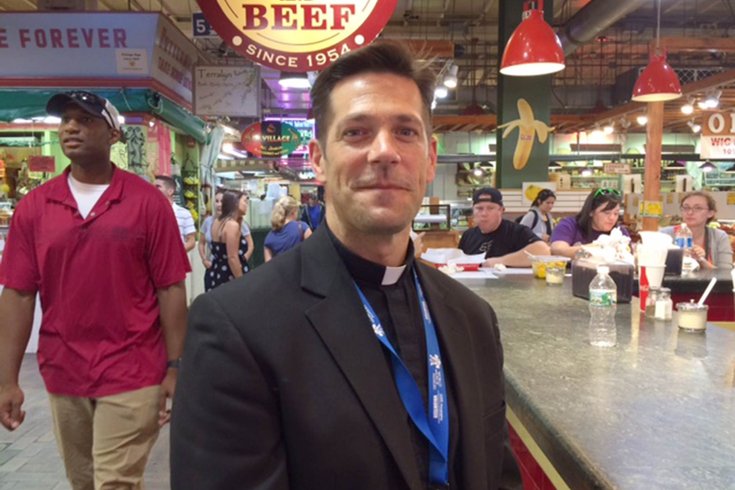 The Rev. Michael Schmitz, a campus minister in Duluth, Minnesota, stopped by the Reading Terminal Market while in town for the World Meeting of Families. Pope Francis is “trying to proclaim joy in a proactive way,” he said.

Excitement abounds among the Catholic pilgrims gathering at the Pennsylvania Convention Center the last two days for the World Meeting of Families.

As rewarding as the many keynote addresses and breakout sessions of the conference might be, there is little doubt what is setting the multinational crowd abuzz.

Pope Francis arrives Saturday in Philadelphia to celebrate the conclusion of the World Meeting of Families and serve a papal Mass on the Benjamin Franklin Parkway.

The papal hype has escalated since the Vatican first announced his visit more than 10 months ago. It sure isn’t dying now.

Osunde previously saw Pope John Paul II twice – in the Philippines and Spain – and Pope Benedict XVI once in Spain. She could not hide her excitement to see Pope Francis, whom she said is showing the world how to live a simple, Christian life.

“The Mass – we’re looking forward to it,” Osunde said. “It’s going to be like the last Mass he held, in Cuba. … He’s going to bring salvation to the world.”

Some 1.5 million people are expected to flood Center City on Sunday, when Pope Francis concludes his first trip to the United States with a papal Mass at Eakins Oval.

“People mistake Pope Francis being authentic for him being a progressive, which he’s not,” said the Rev. Michael Schmitz, a campus minister in Duluth, Minnesota. “He’s right there on doctrine."

“He speaks from the heart, and they mistake that for him being liberal. That’s a mistake. What he’s done is he has taken faith to an interior place,” added Schmitz, who maintains an active ministry on YouTube and also does podcasts.

“He’s trying to proclaim joy in a proactive way,” added Schmitz, who will miss the pope in Philadelphia; he’ll be back in the Midwest on Friday night.

The papal visit also includes a speech at Independence Hall, an appearance at the Festival of Families and a visit to Curran-Fromhold Correctional Facility. He will stay overnight at St. Charles Borromeo Seminary in Lower Merion.

'He will be impressive'

Augustus deSimone of West Chester will be among a group of seminarians who will greet Pope Francis when he arrives at St. Charles Borromeo on Saturday following a morning Mass at the Cathedral Basilica of Saints Peter and Paul.

“It will probably be like, ‘Wow, this is real,’” deSimone said. “You see pictures of him on TV and stuff. Then you’ll see him right there.”

The seminarians also will pose for a photo with the pope. deSimone recognizes this as a once-in-a-lifetime experience of which most seminarians only could dream.

“It’s kind of surreal,” deSimone said. “It’s a blessing. You feel lucky that you get to be here when he’s here.”

Most pilgrims have come to Philadelphia without any assurances that they actually will catch a glimpse of Pope Francis.

The pope will parade around the Parkway on both Saturday and Sunday to provide as many people as possible an opportunity to see him up-close. Otherwise, most pilgrims will see him on the 50 Jumbotrons placed throughout Center City.

Barry O’Donnell, of Naperville, Illinois, is not sure where he’ll be on Sunday when the pontiff takes the altar, but he recognizes the excitement of a papal Mass. He previously saw Pope John Paul II at World Youth Day events in Rome and Toronto.

Pope Francis has been credited with sparking excitement not witnessed among Catholics for some time. His charisma, merciful tone and willingness to address contemporary issues has endeared him to many non-Catholics, too.

That endearment even has played out in the varied marketing ploys witnessed throughout the Philadelphia region. Various beers, cheeses and pizza boxes, among other products, have taken the name or depicted the image of Pope Francis.

Bobbleheads and plush dolls are being sold at the official World Meeting of Families store. T-shirts, posters and bags bearing the pope’s image also are available.

But for most pilgrims, the papal visit is more than just a spectacle. It’s a rare opportunity to see and hear the central leader of the Catholic church.

“He is in the same line as his predecessor, in terms of doctrine,” said Martin Therer of Bromont, Quebec. “He’s very good with the pastoral approach. He will be impressive.”