Carter Hart's parents experienced Flyers' debut with him: 'With all of the pacing I did tonight, I’ll probably be more tired than Carter tomorrow' 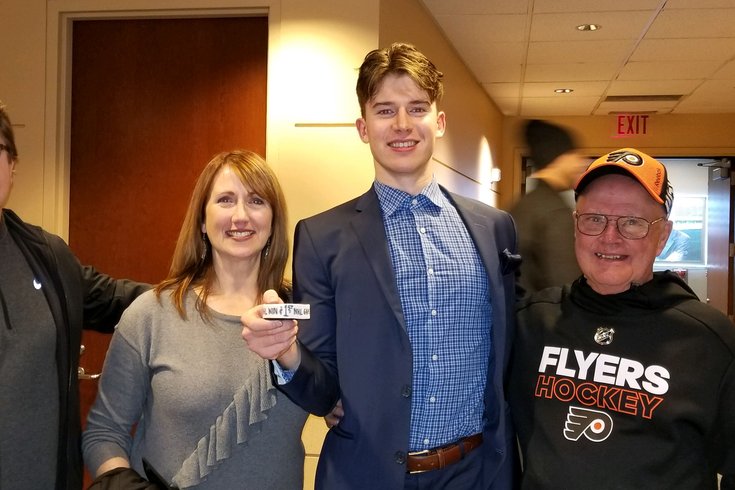 It gave the long, tough talks in the red Tundra some meaning. As it did the tears, and the frustration, and the many, many broken goalie sticks, the splinters of which still populate a piece of the Hart garage in Sherwood Park, Alberta, Canada.

Tuesday night marked a possible new beginning for the Philadelphia Flyers, and in a sense, signified a happy ending to a winding journey that started when Carter Hart was four years old and told his parents he wanted to be a goalie.

Hart steered away 20 of 22 shots in becoming the youngest goalie in Flyers’ history to win a game, as the Flyers outlasted the stumbling Detroit Red Wings, 3-2, at the Wells Fargo Center in Hart’s NHL debut.

For John and Shauna Hart, Carter’s parents, and Parker Fowlds, Carter’s billet who he lived with when he played for the Everett Silvertips in the WHL, it was a twisting, emotional odyssey that concluded with tearful hugs and kisses in the Flyers’ family area after the game.

“I think having my parents here is what I’ll remember the most about this,” said Hart, 20. “I want to be up here, obviously, for the rest of the year and make sure I come to the rink every day and work as hard as I can to make it happen.”

Carter Hart played one game Tuesday, John and Shauna must have played about 30 between them. John couldn’t sit still, pacing throughout the Wells Fargo Center, even stopping for a moment to take a picture with Gritty. Shauna and Fowlds sat in their club-level seats internalizing, far more nervous than Carter was.

“This has been a dream come true, not just for Carter, but for myself, my wife and Carter’s sister, and it brings me back to the tough talks in the red Tundra, and the broken sticks, and the tears and everything that goes with reaching the NHL,” John Hart said. “I couldn’t sit still. I was far more nervous about this than Carter was.

“The winning and losing, you live every moment with your child. Carter is a young man now, but he’s still my son and he’s still young in some ways. He looks after all of his own bills, he does his own laundry, and he came home one time in Allentown and the lights were out, because he forgot to pay the electric bills.

“Those are the growing pains of a young hockey player out there living alone for the first time. My wife and I couldn’t be more proud of him — and the way the Flyers played, they played hard for Carter. I don’t typically sit and it hasn’t changed since Carter was in his second year at the bantam level. This was a long time coming, and there were times Carter would wake me up in the middle of the night.”

That’s because Carter would be doing ball drills to fill the time because he couldn’t sleep. It’s just another example of Carter’s determination to reach the NHL.

“What do you say to a kid that committed, ‘10 more minutes and it’s bed time,’ and it’s the network that surrounds him, with five goalie coaches, and Parker, and John Stevenson, there’s no way Carter could have gotten to the position he is in today without the team around him,” John Hart said. “I’m sure with all of the pacing I did tonight, I’ll probably be more tired than Carter tomorrow.”

Scott Gordon, the Flyers’ interim coach who was Carter’s coach at Lehigh Valley before being called up to replace the fired Dave Hakstol, has a great familiarity with Carter.

“It’s a big relief for everybody,” Gordon said. “The record over the last little stretch here has been frustrating for everybody. Myself, you always want to start off on the right foot. For Carter, it was a real fair game for him to have as his first game.

“He wasn’t under a whole lot of duress until the end, and just the team to go through what it’s had to go through to come in here off a road trip like that, the first game back at home is the toughest. I thought our energy level was great throughout. It was a good way to start.

“The biggest thing is we didn’t beat ourselves. We managed the puck.”

And the Flyers protected Hart.

“After the third or fourth shot, I got into the game and got the feel,” Carter said. “It was a weird game where shots weren’t coming in waves every few minutes. We did a really good job of shutting them down. I just played the game.”

After the game, Carter went back to the Flyers’ family area where he met his parents and Fowlds. Shauna grabbed her son and hugged him, choking back tears. Then John and Fowlds hugged the new Flyers’ goalie, who was presented with the winning puck from his first NHL victory.

“My heart rate has calmed down,” John Hart said, laughing. “This is the first one of hopefully many.”

For once this season, the Flyers held some relevance and there was a true warmth in the bowels of the Wells Fargo Center in a season that until Tuesday night had been nothing but frigid.