Struggling to turn tragedy into positivity, they mourn a man who died months after savage beating outside Olney gas station

They focused not on the brutal beating that led to seven comatose months ending in death, but on a troubled life that featured times both good and bad.

The several dozen people who headed to Manayunk’s St. John the Baptist Roman Catholic Church also prayed that the tragedy that took Robert Barnes away from them could remind people to care for the weakest among them.

“We need to work a little harder to bring mercy, compassion and justice to the darker places of our world,” said Sister Mary Scullion, who welcomed Barnes’ family, friends and well-wishers to the ornate house of worship. “Violence is everywhere, and it gets exacerbated around our most vulnerable: the children, the homeless.”

Barnes, a 51-year-old Roxborough native who battled alcoholism and the perils of homelessness, was brutally attacked outside a Sunoco gas station in Olney on April 7. He remained in a “vegetative state” until he died on Nov. 25.

"Most days weren't as awful as we'd imagine, or at least that's what he'd want us to believe."-- Ashley O'Leary

The death was ruled a homicide shortly thereafter, but his sister Diane said before the service that the family has yet to hear whether charges against three adults awaiting trial and three youths already sentenced will be elevated to that level, though it is likely to happen.

Footage from nearby surveillance cameras allegedly shows the group beating Barnes with their feet and fists, a hammer, a piece of wood and pepper spray.

That video brought widespread attention to the case, but the tenor of Saturday’s funeral/memorial service – Barnes’ remains were in an urn near the altar from which Father Kevin Lawrence led the Mass – was on the deceased, not the incident itself. 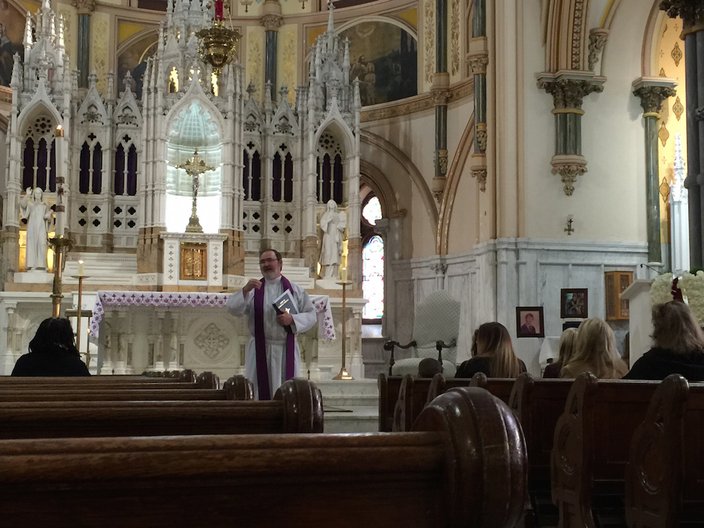 Mourners checked out photo collages showing Barnes during happier times in his life, from youth to later years.

In a welcoming address, Scullion – the Philadelphia nun who tirelessly advocates on behalf of the city’s homeless – said she hoped the loss of Barnes could serve as an impetus for “daily acts of healing and compassion.” She also took note of the Barnes’ family push to provide sneakers and boots for the city’s homeless.

“They’re committed to bringing goodness out of their personal tragedy,” she said.

The service itself adhered to that spirit, in the tenor of both songs like “Amazing Grace” and “Let Their Be Peace On Earth,” and readings like Matthew 25: 31-40 (“The King will reply, ‘Truly I tell you, whatever you did for one of the least of these brothers and sisters of mine, you did for me.’”).

In eulogizing the deceased, Father Lawrence spoke about a man who knew struggles so well that he helped others when they most needed it because "he knew from his own experience the needs of people around him." 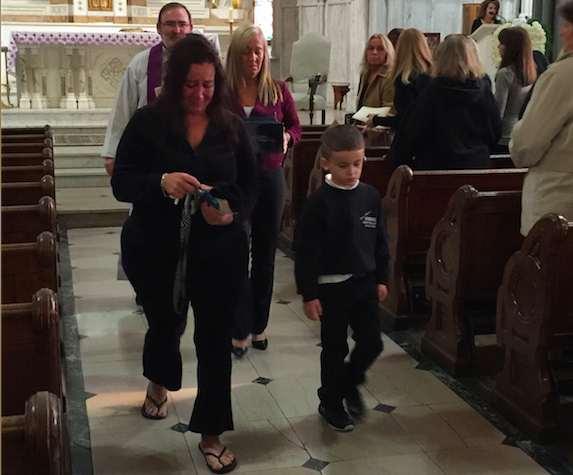 Loved ones leave the church after Saturday's memorial Mass for Robert Barnes in Manayunk. (Brian Hickey/PhillyVoice)

Barnes' cousin Bernadette and her daughter Ashley O'Leary offered reflections that shied away from any conceit of sugarcoating, for the man they were there to remember did not lead an easy life.

They spoke of pitched battles with alcoholism that resulted in a life on the streets that often veered toward violent situations and, in one case, jail. They also rued the fact that they couldn't tell Bobby that his mother died since he was in a vegetative state at the time.

"Most days weren't as awful as we'd imagine, or at least that's what he'd want us to believe," said Ashley O'Leary through tears near the end of the service, recalling holding his hand the last time she saw him before his death and "thinking how unfair life had been to him."

"To see him laying there lifeless," she said, "is something I wish I could forget."

With a message urging attendees to treat the homeless like the human beings they are instead of ignoring them on the streets, and a family mission to jumpstart a shoes-for-the-homeless program, memories of rougher times could soon relent. 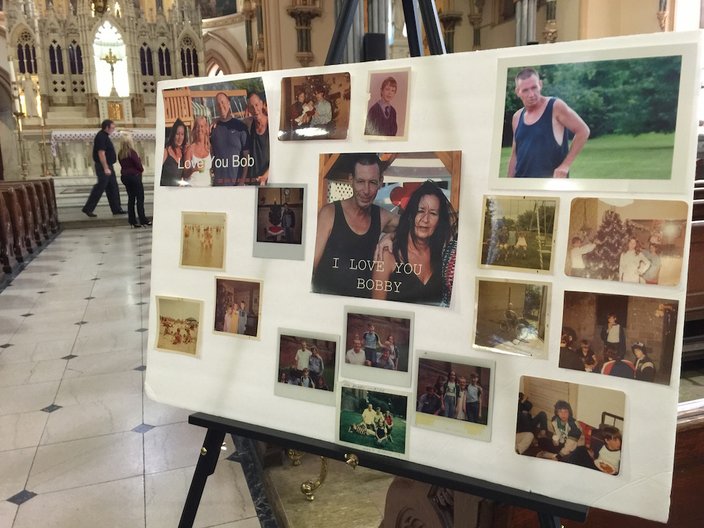 Photographs or Robert Barnes were on display at Saturday's funeral Mass in Manayunk. (Brian Hickey/PhillyVoice)