Eagles RB Darren Sproles: 'If I had to be full go right now I could' 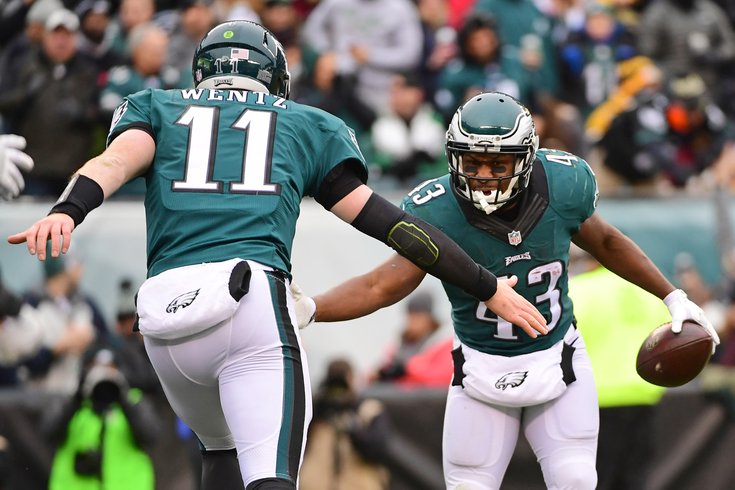 It wasn't as dramatic as other famous unretirements, like Michael Jordan or Brett Favre, but Darren Sproles had more or less decided the 2017 season would be his last as a pro before it kicked off a year ago.

And then Week 3 happened — and the speedy little running back saw his 12th season cut short by a freak accident. Sproles tore his ACL and broke his arm on the same play. And, at 34, he had to start from scratch and rehab from surgery.

"After the way I went out last year, if I retired after that I think I would have thought later down the line that it wouldn't have been right for me," Sproles said Tuesday as he walked off the practice field during Eagles minicamp.

There is no shortage of motivation for the soon-to-be 35-year-old return specialist and expert wheel and screen route runner. He not only wants to end his career on an actual, non injury-ended high note but also has the chance to lead a youthful running backs group as a leader.

"Every day, no matter if he was calling or texting — he is the leader in the room, no doubt, since he got here," Eagles running backs coach Duce Staley said. "It's about what he brings to the table and how hard he works."

Sproles wasn't just quietly licking his wounds during the Eagles' 13-3 campaign — he was continuing to pitch in and lead even from across the country. The back has worked extremely hard so he can be ready in 2018 to potentially be on the field for the Super Bowl, not watch it from the sideline.

"Man, it was the toughest time ever," Sproles said of watching Super Bowl LII. "That’s why I worked so hard to get back, so we could make another run at this thing."

Sproles says he is feeling pretty much fully healthy, which is good news for the Birds and their running back by committee approach. Having a back like Sproles offers the offense yet another look to make things more difficult for defenses.

"The knee is feeling great the whole offseason," Sproles said. "I have been rehabbing and working out. If I had to be full go right now I could, but they have to hold me back a little bit."

Holding Sproles back, as those who know him are fully aware of, is nothing new, Staley jokes.

"I laugh all the time," the coach said. "We have walkthrough days on Saturday and he's the only one who is full speed. You have to slow him down. If you don’t, he is running up and down the field."