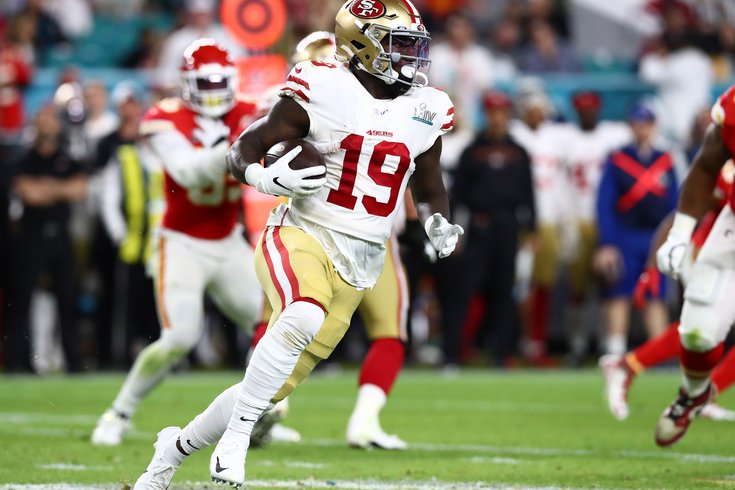 49ers standout receiver Deebo Samuel's status for Week 14 is up in the air, but looking good.

Get your fingers ready to hit command-f, or control-f, to search for your injured player below.

The injury list of fantasy-relevant players after Week 13 is pretty substantial, and is by far the longest we have compiled this season. For some team owners who are out of the playoffs or who have clinched their spot, that is not the end of the world. But for others, fighting for their lives in what is the last week of the regular season in many leagues, the information below will be key in helping you put together a winning roster in Week 14.

Here's a look at the latest news on some key injured fantasy football players (not including players on teams with byes this week — the Eagles, Patriots, Colts and Dolphins):

As the Cardinals get healthy again the NFL should be taking notice. A week after the impressive returns of Kyler Murray and DeAndre Hopkins, Arizona expects running back Edmonds to return from his IR stint in Week 14. Nothing is official yet, of course, but he could be on the field in their NFC West showdown against the Rams this weekend. That could dig into the breakthrough performances James Conner has been turning out.

Cook's shoulder continues to keep him from participating in practice, which is probably a sign that he'll miss another week, giving Alexander Mattison another start and fantasy relevance in Week 14.

The Niners stud wideout (and sometimes running back) is listed as being day to day and the team apparently is optimistic he'll be good to go Sunday against the Bengals.

Thielen suffered a high ankle sprain in Week 14 and could miss some time as the Vikings try to make a push for a wild card spot. His absence from the lineup could elevate K.J. Osborn to fantasy relevance.

Swift's status right now is really up in the air with reports after his shoulder injury last week that he would miss multiple weeks but others this week saying he has a chance of returning. Regardless, Jamaal Williams must be on rosters just in case this week.

Mixon hurt his neck in the Bengals disappointing loss to Los Angeles Sunday. We'll have to wait and see if he is a full participant in practice this week due to the ailment.

After missing Week 13, Waller appears to be day-to-day with a chance to go this weekend as he works back from a knee and back injury.

Gordon's absence the last couple games due to hip and shoulder injuries has welcomed rookie Javonte Williams into the fantasy arena, and he's been a force for owners patient with him. Gordon is expected to return to practice this week, according to Broncos officials, which could mean he returns in Week 14 and takes away a bit of Williams' momentum.

Thomas' knee injury was not as bad as had been feared, but he will still miss some time.

The ailing Titans have needed good news on the offensive side of the ball and Jones has been designated to return from the IR this week, which could give their passing game a much-needed weapon with A.J. Brown out.

The surging Bengals signal-caller dislocated his pinky finger last week, but is expected to be fine to play in Week despite an anticipated limited designation in practice this week.

Higgins had a monster game in Week 13, and a tweaked ankle shouldn't keep him from hitting the field trying to replicate his success in Cincinnati's next contest.

The Bears didn't get a very good performance at QB last week with Andy Dalton throwing four interceptions. The team is obviously hoping rookie Fields is good to go next week as the team tries to save its season, but head coach Matt Nagy says his availability to play will be an "ongoing discussion."

Collins is expected to be back for Week 14 in Houston, making Adrian Peterson's stint as the short yardage and third down back potentially short lived. We'll have to see what the RB's roles are next week.

Claypool re-injured a nagging toe injury and has missed practice early this week. Big Ben, too is roughed up a bit and was listed as a practice non-participant.

Wilson hurt his knee Sunday but reports say he should be fine in Week 14.

Davis will be shut down for the season as he has surgery on his "core," the Jets say.

Drake is having surgery on his right ankle and will likely be out for a while.

Another entry on New York's revolving list of wide receiver injuries, Golladay hurt his ribs against the Dolphins and was forced out of the game. He may miss Week 14.

Reports say that Jake Fromm will start in Week 14 for the Giants, with Jones out with a neck injury and Glennon in the concussion protocol.