Even if it isn't a real debate, Birds fans will turn it into one. That's just what Philly does. 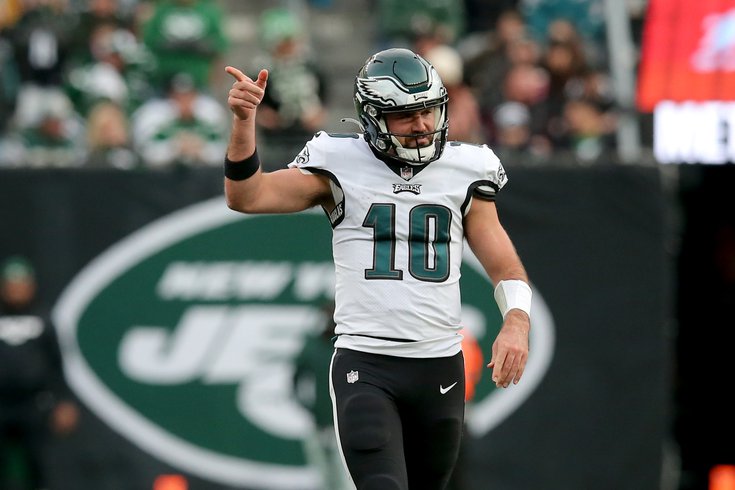 If crabcakes and football are what Maryland does, you can call cheesesteaks and (quarterback) controversy Philadelphia’s jawn.

Everyone should have someone who loves them as much as modern Eagles fans love their backup QBs, a role Jalen Hurts once filled as the other side of the fence to the irreconcilable differences that eventually sent Carson Wentz to Indianapolis.

As the current incumbent, however, Hurts is now facing his midterm election as one of the only starters in the NFL where the backup, the charismatic Gardner Minshew, was expected to expand the offense, at least from a passing perspective.

Even the most optimistic Minshew maniacs couldn’t envision the first half of what turned out to be a 33-18 win over the New York Jets at MetLife Stadium Sunday.

By the NFL’s own definition Minshew was Curt Hennig, literally perfect.

The mustachioed, 6-foot-1 quote machine finished his first 30 minutes as the Eagles’ starter (out of necessity due to Hurts' balky ankle) by completing 14-of-15 passes for 188 yards with two touchdowns to Dallas Goedert and the perfecto passer rating of 158.3, the lone incompletion being a failed screen smartly thrown into the turf.

The Eagles certainly understood what was waiting for them if Minshew played well, especially with the team’s late bye week on tap.

Two non-stop weeks of, "Is Gardner better-equipped to get this team the seventh seed on the NFC side of the bracket? Let’s go to the phones. 610- ..."

On the inside, there is no controversy at the NovaCare Complex right now and the Eagles have made it clear that when Hurts is deemed healthy, he will return to the starting lineup much like running back Miles Sanders did despite the success of Jordan Howard and Boston Scott when he missed three games due to his own ankle injury.

"Of course" is halting the armchair personnel evaluators, though.

Unlike Sanders, who is significantly more talented than his backups, the same can’t be said about Hurts, who certainly adds more to the running game than Minshew, but the latter clearly handles the passing part of things with more efficacy.

The passing game was obviously cleaner with Minshew at the controls, running with more pace and efficiency as the third-year QB made quick reads and got the football where it needed to go. Of Minshew’s targeted throws on Sunday, a total of 18 went to five different receivers: Goedert, Kenny Gainwell, Quez Watkins, Sanders, and Jalen Reagor, with all 18 being completed.

In fact, the only targeted throws that went awry were two to DeVonta Smith — and one of those was a 50/50 ball in which Minshew gave the Eagles’ top WR an opportunity, something that resonates.

Even factoring in the haplessness of the opponent and the Eagles' birthright of always beating the Jets, it was an impressive performance.

Yet Sirianni felt the need to downplay things at least a bit.

“It always starts up front and how the protection is going,” Sirianni said. “I thought the protection was awesome. Not to take anything away from Gardner. He played a great game.”

Minshew himself wanted to compete with Trevor Lawrence in Jacksonville, so he’s not exactly a shrinking violet when it comes to lobbying for an opportunity.

“I think anybody that’s halfway competitive wants to play,” he admitted. “That’s what’s fun. That’s why you play the game. But I know that whatever role I’m in, I’ll give it 110% and do whatever I can for the team.”

Then came the personality, whether it was cracking jokes in the huddle on a 4th-and-1 that went the Eagles way on replay review or reacting to a fan who is dressing up like Minshew.

“Yeah, dude. That’s why I wear short shorts. Them legs, bro. Felt it right there,” Minshew smiled when discussing his power on the QB sneak.

As for the doppelganger, Minshew complemented his own “cool mustache.”

“Dude, I’ve kind of developed a relationship with him, because he always wore a Jim McMahon Eagles jersey and I thought that was so cool,” the QB said. “He had a headband and a cool mustache too, so naturally, we kind of get together. I feel like I see him every game. He’s always supportive.”

Dude, Minshew Mania has officially hit Philly and the [manufactured] quarterback controversy is here because that’s what Philly does.

“I think we all kinda know what to expect,” Goedert said when asked about the QB situation, “and whatever it is we gotta do our jobs to the best of our abilities and the team – very unselfish team – whatever happens, we’re all for it.”