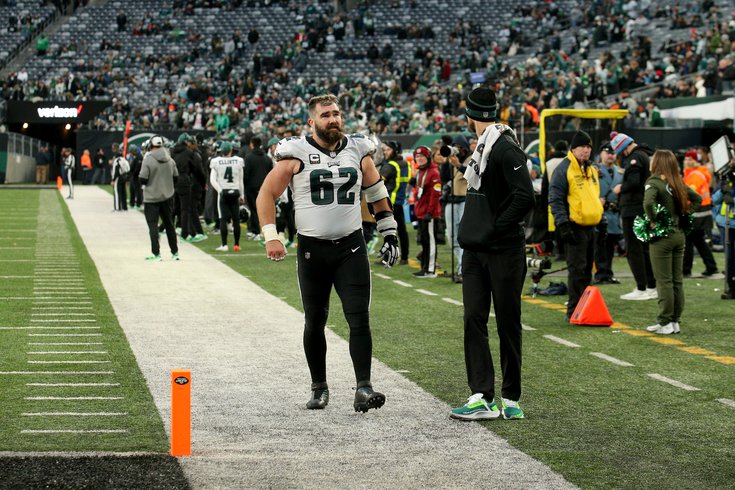 Jason Kelce was injured late against the Jets, but he'll have two weeks to try to recover in time to play the Washington Football Team.

In their Week 13 win over the New York Jets, the Philadelphia Eagles played 71 snaps on offense, and 59 on defense. Let's just get right to the snap counts, and some notes.

Analysis: The Eagles tried to facilitate the notion that Jalen Hurts was a game time decision, but the decision to start Minshew was made on Saturday, at the latest, and possibly earlier.

Hurts finished the game last week against the Giants. As such, it felt to me all week like Hurts would play, and that any uncertainly was fabricated by the team. Nope. I had the wrong read, and apparently so did the Jets.

CB Bryce Hall says they didn’t prepare for Minshew in practice. On a follow-up question, he backtracks a bit, saying Minshew and Hurts are similar so it didn’t matter that they didn’t practice for Minshew. #Jets

Minshew's numbers in the stat sheet probably looked better than his actual play on the field, but he was obviously very effective in the win, as the Eagles scored points on each of their first seven drives against a woeful Jets defense.

Analysis: Sanders got 24 carries for 120 yards on his 41 snaps, and he ran harder on Sunday than he has all year, in my opinion. He took the yards that were there, and then once he got to the second level tried to make defenders miss. There was less dancing in the backfield out of Sanders on Sunday.

Gainwell chipped in 54 yards on 12 carries, including this 18-yard TD run:

What a run by Gainwell!!!

That really was blocked up nicely, and Gainwell simply slithered through the maze of bodies for the score. He also caught 5 passes on 5 targets for 33 yards, and showed some un-Sanders-like awareness sliding down in bounds to keep the clock moving at the end of the game.

Analysis: Reagor's didn't lose playing time in the regular offense after a disastrous game against the Giants last week. He had 1 target on his 48 snaps, which he caught, for 7 yards. He also had 1 carry for 0 yards.

On a kick return, he let a kickoff bounce at the 1 yard line, which he then had to scramble to pick up, and was tackled at the 6. He also muffed a punt:

He ended up saving it but what an awful fair catch attempt by Jalen Reagorpic.twitter.com/3DFGdjurcD

Reagor was replaced by Scott as the kick returner in the second half. That's not enough.

MORE: Handing out 10 awards from the Eagles-Jets game | What we learned about the Eagles offense without Jalen Hurts

Analysis: Goedert had the second 100-yard game of his career, catching 6 passes for 105 yards and 2 TDs. The Eagles ran a lot of 13 personnel on Sunday, so Stoll and Jackson got a decent amount of action, though no targets in the passing game.

Analysis: The offensive line continues to be the strength of this roster.

Kelce got hurt on the second-to-last offensive play of the day, so his availability for the Eagles' critical Week 15 game against the Washington Football Team Week 15 will be worth monitoring.

Analysis: Sweat's sack of Zach Wilson on the Jets' fourth drive finally forced a Jets punt, after the Jets had scored TDs on each of their first three possessions. Javon Hargrave put his man on roller skates, forcing Wilson to retreat backwards, and Sweat cleaned him up coming around the edge. Sweat has been very quiet since the Lions game, but he finished the day with 1.5 sacks.

Analysis: Edwards is averaging 10.5 tackles per game over the Eagles' last 6 games. Edwards aside, the Eagles really need help at linebacker this offseason, and should spend legitimate resources to find one, either in the draft or in free agency. It's time.

Analysis: Nelson left early with a shoulder injury and did not return. Looking ahead, Darius Slay is likely to follow Terry McLaurin Week 15 against the Washington, and the Football Team hasn't really had a super threatening No. 2 receiver. Nevertheless, the sooner Nelson can return, the better. #Analysis.